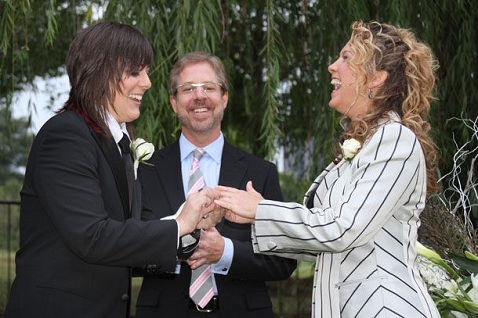 I don’t like to brag –– in fact, I love to brag –– but I saw today’s ruling by a federal judge against Texas’ gay marriage ban coming from miles away. Me, and just about every legal scholar with half a brain: In state after state over the last year or so, voter- and legislature-approved edicts against same-sex nuptials have been falling faster than the neighborhood I.Q. level after a Southern Baptist family moves in. (Cheap shot? Yeah, but I never said I was a gracious winner.)

Today’s Texas ruling will likely be overturned on appeal, but here’s the important point: Now the Supreme Court will be forced to clean up the mess created by a contradictory hodge-podge of lesbian and gay couples’ rights and restrictions across the states. There’s no guarantee that the Supremes will declare an implied right to same-sex marriage in the U.S. Constitution, which of course would legalize it everywhere instantly. There’s a good chance they’ll sidestep it the next time they hear a relevant case and kick this baby down the road (again). But ultimately, probably sooner than later, the equal protection clause of the 14th Amendment simply cannot allow homosexual people to be singled out as unworthy of a marital contract.

I could rant some more about hillbillies, rednecks, and homophobic bigots. Proudly ignorant, mean-spirited folks deserve to be called out, no matter how they justify discrimination. But instead, let me finish this blog post with a personal anecdote: Over the last year or so, on Facebook and Twitter, I’ve watched as at least half a dozen gay dudes in their 40s –– men I went to high school and college with –– announced wedding plans and posted pics of their big day. (In states that allow gay marriage, of course.) There’ve been happy tears, but more than that, there’ve been these slightly disbelieving, mischevious smiles that say: “Is this real? Am I really getting away with this?” All they wanted was the same (by no means guaranteed) shot at relationship security that heterosexuals get every time they sign a marriage contract.

It looks like even in right-wing, bad-ass Babtist Texas, gay people will soon get that chance. Go pick on someone else, gay haters. This issue is now closer to settled except for the post-game whining.