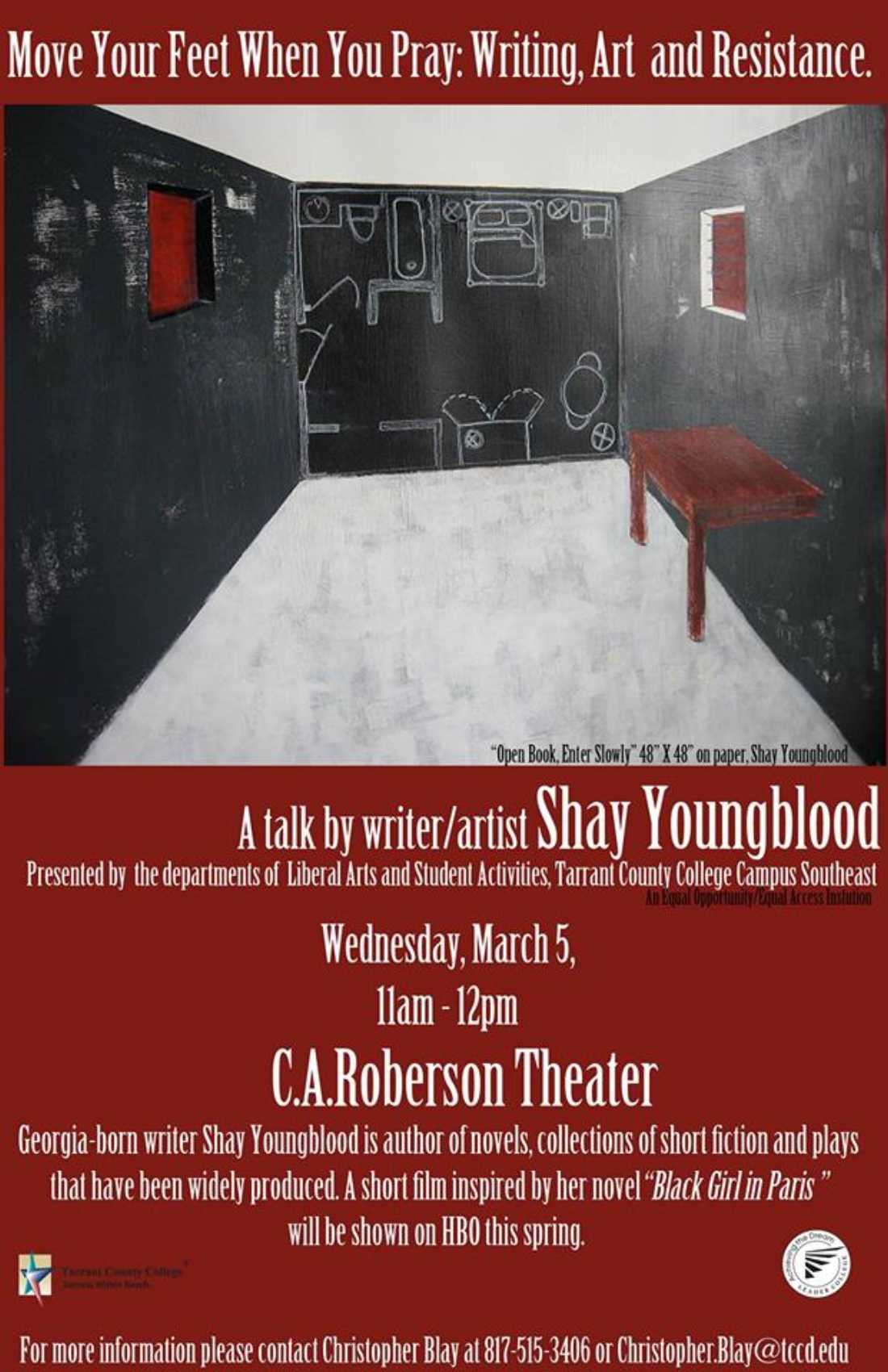 Shay Youngblood is many things: novelist, artist, playwright, Peace Corps volunteer. This evening, the writer in residence at the Dallas Museum of Art gives a talk called Move Your Feet When You Pray, detailing her creative journey (detouring for a few years after the trauma of the 9/11 terrorist attacks) and how her social work impacts her work and her teaching. The talk is at 11am at C.A. Roberson Theatre, 2100 SE Pkwy, Arlington. Admission is free.

The intimate confines of the Renzo Piano Pavilion should be a nice venue for one of the world’s great classical guitarists, Sharon Isbin. She’ll be paying tribute to Benjamin Britten during his centennial year by playing his Nocturnal after John Dowland, as well as Andrew York’s Andecy, a resonant work composed as an improvisation in a French village. The concert is at 7:30pm at the Renzo Piano Pavilion, 3333 Camp Bowie Blvd, FW. Tickets are $60. Call 817-498-0363.

The foofaraw over Philadelphia’s Barnes Collection inspired Thomas Gibbons’ 2004 play Permanent Collection, which is about an art museum that descends into racial controversy when an African-American director takes over and finds his wishes clashing with those of the museum’s recently deceased, eccentric, incredibly wealthy owner. UNT Theatre’s production of this play runs Wed-Sat at Radio Television & Performing Arts Bldg, 1179 Union Cir, Denton. Tickets are $5. Call 940-565-2428.

The recent drop in the rate of America’s childhood obesity would seem to imply that the Super Sprowtz are having an effect. The talking giant vegetables take their kids’ show to Arlington to teach children to eat healthier. Can eating vegetables, or a musical show about the subject, be fun? We’ll find out. The show is at 2pm at Levitt Pavilion, 100 W Abram St, Arlington. Admission is free. Call 817-543-4301.

Yet another movie-based science exhibit comes to the Fort Worth Museum of Science and History. In Indiana Jones and the Adventure of Archeology, Steven Spielberg’s films are used to introduce this branch of science to kids and show them how it has changed through the decades. Presumably the young ones will learn that archeologists handle bullwhips much less than they used to. The show runs Mar 8-Aug 10 at 1600 Gendy St, FW. Tickets are $11-21. Call 817-255-9300.

Led by Dennis Coyne, Flaming Lips frontman Wayne Coyne’s nephew, the psych-rocking Stardeath & White Dwarfs hail from Norman, Okla., but have played Fort Worth a bunch over the years. For Dennis and company’s next local show, tonight at Lola’s Saloon, they’ll be joined by Dallas’ Blackstone Rangers, Brooklyn’s Dead Leaf Echo, and Fort Worth’s Ice Eater. The music gets going around 8pm at 2736 W 6th St, FW. Cover is $10. Call 817-877-0666.