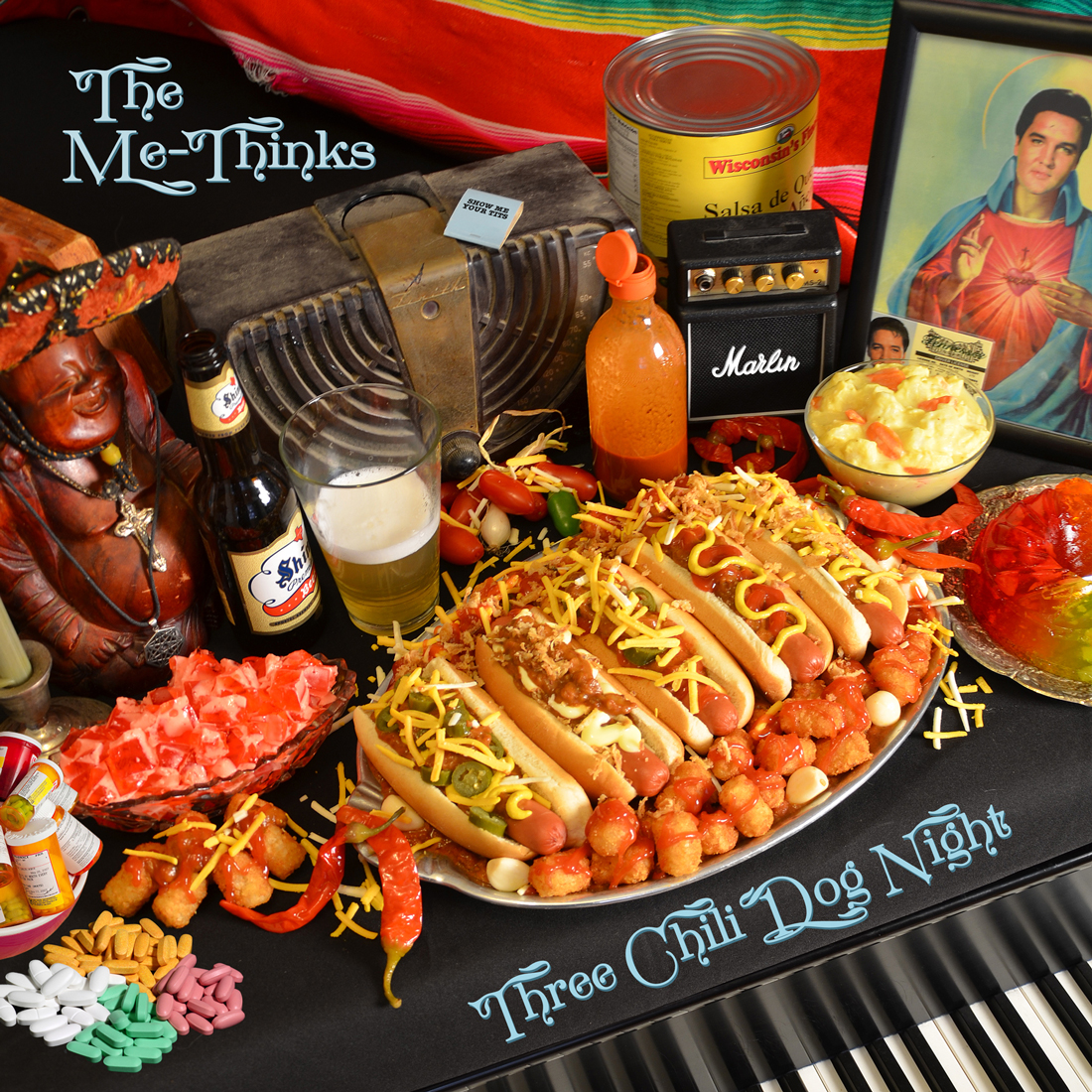 To his left from the Boswell High School parking lot was home. To his right, the way to Haltom “Rock” City. When he was a 17-year-old senior in 1989, Ray Liberio started turning right after school. And he’s never looked back. Haltom City, he remembered, was full of kids who just wanted to jam. “I just met a bunch of like-minded people who liked music, liked to play, and it’s been the same guys ever since,” he said.

Easily the most popular rock outfit to come from that tiny Tarrant County suburb over the years is Liberio’s primary musical endeavor, The Me-Thinks. Self-proclaimed “Fort Worth’s shittiest band,” the quartet of vocalist/bassist Liberio, guitarists Marlin Von Bungy and Mike Bandy, and drummer Trucker Jon Simpson is about to release an EP, the follow-up to a 7-inch record (“WazWolf,” “Greasy Lightning”) from 2011. Three Chili Dog Night was recorded last year. Or maybe two years ago. Liberio isn’t sure. “It all goes so fast!” he said recently over beers.

What the 42-year-old native New Yorker does remember is that the recording process was similar to the one for the 7-inch: He and his bandmates brought their gear (and their BB guns) to The Echo Lab in Argyle for a two-day session with owner/producer Matt Barnhart and Andre Edmondson, Fort Worth’s go-to soundman. It was summertime. “We’d roll some tape,” Liberio said, “and [Barnhart] would say, ‘OK, you guys go hang out while I make some adjustments,’ and we’d go out on the back porch, shooting BB guns, barbecuing. It’s really a good time.”

Like the band’s sojourn in the studio, evidently, Three Chili Dog Night is a blast. Opening with chugging, muted riffage and rumbling toms, the first track, “Loudensucke,” grinds and grooves and goes through a couple of small changes before the massive chorus pops up, “Brown bottles clank! / No drink goes undrank! / Whiskey, wine, and beer! / Pass those three / Over here!”

Shostakovich this is not, but it’s not supposed to be. “I want to keep it fun,” Liberio said.

“Loudensucke” takes its name from a comment made by a “fan” after a show a while back. “Man,” the guy said, “your band is loud and sucky” (also the last line of the song).

“It’s about having a good time,” Liberio continued. “We do care, even though it’s not seen that way sometimes.”

One source of inspiration is The Loco Gringos, a Dallas band from the late 1980s that young Ray and all his friends loved. For one show, Liberio recalled, the frontman came out wearing nothing but a huge brown barrel with suspenders. “Playing his guitar!” Liberio remembered. “They didn’t take it seriously, but at the same time they always showed up, and they always kicked ass. … It’s something that has stuck with us.”

The long hiatuses between recordings, Liberio said, owe chiefly to a lack of funds. “We gotta hustle stuff to make money,” he said. “That’s why it takes us so long to put out each release. Not that it [would happen quicker] if we had money. We’re not very prolific.”

All of the guys in the band also have day jobs (Liberio is a graphic designer), and Von Bungy is the proud parent of an 8-year-old son. Playing shows has become vital for keeping Me-Thinks coffers in the black, and the band has been gigging steadily since Day 1, circa 1999. Though every Me-Think except Von Bungy dabbles in other musical projects (Liberio’s got several, including Vorvon and FTW), the guys still get together every Wednesday at their rehearsal space in Haltom City and still kick out the M.F. jams. “A lot of friends come by,” Liberio said. “The jam room’s kind of a clubhouse, anyway, but Wednesday nights are definitely clubhouse night. We get through a set, maybe two, if we’re lucky, and watch whatever rock ’n’ roll DVDs are out there and goof off with our friends. … I don’t know what we’d do if we stopped playing.”

Part of creating a fun environment –– via a live setting or a slab of vinyl –– involves, well, having fun. And not being a dick. “We don’t want to be one of those bands where it’s like, ‘Ugh. These guys. They want this. They want that.’ We don’t have a guarantee. I wouldn’t know what to ask for a guarantee. Usually our bar tabs are a lot bigger than our payouts.”

The band’s album-release show at Lola’s Saloon on Saturday will include free chili dogs and a Me-Thinks set full of old tunes and odd covers. But don’t expect to hear anything off Three Chili Dog Night (whose cover art features a photo of five delicious-looking chili dogs). “You’re gonna have to buy it at the show to find out what’s on it!” Liberio said.

The Me-Thinks aren’t big on interpreting other people’s stuff, but they aren’t above it either. Case in point: “Million Dollar Gumball,” the last track off Three Chili Dog Night. The spiky, punky tune was written years ago by an older kid in Liberio’s neighborhood. “Technically, he doesn’t know,” Liberio said, laughing. “But I have his address, and I always send him stuff, so I’m gonna send him the record and wait for his reply. He could be like, ‘You mother-fucker! You stole my song!’ I’m sure he won’t. I would hope he would be stoked and flattered, because we put it on there out of admiration. And for a lack of a fourth song.”

The songwriter moved to California years ago, Liberio said. “It’s weird how everybody’s lives have changed,” he added. “Ours kind of have stayed the same. For the most part!”