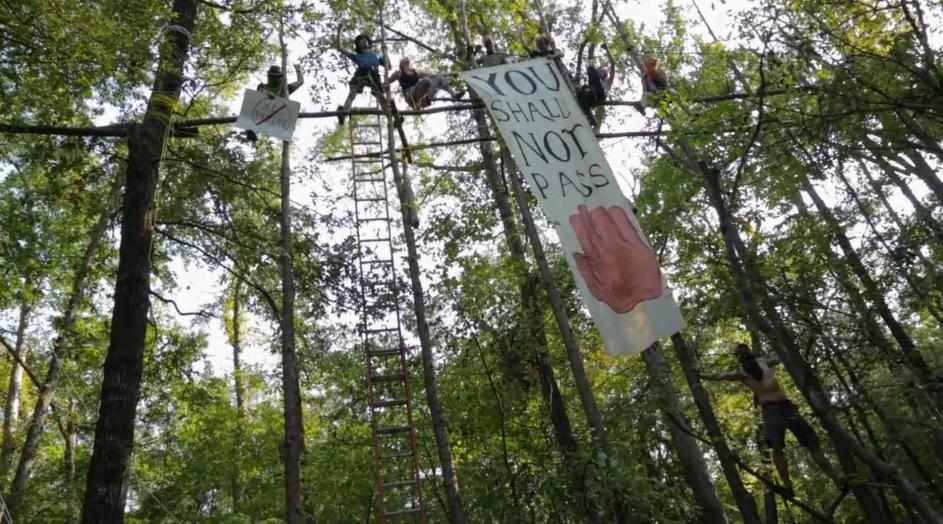 In Dallas this week, North Texans can get a peek at Above All Else, a documentary that deals with the construction of the southern leg of the Keystone Pipeline and the fight of the people of Winnsboro to stop it. Produced in part by Julia Butterfly Hill and Daryl Hannah and directed by John Fiege, the movie tells the story of David Daniel, the man on whose East Texas land the now-famous Tar Sands blockade — a tree house village where sitters stayed for weeks, preventing the Keystone pipeline from being built — was constructed (“Drawing a Line in the [Tar] Sand,” Oct. 17, 2012). The film, which got its world premiere at SXSW in Austin a few weeks ago, will be shown on Friday and Saturday at the Angelika Theater as part of the Dallas International Film Festival.

With the northern section of the pipeline still under consideration by the U.S. State Department though, filmmaker Fiege and Julia Trigg Crawford — who has her own fight going on against Trans-Canada and is featured in the film as well — hope the film will light a fire under people.

“The film is about what happens to real people when the pipeline comes through,” said Crawford (“Your Land is My Land,” April 11, 2012). “You cannot see this film and not have an emotional connection to this fight. It humanizes this fight.”

Fiege, who’s been focused on environmental issues for years, told Static that   a cancer diagnosis provided his impetus for making Above All Else. “I asked my doctors why I got a sarcoma. I didn’t understand it. I had no genetic reason for it, I was healthy, in my mid-30s, and I didn’t smoke. They told me it was just the result of environmental impact. So I decided to make a film about the impact of oil drilling on humans. I thought it might be my last film, so I wanted to get to the heart of things. And when the Keystone issue emerged, well, it caught my attention.”

What Fiege saw with the Keystone was a sea change in the level of protest against the line, “a coalition of very different types of folk coming together to stop it before it was built. We saw protests the scale of which we hadn’t seen since the 1970s.”

Daniel, who is under gag order not to talk about the pipeline or the protest, was at the heart of the Winnsboro blockade. A stuntman for 20 years and a high-rope rigging expert, he helped plan and execute the tree houses that temporarily blocked the pipeline and roused protests against it all over the country.

“My intention was to make a film about someone who was going out there to try to make things better and what that process and journey looks like,” said Fiege. “Daniel risked everything making that stand.”

The trailer for the documentary can be seen at aboveallelsefilm.com. Fiege told Static he’d love for someone to arrange a showing — or several —in Fort Worth as well.