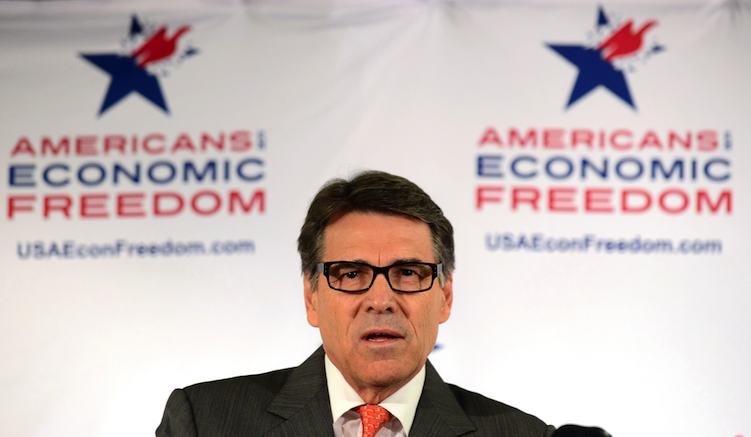 With today’s announcement that Rick Perry will return to New York to woo business owners down to Texas, I trust that the governor will try very hard to represent himself well. No yammering about states’ rights, no mention of the tragic (and preventable) explosion in West, and certainly no Ted Nugent riding sidecar as a co-ambassador. Bet you Perry will be wearing those dark-framed eyeglasses that magically transform him (he thinks) into a bookish authority figure –– no pair of specs has carried so much p.r. burden since one caped crusader donned Foster Grants to hide in plain sight as Clark Kent.

No, I trust that Perry will be the soul of respectability on his job-poaching jaunt up north because he’s not running for governor again, but he’s almost certain to make a bid for the 2016 Republican presidential nom. Perry has a lengthy and well-established record of mixing private capitalism and public governance, but in this case, he wouldn’t be the first state officeholder to use taxpayer money to help indirectly support national political ambitions. (Rumor has it that liberal Democrats have done this, too.) But he does have extra incentive not to go hee-hawing about shooting coyotes and blocking gays from marrying among the New York business crowd: After his disastrous 2012 presidential campaign painted him as a bit of a pampered redneck, he needs to expand his appeal in Republican circles outside the giant Texas bubble. He needs to look presentable, and therefore fundable, to rich citified conservatives who’re smarter and less far right re: social issues than he is.

Of course, Perry’s previous trips to New York and California yielded not a single high-profile business transplant to this neck ‘o the woods. But this time he’s after bigger game –– personal respectability among skeptical, grownup Republican donors. Those eyeglasses have a tall mountain to climb this time around.