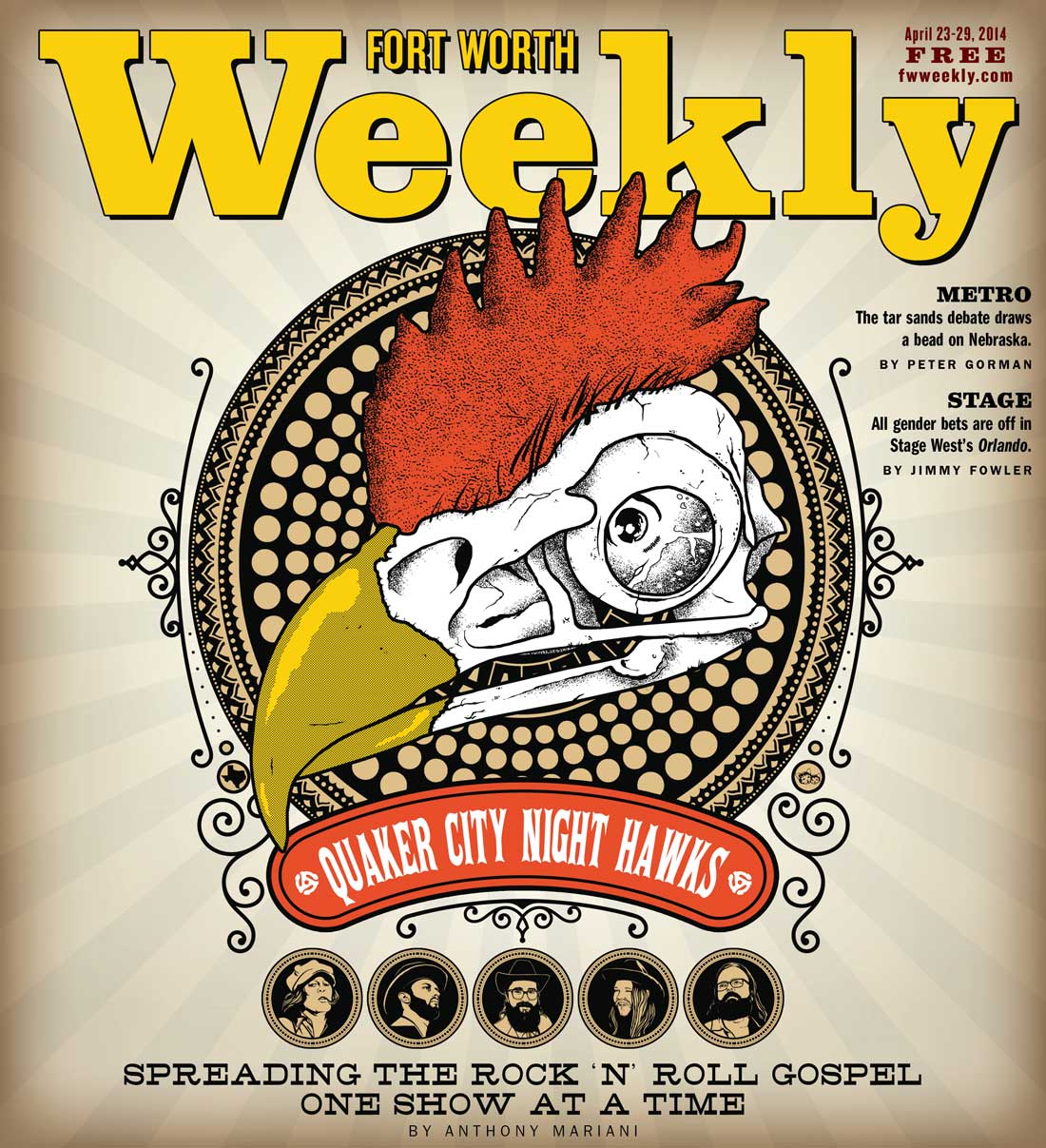 It was getting pretty rowdy. On a random Monday night in the middle of last winter at Lola’s Saloon, psychedelic Fort Worth rockers Secret Ghost Champion had just finished a loud, moody set and were removing their equipment from the stage, making room for the next band. To fill the dead air, a DJ began spinning an effervescent mix of sweet ’80s/early-’90s pop and R&B. A few people near the front of the stage started dancing. Other folks were doing shots, slamming beers — in general, having a blast. The pop and R&B rolled on for a good 10 minutes before the house lights began to dim. The music stopped, and everyone looked up to see three shadowy figures standing onstage with guitars.

As concertgoers began oozing forward, the warm, bubbly tones of an organ at low volume burned through the air. The crowd, which only a few minutes ago was riotous, quieted. The guys onstage began to sing, a series of mournful ooo’s in three-part harmony. The crowd froze, transfixed. And then one of the performers lifted his voice — gravelly, soulful, and powerful — above the rest: “Hey, now / Sons and daughters / You got to heeear me,” with his bandmates joining him on those last two words, and again, “Heeear me.” In a matter of seconds, Quaker City Night Hawks had transformed one of the most wheels-off venues in Texas into something like a gospel church.

Not many bands either local or national but especially local and especially in a local venue can do that, can stun an audience via sheer musicality. Not bombast. Not flash. Just music. And while the Night Hawks — the original quartet of co-frontmen Sam Anderson and David Matsler, bassist/backing vocalist Patrick Adams, and drummer/backing vocalist Matt Mabe, plus newcomer Andrew Skates on keys — are beloved in North Texas, they didn’t just appear on the scene fully formed. They got where they are now — about to release their fifth recording but their first nationally distributed one — by spending countless hours playing together, most of the time in front of paying customers.

For the first few years after forming in the late ’00s, Quaker City Night Hawks probably spent more hours onstage than at home.

“You start hearing people say, ‘You’re over-saturating the market,’ ” Anderson said over beers with his bandmates one night recently at Magnolia Motor Lounge, the band’s de facto headquarters. “You immediately don’t want to listen to that person, because he just used two flagged words in one sentence. I understand if you’re at the level of The Black Keys or something. They’re not going to play Fort Worth four nights a week, but all we were trying to do is get the songs down, and we genuinely enjoy playing shows. It’s one of the things we most look forward to, and we played as often as we could.”

The players most responsible for starting the Night Hawks are Anderson and Matsler, the band’s chief songwriters and lyricists. The guys met through a mutual friend around 2004 in Lubbock, where Anderson was studying art at Texas Tech University and Matsler was studying mandolin at South Plains Bluegrass College. Anderson remembered his first visit to Matsler’s Lubbock abode: “It was this cinder-block house. He had a card table with a pizza the size of the card table on the card table and a bunch of weird instruments. I didn’t know what they were, but I was like, ‘This could be pretty cool.’ ”

After Lubbock, the two went their separate ways, Matsler down to Austin and Anderson to Keller, but only for a little bit. Around the time Anderson had to look for a new roommate, Matsler was leaving Austin. Welcome to Keller, David Matsler.

Though the two musicians weren’t writing together, they were playing together. A lot. “That was probably the richest [financially] we ever were,” Anderson joked.

One of their many regular paying gigs was in Watagua at the now-gone Crow Creek Tavern, where Adams was a regular. After learning Adams was a musician, Anderson asked him to play bass in his band, his first professional project, Sam Anderson & The Thrift Store Troubadours.

“I played a lot of bass in high school for friends’ bands out of necessity,” Adams said. “Everyone wants to play guitar.”

Adams, who was focused on playing trumpet, was coming out of one project, the ’60s-pop throwback outfit Handclaps and Harmonies, and was about to enter another, the Ennio Morricone-esque Whiskey Folk (née Whiskey Folk Ramblers). He said he was pretty much on cruise control. “I was doing nothing with my life,” he recalled, “living on my dad’s dime … . I was doing anything that would pay me money short of blow jobs.”

Through no known calculation, the three wandering souls relocated to Fort Worth around the same time in 2008. “We were spending all our time down here anyway, and it’s a lot easier to drunk drive three blocks than it was 30 miles or whatever we were doing back then,” Adams joked.

The trio spent many hours on West Berry Street near the campus of Texas Christian University. Mabe, who was in two bands, the hard-charging Jefferson Colby and Stella Rose, was a drumming/drinking regular at the Berry Street venues The Moon and The Aardvark, where Matsler’s new project, The Black Bonnets, held a Thursday-night residency.

During The Black Bonnets’ run, Moon owner/booker Chris Maunder started a song-swap on Wednesday nights with a handful of select singer-songwriters, including Josh Weathers, Luke Wade, and Anderson and Matsler.

“The response of the crowd in Fort Worth versus what we were experiencing in the Mid-Cities … was different,” Matsler said. In Fort Worth, he went on, “people … would ask you to play originals, which made you feel good, so we hung around for a long time,” which ended up being about a year.

One by one, the other song-swappers “made the good decision to bow out,” Matsler jokingly recalled, leaving just him and Anderson. Writing together was a logical progression.

Anderson, who “very specifically wanted to start a rock ’n’ roll band,” simply approached Mabe one night at The Moon and bought him a shot.

“I was sold on the band name alone,” Mabe recalled.

“Quaker City Night Hawks” takes its inspiration from Mark Twain’s The Innocents Abroad, the legendary author’s 1869 account of a five-and-a-half-month “pleasure excursion” from the States to Europe and the Holy Land in 1867. The only time the Christians and Jews onboard got along, Twain recounted, was when they convened after hours to play cards, drink whiskey, and smoke stogies. The name of their group? The Night Hawks.