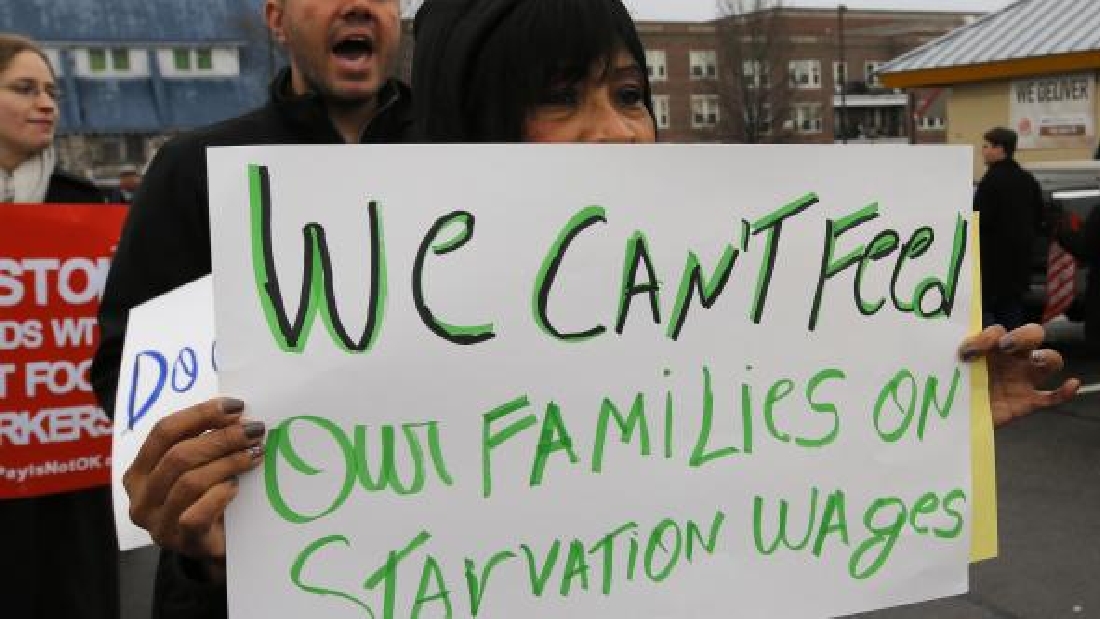 I guess the bullies will always be with us. Nowadays they’re targeting the poor. No surprise there. Bullies always single out those who are weaker, more vulnerable than themselves.

Dr. Annette Bosworth, a first-time candidate for Congress, recently posted a suggestion on  Facebook that the “Please do not feed the animals” signs in parks also be applied to food stamp recipients.

The bullies include members of Congress, the Tea Party, and Speaker of the House John Boehner, who tells us he would commit suicide before raising the minimum wage.

Apparently, the Speaker hasn’t learned that no one can live on $7.25 an hour. Or that, according to the National Low Income Housing Coalition, an average one-bedroom apartment anywhere in the United States is beyond the reach of someone earning minimum wage.

This means there are record numbers of people in poverty and going hungry. In this country, 3.5 million are homeless, 41 percent of them families with children. Many are employed — earning $7.25 an hour.

And yes, many of them rely on food stamps and other assistance. Yet the Tea Party (funded by billionaires) enthusiastically backed cuts to food stamps — $9 billion for openers, followed by $11 billion over three years. Now food pantries are struggling to fill in the gaps of a program that’s already insufficient to afford anyone a healthy diet.

To the bullies, it doesn’t matter that 76 percent of households on food stamps include children, seniors, or disabled people. Many who qualify for the program don’t even apply due to the shame and abuse heaped on those who do. In the land of the free, I suppose, starvation is manly.  It’s patriotic.

The bullies are supported by a lot of good, honest folk who may not be bullies themselves but who get a little jittery at the thought of their neighbors “getting away” with something.

They say things like, “I work hard for my money. Why should I give any to bums who don’t want to work?”

As there are now three people for every job, average income has stagnated, and CEO pay is 300 to 400 times that of the average worker, maybe it’s not unusual to see decent people turning stingy, nervously guarding what they have, or fighting over the scraps.

Perhaps they should direct their anger at the bullies, like McDonald’s and Wal-Mart, piling up billions in profits while fighting tooth and claw against raising wages to something their workers can live on. Former labor secretary Robert Reich tells us that had the minimum wage simply kept up with inflation, it would now be more than $10 an hour.

So people who attack the poor are not looking at reality.

Here’s a little reality: The Congressional Budget Office predicts the effects of the 2008 housing collapse will run long into the future and cost upward of $25 trillion or $80,000 for each person in the country.

So far, not one of the Wall Street crooks who brought us this horror show — the biggest shakedown in history — has spent a day in jail, nor has one red cent of the money they stole been returned to the people whose lives they ruined. Instead, they were bailed out with taxpayer money.

This was welfare to rival the wonders of the world, yet there’s more gnashing of teeth over the pittance dribbled out to the unemployed and underpaid who are struggling to get by.

And the elites are still raking in the profits.  Since 2009 the top 1 percent has captured about 95 percent of the income gains. The top 10 percent took more than half the country’s total income.

But bullies prefer easy targets. And the elites are happy to deflect attention away from themselves.

In a so-called Christian country, the image of people attacking and berating the least of us is not a pretty one. The Golden Rule, some version of which is found in most religions, is the basis of empathy, echoed by the admonition, “That which you do to the least of these, you do to me.”

And who are the “least of these”? Not the banks, not the CEOs, nor the billionaire owners of Wal-Mart or Apple or Monsanto. It’s not Wall Street, and it’s not the military (which now gets 60 cents of each of your tax dollars).

“The least of these” are the hungry, the impoverished, the sick, the homeless, and those in prison. For my part, I’ve never had much use for any religion that has abandoned that principle.

Don’t think much of bullies, either.

Fort Worth artist and writer Grayson Harper can be reached at poetreb49@gmail.com.