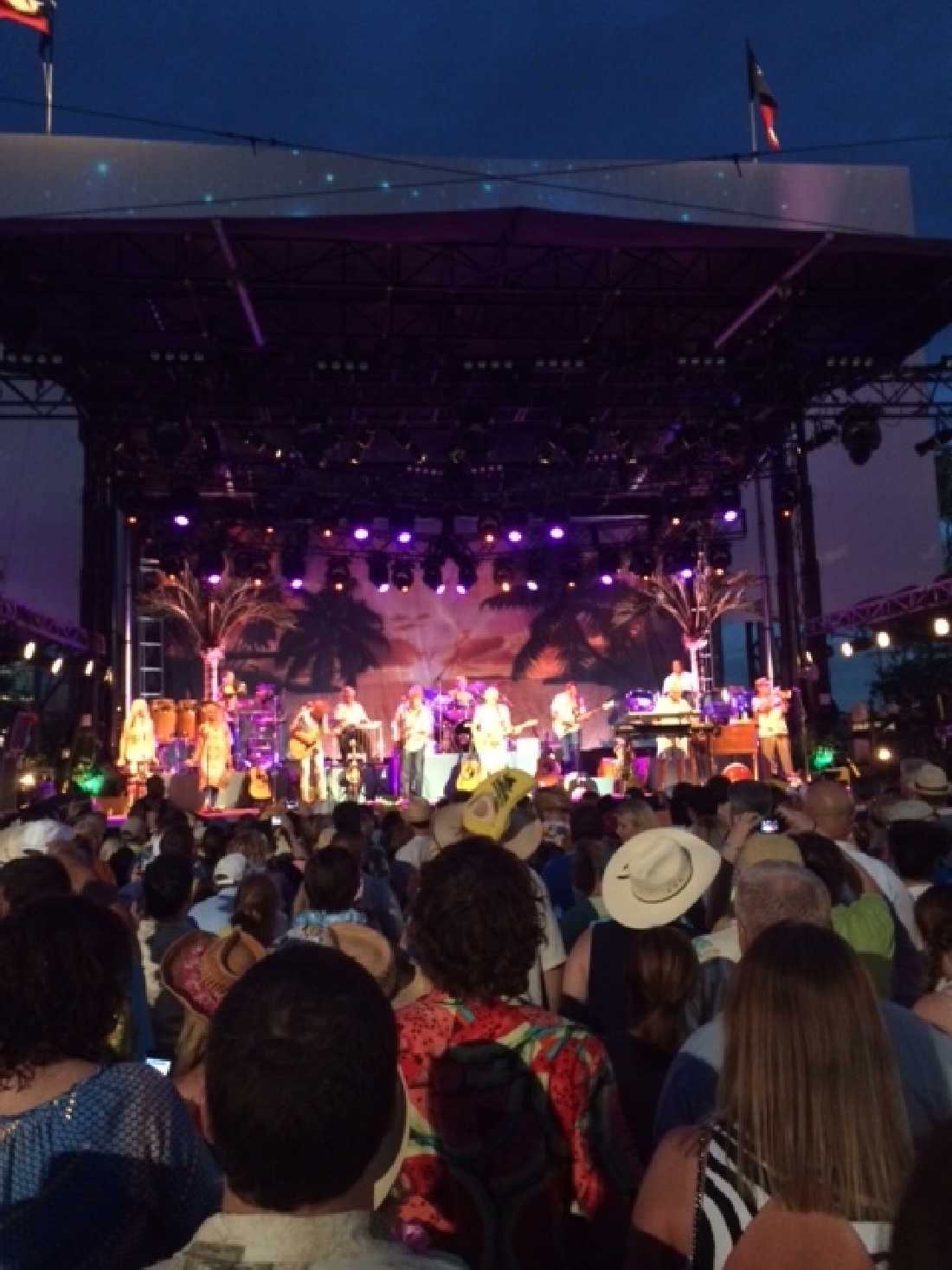 If I had to pick the funniest thing I saw at the Jimmy Buffett concert at Coyote Drive-In last Thursday, I’d say nothing beat the retired dad in a business casual Hawaiian shirt hurrying away from the bar with a bottle of wine in each hand. He appeared to be chasing after his wife, who, evidently, was in an even bigger hurry. After their dust cleared, I saw another retired dad in a far crazier Hawaiian shirt holding a margarita in a yard-long container aloft as if it were a Ming vase rather than a long, neon, plastic tube full of frozen good times. He was pretty funny, too. Honestly, I don’t even know if I could pick a favorite moment or character. Besides the fact that most of the concertgoers populating the Coyote’s cantina were sporting yellow Landshark Beer-branded foam fins on their heads, there was also the cowboy riding a horse with a lei around its neck and the drunk chick who whiffed on a high-five with me and swatted my phone onto the gravel as if she were a petite, white version of Dikembe Mutombo in a bikini top and grass skirt instead of a Nuggets uniform.

LOL for cracked screens, right? But, anyway, I got my fill of parrothead-watching at the cantina, a spacious, covered lot floored in gravel and apportioned with outdoor cocktail seating, at the end of which is a stage. Before the big show, an acoustic duo warmed up the crowd, from which a handful of couples emerged to dance to hoary chestnuts like “Wagon Wheel,” “I’m a Believer,” and “Brown-Eyed Girl.” As it happened, their rendition of that last tune was the first of three versions of the song to air on this night, the second being an instrumental calypso version pumped out of the stage’s mains before Jimmy took the stage and the third being Jimmy’s opening song.

I hate that song, but I laughed anyway and got in line for food. The Drive-In serves what seems to be the kind of semi-upscale fare (I think I read “cotija cheese” on a couple of items’ descriptions) of the type — and, unfortunately, the price tag — that you’d find at a major league ballpark. This being a sold-out show and all, there was a huge crowd of mostly middle-aged dads waiting for orders, and whatever the fulfillment scheme was, it was pretty inadequate. The orders were taking forever to come out. I didn’t care so much, and, in fact, I lost my receipt and any hope of getting my order, so I got back in the beer line. But if there’s one thing that hacks off a middle-aged dad trying to have fun, it’s an inadequate order-fulfillment scheme.

One such dad, Oakleys on his face, foam fin on his head, started to shout out the order numbers thinking it would somehow make his burger happen faster. His wife told him to cool it, and cool it he did, though he was vocally amazed every time anyone walked away from the counter with food. By the grace of a Coyote Drive-In staff member, I got a duplicate receipt and got back in line. My number: 6087. But the employee at the register microphone was calling out 8000s. Just as I was about to give up, she called out 6098, renewing my hope. Alas, hope petered out after another 15 minutes, and I left the line again, getting in a different one to order a pretzel or chips or a hot dog bun, anything really –– I was already three tall boys deep and needed some grub. A pro tip for attending the next huge, sold-out simulcast concert at the Coyote: If you order food, stick to stuff that’s visible behind the counter, because you’ll probably get it way faster. I ended up cramming a pizza.

While my food experience wasn’t fantastic, the bar service was on point. The staffers there were fast, and the lines moved quickly. Moreover, there was a good amount of craft beer on draft and in cans. I was stoked to see cans of Grapevine Craft Brewery’s Lakefire Pale Ale, and the prices weren’t completely outrageous: $7 for a 16-ounce Landshark isn’t a steal at all, but I didn’t feel gouged either. I suspect that if you’re just there to watch a movie, the food situation is a lot more manageable. I definitely plan on grabbing dinner and watching a flick there before the summer is over. –– Steve Steward