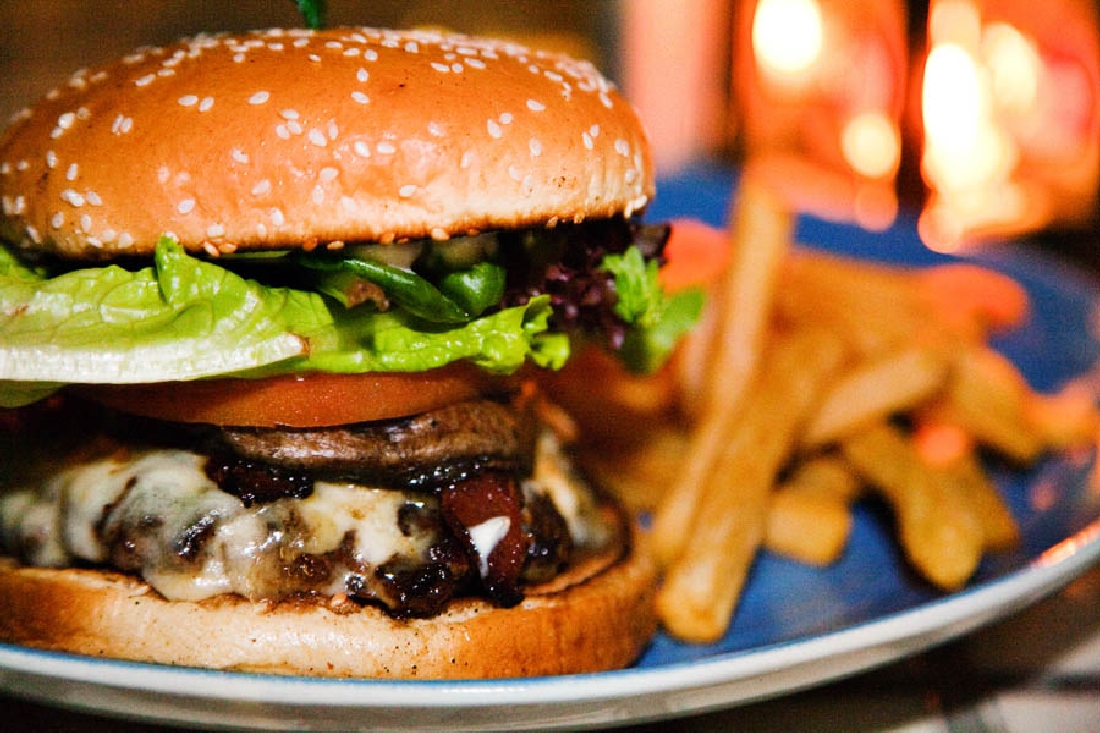 Growing up, I used up more than a few crayons on those coloring pages that restaurants hand out to keep kids quiet. The one that hung on the Chow, Family fridge the longest was of something called Burger Town, showing a lush kingdom of condiments streams, clouds made of sesame seed buns, lettuce trees, and beef patties as far as the eye could see. I bet Burger King’s marketing people never thought their cartoon fantasy would be used by the West 7th developers as a model for an urban village.

According to a study I made up, the West 7th Street corridor has more burger joints per square foot than any other area in the country. This cried out for more research. Donning a paper crown, I grabbed my crayons and headed for meat-and-cheese alley.

Brewsters is a chic little sports bar that serves a more elevated version of classic Americana cuisine. Bottle Cap Alley, on the other hand, is kind of a DIY counter-service joint in the mold of Kincaid’s –– but with way more menu choices. Generally speaking the burgers at both places were good, but neither reinvented the burger wheel.

Maybe the thing that stands out most about Brewsters is its devotion to beer and televisions. It has about a quarter million beers on tap in the smallish, swanky bar/dining room and a dozen or so televisions scattered strategically around the place. Our polite and efficient server reacted in mock confusion when my guest and I didn’t order a beer with our lunch.

The menu includes some interesting-looking variations on the burger. Our server lobbied hard for us to order the peanut butter burger ($8.49), with candied corn and peanut butter –– no, really. Call me a prude, but I found the very idea of peanut butter slathered on a burger blasphemous. I opted instead for the far more pedestrian Torch Burger ($7.49), smothered in a jalapeño jam that could have used more kick. The burger didn’t lack for juiciness, though, and the pepper jack cheese added a welcome tang. The best part of my lunch was the gooey parmesan cheese fries that begged to be chased by a frosty adult beverage. I’ll have to go again when I’m not expected back in the office sober.

The first thing I saw upon entering Bottle Cap Alley was what looked like a stack of job applications; they turned out to be burger ordering forms. Customers check the add-ons they want (pencils provided), then hand in the forms at the counter. This kind of stressed me out. If I wanted to spend my time writing down burger details, I’d have kept my job waiting tables.

After tearing up my first draft, on which I loaded my burger with about 17 things, I opted for a more straightforward burger with cheddar, bacon, lettuce, pickles, tomatoes, and jalapeños. The beef was well seasoned and the ingredients fresh. It’s not the kind of burger that will drop you to your knees in ecstasy, but it was well above average. I just don’t know if it stands out enough to survive the competitive burger zone.

Will either of these places knock Fred’s Texas Café or Rodeo Goat off of their thrones? I don’t think so. But Bottle Cap and Brewsters might be able to share a niche. There are a million burgers in Burger Town. These are just a few of them.