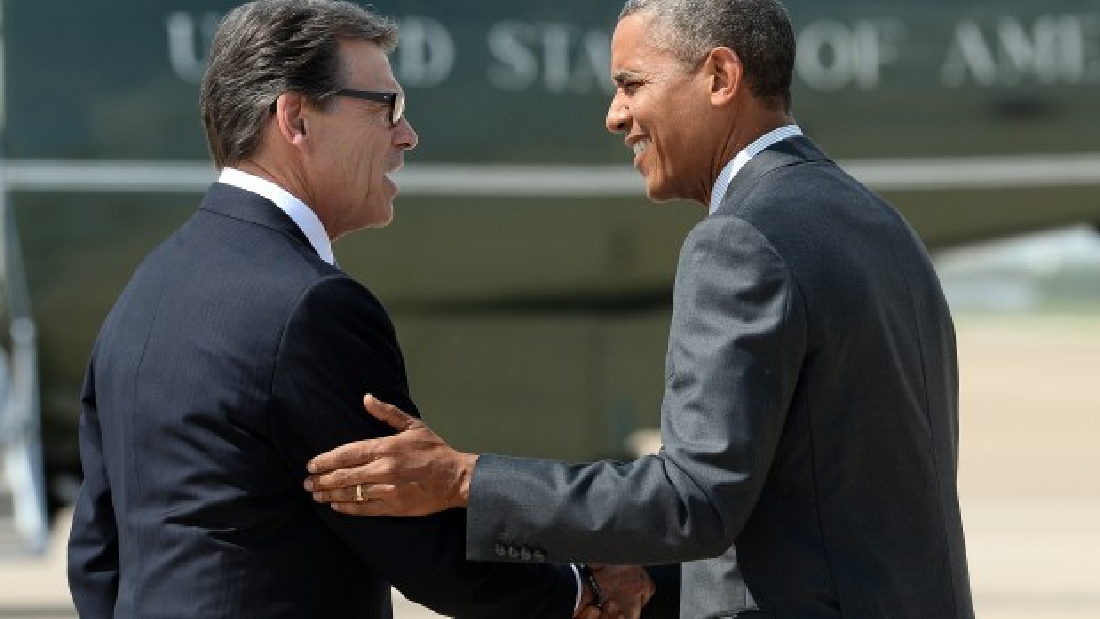 Gov. Rick Perry, apparently making another run for the GOP presidential nomination, pointedly turned down the idea of welcoming the current president in Austin with a “quick handshake on the tarmac.”

Instead he asked for a face-to-face meeting. His purpose, besides seeking national media attention, was to urge Obama to do more to cope with the huge influx of Central American kids flooding across Mexico into Texas.

Fine, said Obama, who had asked Congress to appropriate $3.7 billion for that purpose. He invited Perry to a round-table discussion with faith leaders and Dallas local and federal officials and to join him on the presidential chopper from Dallas/Fort Worth International Airport to Love Field.

Then he basically put the border issue back in Perry’s lap.

Perry earlier had accused Obama of not caring about the flood of young undocumented immigrants.

“I don’t believe he particularly cares whether or not the border of the United States is secure,” Perry had said on the ABC TV talk show This Week the previous Sunday. “And that’s the reason there’s been this lack of effort.”

In June, Perry accused Obama of actually encouraging the Central American children to illegally enter Texas. “We either have an incredibly inept administration, or they’re in on this somehow or another,” Perry told Fox News host Sean Hannity. “I hate to be conspiratorial, but I mean, how do you move that many people from Central America across Mexico and then into the United States without there being a fairly coordinated effort?”

Obama had turned down suggestions from Republican politicians like Perry and also from Democrats, including gubernatorial nominee Wendy Davis, that he go see the human flood firsthand.

U.S. Rep. Pete Gallego of Alpine said a presidential visit would “divert … law enforcement and other resources at a critical time.”

“There’s nothing that is taking place down there that I am not intimately aware of and briefed on,” Obama told reporters in Dallas after his meeting on July 9. “I’m not interested in photo ops; I’m interested in solving a problem.

“And those who say I should visit the border, when you ask them what should we be doing, they’re giving us suggestions that are embodied in legislation that I’ve already sent to Congress,” he added.

Obama said he and Perry seemed to be on the same page on most border issues.

“The bottom line is, actually, that there’s nothing that the governor indicated he’d like to see that I have a philosophical objection to,” the president said. “The challenge is, is Congress prepared to act to put the resources in place to get this done.”

“And we can have more Border Patrol agents on the border, as the governor has requested,” Obama said. “We can shorten the timetables for processing these children or adults with children, as the governor thinks is important.

“We can make sure that some of the public health issues … are addressed,” Obama said, “so that we’ve got enough folks vaccinating and checking on the health status of these children to make sure that not only are they safe, but also our communities are safe.”

He might even send National Guard troops to the border, especially if that’s what it takes to get the Texas congressional delegation to approve the funds.

“As far as I could tell,” Obama said, “the only disagreement I had with Gov. Perry is that he wanted me to go ahead and do it without Congress having to do anything.”

“In other words, Governor, you don’t particularly support the bill, and you’re not encouraging your delegation to pass this,” Hume said. “Is that a fair assessment?”

“I think you have distilled the correct answer,” Perry replied.

Veteran political reporter Dave McNeely can be reached at davemcneely111@gmail.com.