On the surface of a barren, hostile, alien planet, an Earthman named Peter Quill (Chris Pratt) boogies leisurely across the rocky terrain in his spacesuit, singing along to Redbone’s “Come and Get Your Love.” When a small carnivorous lizard attacks him, he grabs the creature and sings passionately into its head like it’s a microphone. This little scene near the beginning of Guardians of the Galaxy tells you that this isn’t going to be like the other Marvel Comics movies. Some of the other entries in this series haven’t been short on humor, but this is the first one where the humor is pretty much the whole point of the science-fiction extravaganza. It proves to be a nice change.

Peter is a common intergalactic thief who calls himself “Star-Lord,” but he’s such a loser that everyone finds this nickname cute. When he steals a mysterious metalwork orb off the aforementioned planet, he finds himself at the center of a nefarious plot by the blue-skinned overlord Ronan the Accuser (Lee Pace), who wants to use the orb to do bad things to the universe. It’s up to Peter and a ragtag bunch of outlaws motivated by petty greed or revenge to foil Ronan’s evil plan.

The five characters at the center form a neat comedy team, which is all the more impressive given that two of them are computer-generated. Zoë Saldana and former WWE wrestler Dave Bautista make terrific literal-minded straight men for the wisecracks, while a genetically modified talking raccoon named Rocket (voiced by Bradley Cooper, channeling Dustin Hoffman in Midnight Cowboy) steals a bunch of scenes with his snarling, eternally angry attitude. At the center is a well-cast Pratt, a burly guy who can play athletes (Moneyball) and Navy SEALs (Zero Dark Thirty) but can also be terribly funny in Everydude roles (The Lego Movie, TV’s Parks and Recreation). This movie gives him the chance to do both at once, and he makes a perfectly unheroic hero.

The soundtrack is festooned with splendidly cheesy 1970s and ’80s rock anthems (“Hooked on a Feeling,” “Fooled Around and Fell in Love”), reflecting Peter’s musical tastes that have been frozen since his abduction from Earth in 1988. He also makes great use of “O-o-h Child” during his climactic showdown with Ronan. The music even works during the movie’s superb, atypically somber opening sequence, when young Peter (Wyatt Oleff) sits in a hospital corridor and listens to “I’m Not in Love” on his Walkman rather than go into the room where his mother lies dying.

While Marvel newcomers like me might have some trouble keeping all the different alien races and agendas straight, we might well be too busy laughing to care. Even the funniest of the previous Marvel films (The Avengers and the Iron Man movies) maintained a godlike reverence toward their superheroes. Director/co-writer James Gunn throws a pie in the face of all that, and we haven’t seen a science-fiction blockbuster balance satire and earnestness this delicately since Men in Black 16 years ago. His refreshingly snarky attitude makes Guardians of the Galaxy into the summer’s most enjoyable Hollywood movie.

Guardians of the Galaxy 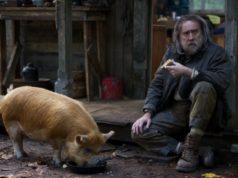 Pig in the City