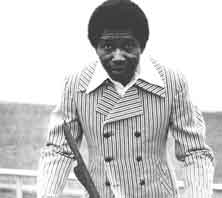 1.) I’m not saying Fred’s Texas Café (915 Currie St., 817-332-0083) is small, just that the West 7th beer-and-burger institution might not be big enough to contain all of the gigantic gospel-psych-funk fury that living legends Bobby Patterson and The Relatives will deliver on Friday.

Both Dallas-based acts have recently become hot retro commodities, bolstered by new recordings: Patterson’s I Got More Soul! from late July and The Relatives’ The Electric Word from February 2013.

The 70-year-old Patterson’s career began in the mid 1960s both onstage and off-. In addition to writing and performing, he also worked as a producer, songwriter, DJ, and label rep. Recorded in Austin with producer/guitarist Zach Ernst, currently of The Relatives and formerly of Black Joe Lewis & The Honeybears, the album –– a mix of originals and select covers –– represents Patterson’s return to music after “a long sabbatical,” according to a recent story in The Dallas Observer. If Patterson has ever performed in Fort Worth, it was probably at a place with pews and an altar.

Same goes for The Relatives. Formed around the West brothers, The Rev. Gean and Tommie, the hybrid gospel group broke up 33 years ago, according to a profile in The New York Times, and got back together after Noel Waggener, the founder/owner of the archival record label Heavy Light, heard an early-’70s Relatives 45 salvaged by a friend’s mother at a thrift store. With another friend, his partner Charisse Kelly, Waggener tracked down Gean, who was presiding over a “ramshackle church,” the Times writes, in Dallas. Gean led Waggener and Kelly to Dallas’ Phil York, who was sitting on five unreleased Relatives tracks that he produced in 1975. Heavy Light reissued them as the album Don’t Let Me Fall in 2009, which inspired Gean and Tommie to get some of the band back together –– only three of the original seven members were healthy enough to perform –– and begin touring.

After lighting up stages across the country, including at Austin City Limits and Bonaroo, The Relatives were coaxed into the studio by producer and Spoon drummer Jim Eno, who had caught them at an Austin gig. With backing by three young Austin rockers, including Patterson producer Ernst, The Relatives released The Electric Word on major indie label Yep Roc Records. London’s Guardian said the album is a “welcome time warp.”

What makes this Fred’s gig even juicier is that it is –– wait for it –– free. Hallelujah indeed.

Cover is $10. Proceeds benefit The WARM Place, a Fort Worth grief support center for children.

3.) It’s free week at Denton’s Rubber Gloves Rehearsal Studios (411 E. Sycamore St., 940-387-7781), and the show tonight (Wednesday) just might be the best of the bunch. Two Denton noise outfits, Problem Dogg and Power Objects, will open for Fort Worth’s Clear Acid, a hardcore, heavy and doom-laden post-rock outfit whose lone recording, the live EP Sludgymo, is as powerful, tightly focused, and balefully entrancing as anything Mogwai or Godspeed You! Black Emperor have ever done. And twice as loud.

4.) Ultravox was easily one of the best baroque-pop bands of the ’80s, but suave Scottish frontman Midge Ure and company were simply too damn dark to cross over into the American mainstream and take hold –– though not for lack of trying on MTV’s part. Nary an hour went by when the network didn’t air an Ultravox vid. Or two. But what commercial radio here got wrong, MTV got right. “Dancing with Tears in My Eyes,” “Reap the Wild Wind,” and, most especially, “Vienna” are brilliant.