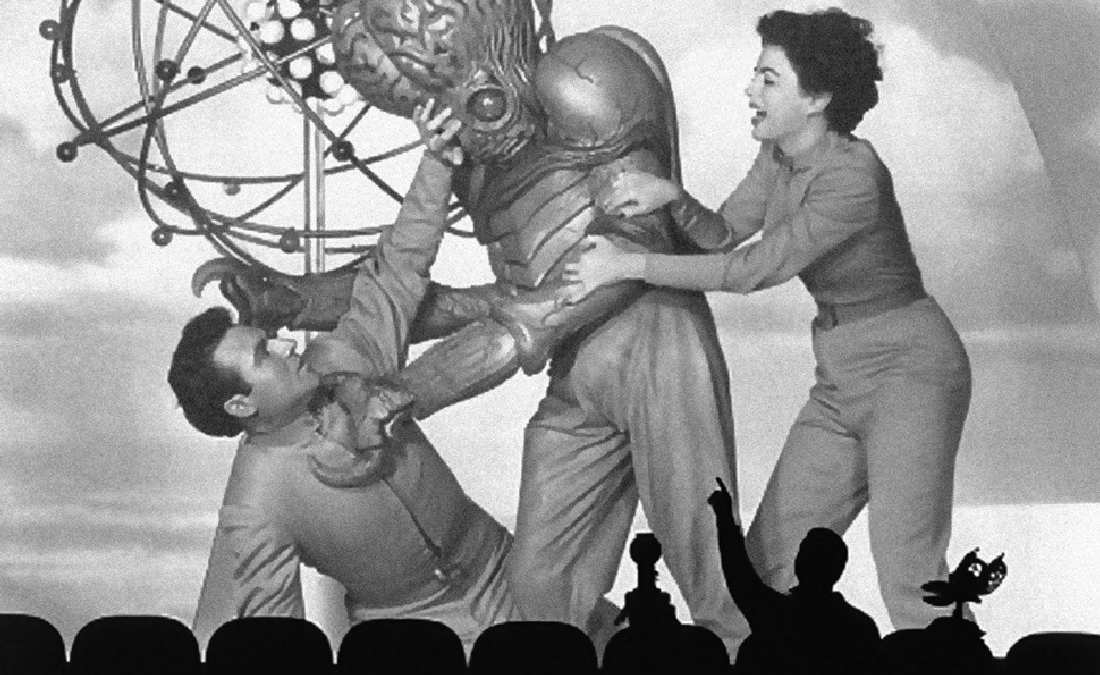 When Mystery Science Theater 3000 debuted in 1988, did anyone mention that the show owed a huge debt to The Muppets? Because when I was a kid, every time I saw the silhouette of Joel Hodgson and his pair of wiseass robot sidekicks cracking jokes at the B-movie garbage flickering in front of them, I kinda wondered if the show could be improved by a visit from Statler and Waldorf, the two old Muppets who spouted haw-haw zingers from the theater’s upper balcony. In any case, from The Muppet Show to Beavis and Butthead — and even Tosh.0 (if watched in moderation) — I am a fan of the concept of irascible chuckleheads watching dreck and making jokes. And for a year or maybe longer, Fort Worth has had its own version of this trope. On the last Wednesday of every month at The Grotto, Wondercrust Movie Watchers Club commandeers the front half of the club and screens something hilariously terrible.

An outgrowth of the Shut Up and Prance comedy collective, Wondercrust is a cadre of aspiring writers who raid the darkest depths of the VHS era for its worst trash, watch said trash, and script jokes for the monthly Grotto screenings. The running commentary, though scripted, is read live, allowing for plenty of improvisation — it doesn’t sound as if the comedians are merely reading, in other words. Along with the ADD nature of on-the-fly shit-talking, they edit the flicks to include various other sight gags, giving the entire production a gleefully hyperactive pace. If there’s an upper limit to how many times you can Rickroll an audience before they revolt, Wondercrust has yet to find it, though not for lack of trying.

Wondercrust’s August selection was the 1986 U.K. horror stinkbomb Rawhead Rex. I normally work Wednesdays, so this was my first time at a show, and I didn’t know quite what to expect. I definitely did not expect a packed house, but packed it was, presumably by fans who come out to these things every month. I sat near the front door at the bar, and the general consensus I overheard from those trickling in — most of them anticipating nothing more than regular mid-week drinking — was surprise at how crowded the room felt. I expected these latecomers to go elsewhere, but they found seats and hung around until intermission.

Because Wondercrust takes place at a bar, they allow a leisurely break for people to load up on drinks. I wouldn’t say that being drunk is necessary for enjoying Wondercrust, because I started out sober and found plenty to laugh about. Of course, since I’d posted up at the bar, I didn’t really have to wait until the break to get beers, so the jokes got funnier a little bit faster.

Admittedly, I didn’t walk away with my sides split open, but I guffawed enough to want to watch another Wondercrust production. Maybe some films lend themselves to better jokes, but the crowd ate it up either way. My only gripe was that making fun of stuff like Slumber Party Massacre is a little bit like shooting fish in a barrel. I think it would be a lot funnier to tip over more sacred cows, though sitting through The English Patient is a huge, interminable drag that I wouldn’t wish on anyone, even if you could resurrect Richard Pryor to write the jokes.

No matter the movie, it’s refreshing to have another entertainment option in a bar beyond the usual drink specials and local bands, though after Wondercrust’s credits roll, a band usually takes the stage to finish out the night. September’s last Wednesday is on the 24th, so mark your calendar accordingly — Wondercrust is taking out the trash. — Steve Steward