Sometime back in the early 1990s I stumbled across Last Night at the Alamo (1983), an obscure black-and-white film directed by the tortured Texas maverick Eagle Pennell. For years I’d pull the VHS tape out at perfect times and give screenings to friends. Nobody had ever seen it. Most of my friends liked it, a few loved it, a few hated it.

The movie is funny, dark, depressing, and uplifting all at once, one of quirkiest and best indie flicks ever made in Texas.

The film festival crowd loved it. The New York Times called it “charmingly effective in its own crude, slapdash manner.” But the movie wasn’t marketed or distributed well and few saw it. 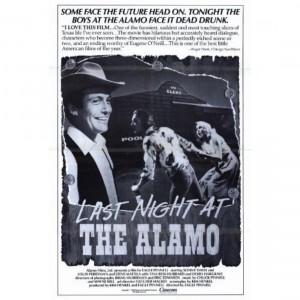 Some years back I asked Fort Worth Weekly movie critic Kristian Lin, who’s watched thousands of movies over the years, if he’d seen Last Night at the Alamo. He’d never heard of it.

The movie depicts a handful of Houston barflies lamenting the fact that their favorite hangout, The Alamo, is going to be torn down to make way for new development. One of the main characters is a guy named Cowboy who vows to save the bar but instead gets drunk and makes a fool of himself.

In the past two decades I’ve seen the actor who portrayed Cowboy appear in many movies, usually playing a small part with few speaking lines. He was in Thelma & Louise (1991) and appeared in two Willie Nelson movies, Red Headed Stranger (1986) and A Pair of Aces (1990).

“Hey, there’s Cowboy,” I’d think whenever his face would suddenly pop up in a movie.

I never knew the actor’s name, he was just Cowboy to me.

Getting to meet Davis all these years later was a kick. He’s 30 years older than he was when he portrayed Cowboy, and he looks older. But he’s still got that gusto and twinkle in his eye that jumps off the screen. When he smiles, especially, you can see ol’ Cowboy.

Davis has appeared in movie classics such as Lonesome Dove (1989) and Fast Times at Ridgemont High (1982). He’s also appeared in low-low-budget crapfests. He enjoys them all.

“I rarely turn down work,” he said.

He’s made a career playing “big roles in small movies, and small roles in big movies,” he said.

After Alamo, he moved to Los Angeles for 30 years. He found lucrative gigs doing TV commercials, but returned to Texas frequently to appear in movies. He finally moved back to Austin with his wife in 2007. Since then he’s appeared in a dozen films, including Bernie (2011) featuring Jack Black and Matthew McConaughey.

“I’m the go-to Paw Paw,” he said. “If they need an old man in the show, they say Sonny will do it. Big budget productions pay more and there’s a lot more bells and whistles, but there’s nothing like getting down with a small cast and crew and knocking out a good story like Windsor,” he said.

An actor’s livelihood relies on getting frequent calls to work, and Davis has made an art of doing what it takes to keep those calls coming. He says filmmaking boils down to problem solving, and if you’re not a problem, if you know your lines, show up sober, and you’re friendly and enjoyable to be around, you’ll find work.

“I’ve been what I call a bit player, supporting cast, for many years,” he said. “In that role, you have to have your stuff together. They’re not going to spend a lot of time on your stuff. It’s about the stars. That’s the way of the world. But if you’re the man at the counter and you don’t have it after one or two takes, you’re in the wrong business.”

“Don’t get me wrong, I’m available for any of those productions,” he said. “But when you’re touching the human condition and how people are relating to one another, that interests me more than anything.”

Of course, if the world’s worst script arrives in his mailbox tomorrow, there’s a good chance he’ll take a role if offered.

“I’ve done a lot of little low budget stuff like Evil Bong and Terrorvision,” he said. “In Evil Bong II, I got captured by the Poontang tribe and got rolled up into a doobie with my little bald head sticking out of this CGI joint.

“I love to act, it’s cheaper than therapy,” he continued. “It brings me great joy to immerse myself (in a role). It’s a different world.”

Willie Nelson is my all-time favorite singer/human, and I asked Davis what it’s like to act in a movie with him.

He compared it to hanging out with Buddha.

“What you see is what you get,” Davis said. “Willie is everybody’s friend. He spends time with you. When you’re with him, you are the most important person in the world. You get the feeling that you matter. It means something to you that it means something to him. It’s love or peace or whatever you want to call it, but it’s a good place to be. He likes to laugh.”

While filming Red Headed Stranger one day, Nelson noticed a worried look on Davis’ face and asked him if something was wrong.

“I said, ‘Last night my wife called and said my paychecks weren’t going through,’ ” Davis recalled. “Willie said, ‘Is there anything I can do?’ I said, ‘Oh no, please don’t worry about.’ He said, ‘Well is it important to you?’ I said, ‘Yeah, my rent check is going to bounce.’ And he said, ‘Well then it’s important to me too.’ ”

Nelson made a phone call and before long $5,000 had been wired to Davis’ bank account.

“That’s indicative of how he treats people,” Davis said. “That’s his heart. He cares.”

Davis and I spent about an hour talking inside a kitchen with a digital recorder rolling. After the interview ended, we stepped outside onto a porch, sat down, and kept talking for another hour. He’s glib and funny, a natural storyteller, and a sweet guy. I’m glad I finally got to meet ‘ol Cowboy.

Funny thing, we had such a great time visiting and swapping stories that I forgot to take his picture even though my camera bag was sitting right there. Duh!

I pulled a couple of photos from Davis’ Facebook page for this blog post; hope you don’t mind Cowboy.