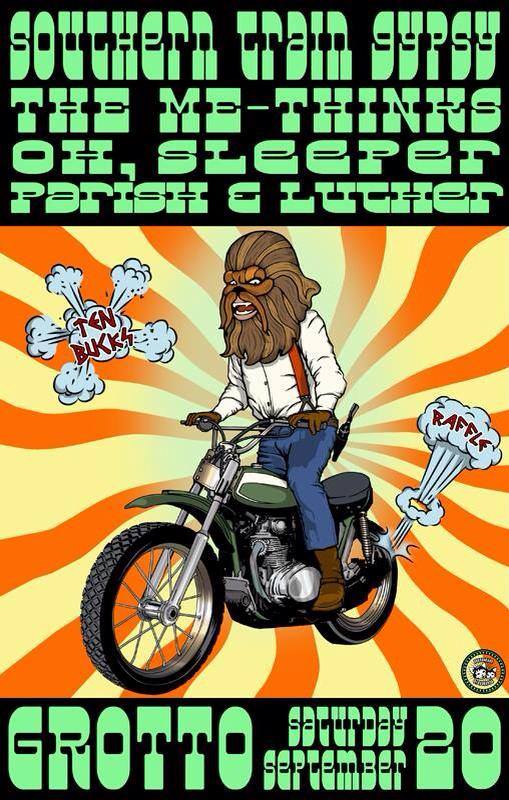 1.) To help raise money for Duane Smith, the Southern Train Gypsy bassist who recently had to relocate to Houston to receive cancer treatment, his band and three other Fort Worth acts –– melodicore stylists Oh Sleeper, self-proclaimed “Fort Worth’s shittiest band” The Me-Thinks (fronted by cancer survivor Ray Liberio), and The Hanna Barbarians’ Blake Parish and Kris Luther –– will perform on Saturday at The Grotto (517 University Dr., 817-882-9331). All proceeds from the $10 cover will go toward Smith’s medical expenses. To donate online, visit his GoFundMe page.

2.) Due to the nature of my job, I admit, I’m much more aware of Fort Worth/Arlington artists than artists from Dallas and Denton, but I read Central Track and the Observer with some regularity, and I also copyedit our nearly comprehensive regional concert calendar every week. What I’m saying is that while I might not have heard of every Dallas/Denton band in existence, I’ve heard of most of them, which is why most of the artists slated to play Oaktopia create in me a feeling of –– how you say? –– being slackjaw. Most of the names nullify my sense of instant artist-recall. And I’ve checked: Most of these nonentities on Planet Anthony hail from North Texas.

Of course, under-the-radar bands are not only welcome. They’re vital. And while there will be a lot of them at this “art/music/culture” festival at several venues in Denton this Friday and Saturday, there also will be a lot of heavy hittin’ underground acts, most from Dallas and Denton but a few from out of town.

3.) Oh, nearly 20 years ago, when I was just an aspiring hack, eons in talent removed from the professional hack that I have become, I wrote for some national magazine what could charitably be called a laborious screed about DJ Shadow’s debut album, 1996’s Endtroducing …. I excoriated the California turntablist and, presumably (though I, lousily, never say), all of his peers in occasionally glitchwerk-inspired trip-hop for going out of their way to confound listeners, ostensibly instead of taking a page from Rakim and endeavoring to “move the crowd” or from the Book of Ellington and trying to swing. I re-listened to the album recently and two other, similar long-players from the era, Lionrock’s An Instinct for Detection and DJ Spooky’s Songs of a Dead Dreamer, and while I don’t think they’re as boring as I originally felt, I still can’t bring myself to recommend them as anything other than background music. Case in point: I listened to Entroducing … while hacking up this space. Now that’s something I can’t do with most rock, jazz, or rap. Classical? Yes, but maybe I’m just never in the right frame of mind for trip-hop or classical, the right from of mind beiiiiing … ?

Shadow’s most recent album, 2011 The Less You Know, the Better, is in the same spirit of Endtroducing …, meaning that it’s mostly instrumental hip-hop, but it’s much louder, faster, and brighter, much less evocative, groove-oriented, and atmospheric. Endtroducing …was the soundtrack to riding the subway or strolling aimlessly around New York City alone on a Tuesday in the dead of night. The Less You Know is an all-night rave with dozens of sweaty, dancing bodies closing in on you.

4.) OK, the name of the location is Shipping & Receiving (201 S. Calhoun St., 817-343-6393). The name of the event on Saturday –– yes, sometimes even non-festivals have names because why not –– is Velvet Purr. The name of the presenter is Sparkle Tunnel. The name of the business that will erect a pop-up shop is Dreamy Life Records & Music + Itsee Trading Co. And the names of the performers are Vogue Machine (Denton), Silk Rodeo (Austin), Nathan Brown (Fort Worth), and headliner (and party thrower) Ronnie Heart (also Fort Worth).

The name of your reaction upon seeing Vogue Machine do its dreamy-pop thing, Silk Rodeo cast a trance-inducing spell, Nathan Brown blow your socks off with his ’80s-inpsired aerobics rock, and Heart twist and shout in all of his discofied glory is happy.

5.) Fort Worth Americana singer-songwriter Jacob Furr dealt with the death of his young wife last year the only way he knew how: by spending some time alone on the road writing music. The release of the fruits of his labor, Trails and Traces, will be celebrated with a performance by Furr on Saturday at Magnolia Motor Lounge (3005 Morton St., 817-332-3344).