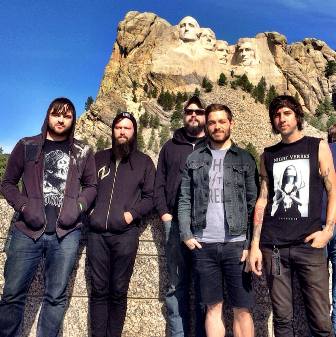 1.) In the world of metalcore, Norma Jean is one of the biggest acts, having played with Disturbed, Avenged Sevenfold, Hatebreed, DragonForce, System of a Down, Lacuna Coil, and more and having been nominated for a Grammy in 2006. The Georgian band formed in 1997 and has only one remaining original member, guitarist Chris Day, but still keeps pumping out product and touring, with a stop tonight (Thursday) at Lola’s Saloon (2736 W. 6th St., 817-877-0666) with tour co-headliners Night Verses and a couple of Dallas locals: the metalcore-esque House Harkonnen and the rowdy duo Mountain of Smoke.

2.) Glad to see Siberian Traps are back. The propulsive, occasionally bombastic alt-Americana Fort Worth band took a hiatus over a year ago after frontman Seth Reeves and his wife had a kid but has been playing with increasing regularity around town. Reeves also said new recorded material is on the way. Not really anytime soon, he said, but sooner rather than later.

When vocalist/drummer Sebastian Grainger and bassist/backing vocalist Jesse F. Keeler released their groundbreaking Vice Recordings debut, You’re a Woman, I’m a Machine, in 2006, they were met with glowing praise across the globe –– and for good reason. The twosome managed to blur all sorts of lines: between punk and glam, metal and blues, even psychedelia and dance. A couple of years after the record came out, Grainger and Keeler broke up, but in 2011 they got back together and, in September, put out their sophomore album, The Physical World.

4.) Friday is the grand opening of River Run Roadhouse (937 Woodward St., 817-420-9166), the newish indie-friendly venue in the building formerly occupied by J&J’s Blues Bar. Along with performances by J. Charles & The Trainrobbers and the gritty, soulful Foxtrot Uniform, there will be a special ceremony for Jim Schusler, who ran the blues bar for decades before throwing in the towel a couple of years ago (and who still owns the building).

5.) From the lava-caked, blood-strewn shores of Frisco comes legendary wailer and noted Satanist King Diamond to House of Blues (2200 N. Lamar St., 214-928-BLUE) tonight (Thursday). The ex-Copenhagener who relocated to North Texas a few years ago recently underwent heart surgery, but that hasn’t stopped him from playing shows. After HOB he’s off to Austin for Fun Fun Fest this weekend.