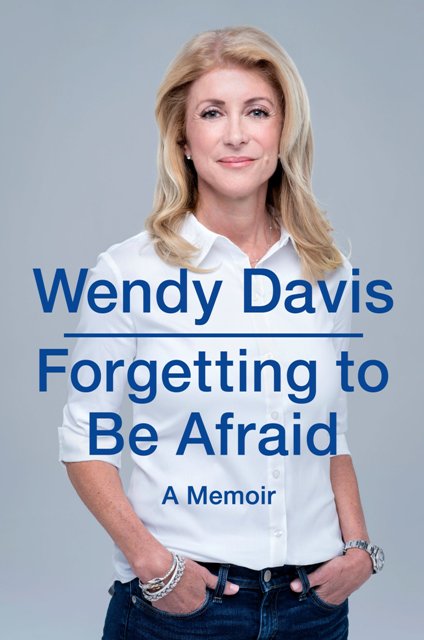 Though once a great hope for the Democratic Party, Wendy Davis may end up being best known as the person who lost to Texas governor-elect Greg Abbott in an election that reflected the national trend of Republican domination and extremely low voter turnout.

From the get-go, her campaign was maligned by accusations from the media and individuals that the Wendy Davis story being fed to the public was inaccurate if not downright misleading. Critics were quick to point out that Davis’ hard-knock narrative glossed over some pesky facts. Indeed, she graduated from Harvard Law School, but she didn’t pay for it herself, as it was implied –– her second ex-husband, Jeff Davis, did. And her first run for office, in 1996, to represent Fort Worth’s 9th District, was not as a Democrat but as a Republican.

Whatever Davis’ political future may be, her penchant for taking on overwhelming odds has been a consistent part of her self-made, bootstrapping narrative. In her new memoir, Forgetting to Be Afraid, Davis attempts to regain control of that narrative by correcting past inconsistencies and giving a surprisingly intimate insight into her personal life.

The book begins with a pastoral reminiscence of her childhood, which was shaped by her family’s incessant moving as her father Gerald “Jerry” Russell chased steady employment. Against that backdrop, she recounts fragmented memories of her grandfather, Nealy Stovall, a tenant farmer who was paralyzed by a massive stroke in his dotage. When she was around 9 years old, Davis began transcribing letters for him. She cites those years as a time when she learned the importance of helping those without a voice.

In the next several chapters Davis paints a vivid and candid picture of her parents, who were largely well-intentioned but far from perfect and unable to provide a steady income. She openly describes the dichotomy that was her father. Charming, charismatic, and philandering, Russell, who died last year, left “several women in his wake,” she writes. Davis reserves some of her deepest sympathy and loftiest writings for her mother, describing her first breakup with Russell as rustling through the community of Muleshoe, Tex., like “wind through the fields my mother once worked.” This was a time when divorce carried an almost insurmountable stigma. After the split her mother Virginia would send letters to Jerry, pleading for him to return. The two would remarry three years later.

Most of her memories of her rough upbringing are trivial, but it bears mentioning that Russell was the founder of Stage West, one of the most popular and successful troupes in North Texas. Stage West also was where Davis met Jeff Davis, an investor in the company and a friend of her father’s.

Davis’ first marriage was short-lived but produced a child, who was born when Davis was only 19. (She corrects the age of her divorce at 21.) Not long after Amber Underwood arrived and Davis and her first husband broke up, the future gubernatorial candidate, state senator, and city councilmember began her slow but sure-footed career in public service.

But trouble seemed to follow her. Davis recounts in painful detail two abortions that were unknown to the public before Forgetting to Be Afraid was published. The first was to terminate an entopic pregnancy in 1997, but an even more emotionally devastating late-term abortion occurred a few years later. Tate Elise was found to have Dandy-Walker Syndrome, a rare disorder that causes the two sides of the embryonic brain to form without any connection to each other. The diagnosis was a death sentence for the unborn child. After the diagnosis was confirmed by several physicians, Wendy and Jeff chose to end the pregnancy. Tate Elise was delivered, deceased, by cesarean section. As Wendy lay in the hospital bed, sobbing with her hand over her “now empty womb,” her daughter was taken to be cremated and buried. Davis’ political career left little time to mourn, though, just a couple of weeks to recover physically and emotionally.

Her first run for office ended in defeat. Controversially, on the day of the election, the Fort Worth Star-Telegram ran an editorial criticizing the David for her outspoken stance against the Fort Worth Zoo, even though she had not made that issue a part of her campaign. In her book, Davis does not hide her feelings toward that publication, citing the cozy relationship between the newspaper’s publisher at the time, Richard Connor, and the zoo’s benefactors, Lee and Ramona Bass, as the motive for the attack. Davis would run again, and win, in 1999, serving for nine years before being elected to the state senate.

The most riveting chapters revolve around Davis’ 2013 filibuster that temporarily stopped the passage of Senate Bill 5, which proposed severe restrictions on facilities that provide abortion-related services. Every hour of that fateful day is described in minute detail by the author, who piles tense moment atop moment to the point that it becomes easy to forget that, in the end, she did succeed.

Despite considerable media exposure since its early-September release, Forgetting to Be Afraid has yet to top 5,000 sales. By comparison, Hillary Clinton’s new memoir sold 85,000 copies in its first week alone. While Davis’ memoir is largely a carefully crafted narrative that skirts many controversial moments, including the reasons behind her and Jeff Davis’ divorce, her rich history, written in a brash, folksy voice, is as open and confessional as you will find from an active politician. If there is one thing to take away from reading Forgetting to be Afraid, it is that the life of Wendy Davis cannot be understood through the narrow lens of any one political issue. It must be taken whole or not at all.

Forgetting to Be Afraid by Wendy Davis