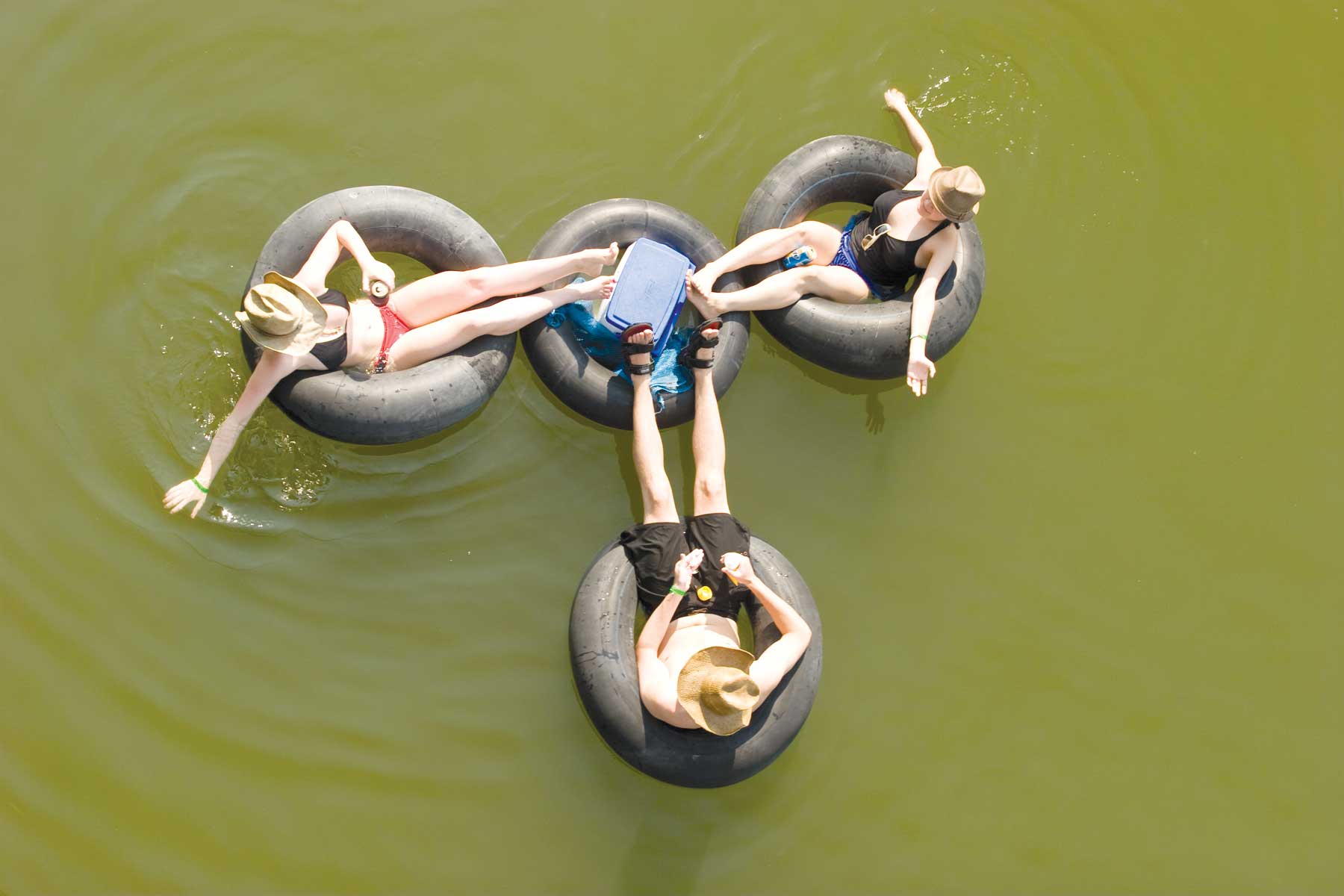 I finally found the opportunity to visit the Amon Carter Museum of American Art and enjoy Terry Evans’ photographic exhibit, Meet Me at the Trinity. The impressive work, commissioned by the museum, represents a vision of a river long troubled by neglect and pollution but now suffering from too much of the wrong kind of attention, as illustrated by a photo of graffiti sprayed in black on a Trinity River stone abutment. The spray-painted words ask, “What does this have to do with nature?”

The river has become more a viaduct than a stream. Her waters seem murky and stagnant. One telling portrait shows a man and his teenage daughter floating in the flotsam on tubing day.
Most of Evans’ images capture the working poor and homeless who gather for refuge along the riverbanks. There are runners and walkers, bicyclists, and families reclining on 4th of July blankets surrounded by ice chests and picnic baskets and towels they barely use, for no one ventures into the Trinity for a casual swim. They all seem to somehow know better.

It is this issue of water quality that neither the Tarrant Regional Water District nor Trinity River Vision officials are willing to address. They go blithely about, completely ignoring the problem, although, according to Jeff Prince’s Oct. 9, 2013, Fort Worth Weekly article (“Does Untested = Clean?”), evidence indicates that there are real concerns. San Antonio River authorities provide weekly testing and public disclosure of the results,  while Trinity officials test only once a month and do not publish the results. Instead they provide a disclaimer for all tubers to sign, absolving the TRV from any responsibility for any possible disease acquired in the water.

In fact neither the TRWD nor the TRV addresses the issue on their websites, but they promote “Rocking the River,” a party much like the popular floats down the Guadalupe River at New Braunfels. Of course, everyone knows that the Guadalupe is a clean river, safe for swimming.

Such is not the case for the Trinity. A January 2010 article in The Dallas Morning News concluded that “The Texas Commission on Environmental Equality has said that the Trinity and its branches are too high in pollutants, especially bacteria from sewage, to be safe for extended human contact.”

Little has been done to change that reality. The waters in front of Panther Pavilion and all along the stretch popular for tubing,  rock music, and beer drinking are still not safe for human immersion, yet the “Rocking the River” celebrations continued weekly throughout the summer, with hundreds of young people floating along, assuming the Trinity Regional Water District and the Trinity River Vision officials were telling them the truth about their safety.

I am reminded of Lady Bird Lake and the Colorado River waters in downtown Austin, where the waters are uncommonly clean and safe for swimming and bass fishing, not like the Trinity where only a few thousand trout are tossed into winter waters for quick catching. We are told that the new Trinity River Vision will include restored habitat for ducks and aquatic life, protection from rapid urban run-off, and a respect for animal life as well as human.

Many positive changes have taken place, but cleaning up the river and telling the people the truth about the waters would go a long way toward enhancing the pleasures of living with the living waters. Heck, maybe we could snatch some of those Lake Austin bats and provide them with a habitat beneath the new Trinity bridges the city is so proud of.
Right now, the Trinity is a place where people go to feel the presence of water, to sit quietly on the rocks and ponder, to whisper to sweethearts, and, yes, even attend Mayfest or a musical performance at Panther Pavilion. But it is not a river, though I believe it could be.

If forward-thinking people like Mayor Betsy Price would look to the regeneration of the Trinity, maybe folks could fish and swim in clean waters, as they do in metropolitan areas all across America. Just a few of the already-squandered Trinity Vision millions would bring life to the heart of Fort Worth. Save the river first, then build your grand vision.

Kendall McCook is a Fort Worth poet and teacher.