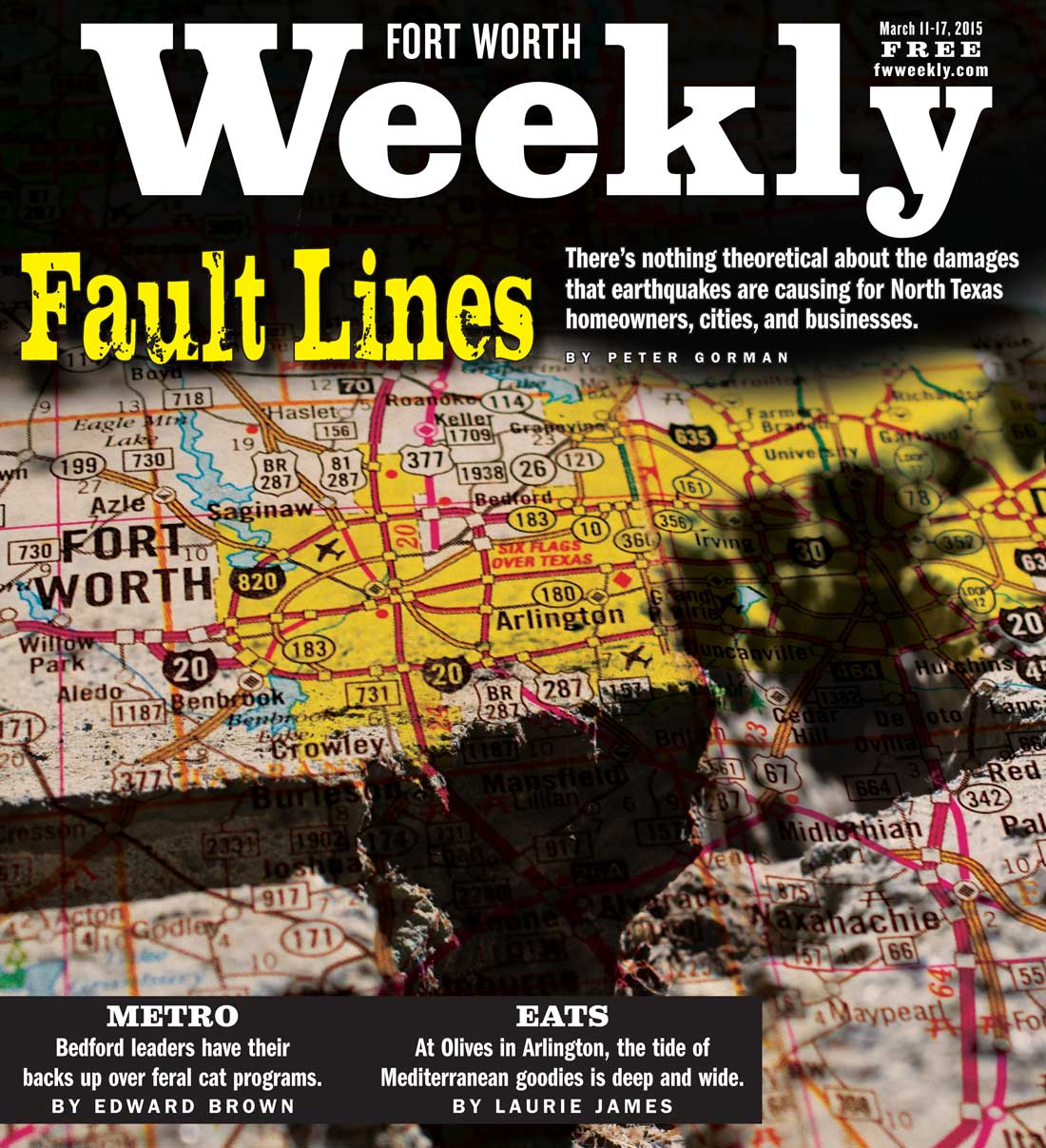 The first time Cathy Wallace felt an earthquake was last Dec. 15. She was sitting with her husband in their Irving home discussing retirement when “the whole house started swaying,” she said. She thought the house might collapse. It didn’t, and in a few minutes things calmed down — for a while.

Since then, with the exception of about two weeks right after Christmas, Wallace said the quakes have been a daily occurrence. She no longer feels safe in her house but can’t afford to leave: The cumulative damage the quakes have caused to her eight-year-old home has left it unsalable, she believes. Her driveway has sunk three inches from the level of the garage floor. The garage walls have cracks. The sheetrock is separating from the ceilings. Her front door no longer opens easily because the frame has been wracked.

Wallace is not alone in her troubles. On the other side of Fort Worth, Lynda Stokes, mayor of the tiny Parker County town of Reno, said she returns home almost daily to find the pictures on her wall askew. One quake last year opened a crack in the floor of city hall that extends across the room and up a wall. All through last year, she fielded dozens of calls from people complaining of cracks in their commodes, cracks in their homes’ foundations, cracks around their doors.

Then there are the sinkholes. Longtime drilling critic Sharon Wilson said that in Azle and in the very active Eagle Ford shale area in South Texas, sinkholes have opened up following quakes.

The damage to homes and neighborhoods can last longer and, like the quakes themselves, go much deeper than they first appear. What’s so hard about patching a crack in sheetrock? Nothing. But with the quakes continuing, who’s to say that new cracks won’t appear or that a rebuilt driveway won’t sink again? And what effect is all the shaking going to have on buried water and gas lines?

“Certainly the values of the affected properties have gone down considerably,” said Linda Seto, a former freelance journalist. “I can’t imagine anyone would want to buy a house here in south Irving now. Heck, the earthquake story has been on national news. And now that they’ve woken up the underground fault, who knows if it will go back to sleep again?”

In North Texas, until just a few years ago, earthquakes were unheard-of. Between 1960 and 2008, not a single quake was registered in the region. Then came the onset of heavy drilling in Johnson, Tarrant, Parker, Wise, and Dallas counties, and suddenly shaking ground became routine in several areas.

Basic logic pointed to the gas drilling in the region as the cause, but the drilling companies were quick to dismiss the idea as extremely unlikely because of the depth of their wells and the fact that they were removing only gas, water, and chemicals they’d pumped into the holes, leaving the earth’s subsurface structure essentially intact.

Geologists and geophysicists in Texas, Oklahoma, Arkansas, and elsewhere have concluded that the thousands of quakes in the region are tied to the disposal wells, also known as injection wells, where drilling companies dispose of toxic waste by injecting it deep underground at extremely high pressure. Those geologists believe that the injection wells have changed the pressure on underground faults. Other scientists say there’s more work to be done on pinning down the cause.

For hundreds of North Texas homeowners, however, the debate is no longer academic, as the quakes continue to damage their houses, their property values, and their peace of mind. For them the quakes are a real threat, and they are beginning to pressure their governments to do something. A standing-room-only crowd turned out in Irving in January to demand answers and action from the city council there. A year before that, angry Azle residents met with Texas Railroad Commission officials who said they were only there to listen, not to answer questions.

Thus far, government has been of little help. The Railroad Commission, which oversees oil and gas drilling and disposal wells, also denies there is any connection between quakes and the drilling industry.

People who are dealing with the effects of those quakes aren’t impressed with that kind of answer. Azle officials have said the quakes there were tightly grouped between two injection wells. Stokes said that Railroad Commission records show that the greatest quake activity around her town came when injection well activity was at its heaviest and that the quakes slackened off when the well operators ratcheted back on the pressure they were using to inject the wastes underground.

And that period right after Christmas when the quakes stopped in Irving? Wallace said that was when “no one was using the injection well” closest to her neighborhood.

“We need industry to get on top of these issues,” Wilson said, “but for that to happen they’ll have to get out of denial first.”