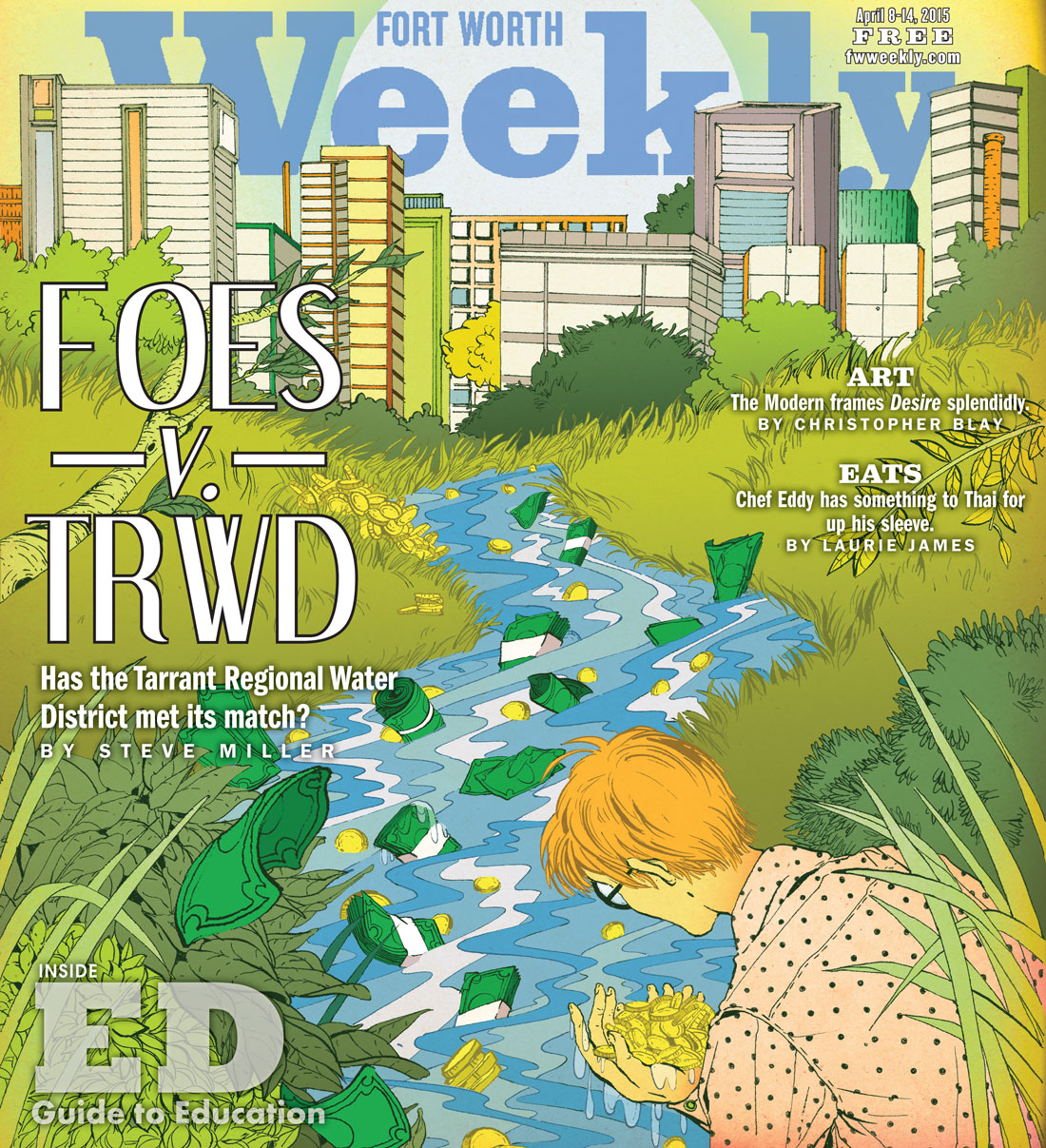 The friction between the Tarrant Regional Water District and its outspoken foes has moved to the state attorney general’s office. Texas’ top law enforcement agency has been presented with a 2,500-word complaint that alleges the district is abusing its power by withholding public records, abusing its eminent domain powers, and violating the state’s nepotism laws.

The complaint is the latest salvo between the district and a local cadre of political operatives who are fighting for control of the district, discord that has been simmering for the past five years.

Chief among the exhibits presented to the AG’s office are documents showing that TRWD paid more than $500,000 to the law firm of Brian Newby –– a former board member and husband of TRWD chief financial officer Sandy Newby –– between 2009 and 2013, according to records obtained by Fort Worth Weekly.

The payments stem from a $10,000 monthly contract between Brian Newby and the TRWD.

The state review is being done on the heels of a grand jury investigation in Henderson County, with which the TRWD has been cooperating.

“The grand jury has had complaining witnesses about the TRWD in my office, and those witnesses have made allegations about the TRWD,” said Scott McKee, Henderson County district attorney. “I have met with attorneys from the TRWD and informed them of the allegations. And any time there’s an investigation into potential public corruption, we feel it’s best for all sides to handle that as quietly as possible until the grand jury takes action.”

The water district, a publicly funded operation created in 1924, is charged with ensuring that North Texas has water. To get that water, TRWD constructs and maintains pipelines and levees. The district is powerful in that it can and does rely on eminent domain to secure pipeline passage, earning the district the enmity of some of those in the path of the pipelines. It’s not so much the work of the district that has put it under fire but the way in which it does that work, including what many claim are cozy relationships and a knack for tightly guarding its way of doing business.

Records show that the Newby payments began in 2009 as part of a contract between the TRWD and Cantey Hanger. Under provisions of the contract, the Fort Worth law firm would handle TRWD’s “needs for legal services of legislative, regulatory, and strategic planning services covering the water development efforts of TRWD,” according to the contract, which was signed on the district’s behalf by Executive Director Jim Oliver.

“Brian Newby will serve as the primary attorney,” the contract said. “The hourly rate is $350.”

The Newbys have been married since September 2010, according to county records.

“Mr. Newby’s firm, Cantey Hanger, has served the district in this capacity since the 1980s, well before Mr. Newby’s 2010 marriage,” said Chad Lorance, TRWD communication manager, in an e-mail. He declined to be interviewed. “The law firm of Cantey Hanger reports directly to Jim Oliver, and they frequently work with TRWD staff members on a wide range of district-related matters. Mr. Newby’s relationship to the district’s financial officer is always disclosed to the bonding companies who fund our large capital projects, and there has been no concern about that relationship on their part.”

The Newby couple is one of several personal and professional relationships that form the crux of the information presented to the AG’s office.

Executive Director Oliver is also the brother-in-law of Madeline Robson, who retired last year from her $156,000-a-year job as administrative director at the district, according to the complaint, which was submitted early last month.

Records show Robson had been an employee of the district since 1986, the same year she married Oliver’s brother, John, in Harris County.

The complaint also noted that the daughters of TRWD Planning Director Wayne Owen have both worked at the district in low-level clerical positions.

In many instances, the hiring of relatives or friends –– sometimes called nepotism –– is not illegal unless there is an express policy prohibiting a hire, said Robert Wechsler, director of research at City Ethics, a nonprofit that offers training programs and advice to public bodies on developing ethics policies.

In the case of the Newby contract, it would be best for him not to take the work because of his wife’s position at the district.

“But then,” Wechsler said, “he may not be popular at his law firm because the lawyers would tell him that there is no conflict in representing a company your wife works for.”

With the Robson-Oliver connection, again, Wechsler said, there is nepotism, but it’s doubtful it would rise to a criminal act.

The complainants are residents who have fought the district over what they claim are repeated efforts to dodge the state’s transparency laws and over a flagrant use of insider deals and hiring of relatives at TRWD.

Many are acolytes of Monty Bennett, a wealthy Dallas hotelier who has spent hundreds of thousands of dollars in legal fees since 2011 battling the district over its quest to exercise eminent domain to take part of his family ranch in Henderson County.

In one lawsuit, Bennett accuses the district of violating the state’s open meetings act by using committees to get measures passed, away from public scrutiny.

Over the years, he has sought volumes of records of the district’s business as the case winds through the state court system.

He has funded several of the district’s opponents in their campaigns for district board spots. His lone success is Mary Kelleher, who captured her spot in 2013.

But he has so far been defeated in the courtroom by the district and has cost the district close to $1 million in legal fees, said board member Jack Stevens.

The general public, including some media outlets, has had a hard time getting something as simple as a campaign finance report for its own board candidates. In some cases, the district will deny access to documents in violation of state statute.

Many attribute the difficulty in obtaining information to TRWD’s mercurial president.

Oliver, foes say, is the anti-transparency force that keeps TRWD business on the down-low whenever possible.  He would not comment for this story.

He has engaged in feisty combat with Kelleher, who is trying to access many records that the public has not been able to. Most recently, she drew Oliver’s ire during a meeting in the fall when the district’s legal budget had to be increased.

Oliver, she said, blamed her in part for the increase.

Her colleagues are likewise unamused by her repeated requests for documents that include lobbyist payments check stubs, e-mails between district officers and lobbyists, and expense reports for board members.

They suspect her, perhaps with good reason, of simply being an agent for Bennett.

“She wants copies of records so that she can take them to Monty Bennett,” Stevens said simply.

Even if the complaints to authorities and the various investigations go nowhere, the gripes are an irritant to a district that for years sailed along with nary a question as to its operation.

Their concerns have some merit.