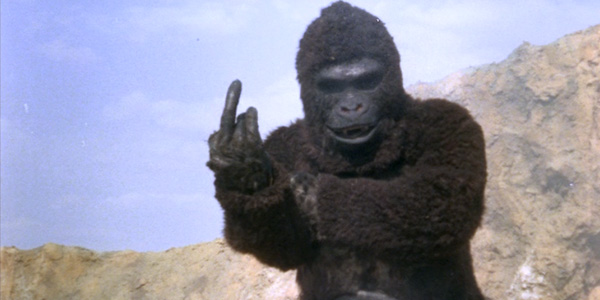 You could probably call Wondercrust Movie Watchers Club’s move to Thursday nights Must-Not-See TV, though the visuals at these events are technically movies. And, oh, what terrible movies they are. To paraphrase Delroy Lindo’s character in Get Shorty, you’ve probably seen better film on teeth. But since cracking wise over dumb dreck is Wondercrust’s (wait for it) bread and butter, the crappier the flick the better. Blending snappy edits and snappier remarks into an entertaining local take on the ol’ MST3K formula (no, none of the writers is a robot, as far as I know), Wondercrust’s comics provide a running commentary over shitty b-movies with breaks in between for beers.

This month’s cinematic barrel of fish scheduled for the firing squad is the 1976 Korean z-grade King Kong rip-off A*P*E. If the titular ape climbs a building in this turd, you can probably expect to hear the Wondercrust peeps launch a cringe-inducing joke about some skyscrapers you didn’t really think about too much until some planes crashed into them. In other words, if you’re easily offended, well, they’re all gonna laugh at you.

But never fear because if your tender sensibilities (patriotic or otherwise) get cowed by off-color jokes, you can get your shit together with the multi-colored sonic palette provided by Fort Worth psych-rock faves Secret Ghost Champion, who perform after the movie.

2.) If you’re a metalhead with a heart of, er, gold, head to Alta Mere this weekend for the Fort Worth Rockers Against Multiple Sclerosis Benefit fest at The Rail Club (3101 Joyce Dr., 817-560-7245) and nearby Tomcats West (3137 Alta Mere, 817-570-9966) for a badass concert with a high volume of high-volume bands, 15, to be exact. Friday’s lineup starts at 6 with Novocaine, Drivereleven, Muthalode, The Cosmic Trigger, Skard Soul, and headliners Caddis. Saturday’s bill starts at 3 with 3Eighty3, followed by 50Thick, Neffarious, DANK, Horror Cult, BIG OKIE DOOM, CROMA, and Blood of the Sun, with Destroyer batting cleanup. Cover is $10 per day for both venues.

3.) Before you say, “Again with the metal!” I’d just like to point out that FTW is probably more, you know, stoner rock than straight-up metal. I’d also like to point out that the three-piece hasn’t played in a while, and bassist Nick Huff has taken on vocal duties, so it’s kinda like you’re seeing a newly rejuvenated band in a way. Plus, they have gigantic amps and will probably be enjoyably deafening and sludgy, especially in a room like The Grotto, where they’re playing on Friday night with Between Love & Hate. Travel back in time with this video of FTW featuring former singer Sean Vargas (now of Caddis and Blood of the Sun) at the old Wild Rooster:

Remember that show? “Oh, when she got hammered and flipped that dude off?” you say? Yeah, well, you try getting kinda day-drunk and singing and playing bass at the same time in front of a bunch of people — it’s not as easy as it sounds. That kind of multi-tasking is a careful balance of talent, practice, and humor, and, frankly, Jaffe playing a little loose onstage gives her material that much more of a human touch. The Denton singer-songwriter headlines Shipping & Receiving on Saturday, a little over a year from her previous visit, and even if she finds herself sitting up at the bar again with nothing but beer to idle away the time before her set, well, that’ll be a pretty fun show, too. Either way, dance-party-in-human-form Ronnie Heart opens the gig, and he’s enjoyable to watch.

5.) While it’s not a show in the sense that a few bands play sets at a club and people drink beer and talk to one another, Sunday’s Open Carry Guitar Rally II on the Continental Bridge in Dallas is a show of solidarity for people who like guitars and possibly agree that gun-rights groups like Open Carry Tarrant County are silly, overbearing, delusional, obnoxious, or worse. It’s also a show of force, since participants come armed with axes of the 4- and 6-string variety (and 7-string, because the Rally is open to everyone with a guitar, including total nerds). If you’re a gearhead, you’ll have plenty of guitars to gawk at and plenty of other gearheads to geek out with. Leave the long guns at home, long guns meaning the kind of instruments you cram bullets into and kill things with and not some guitar metaphor nobody has ever heard of. Of course, if you don’t think assault rifles have a place in American society, we might never have had “Bikini Girls and Machine Guns.” What a country, right?