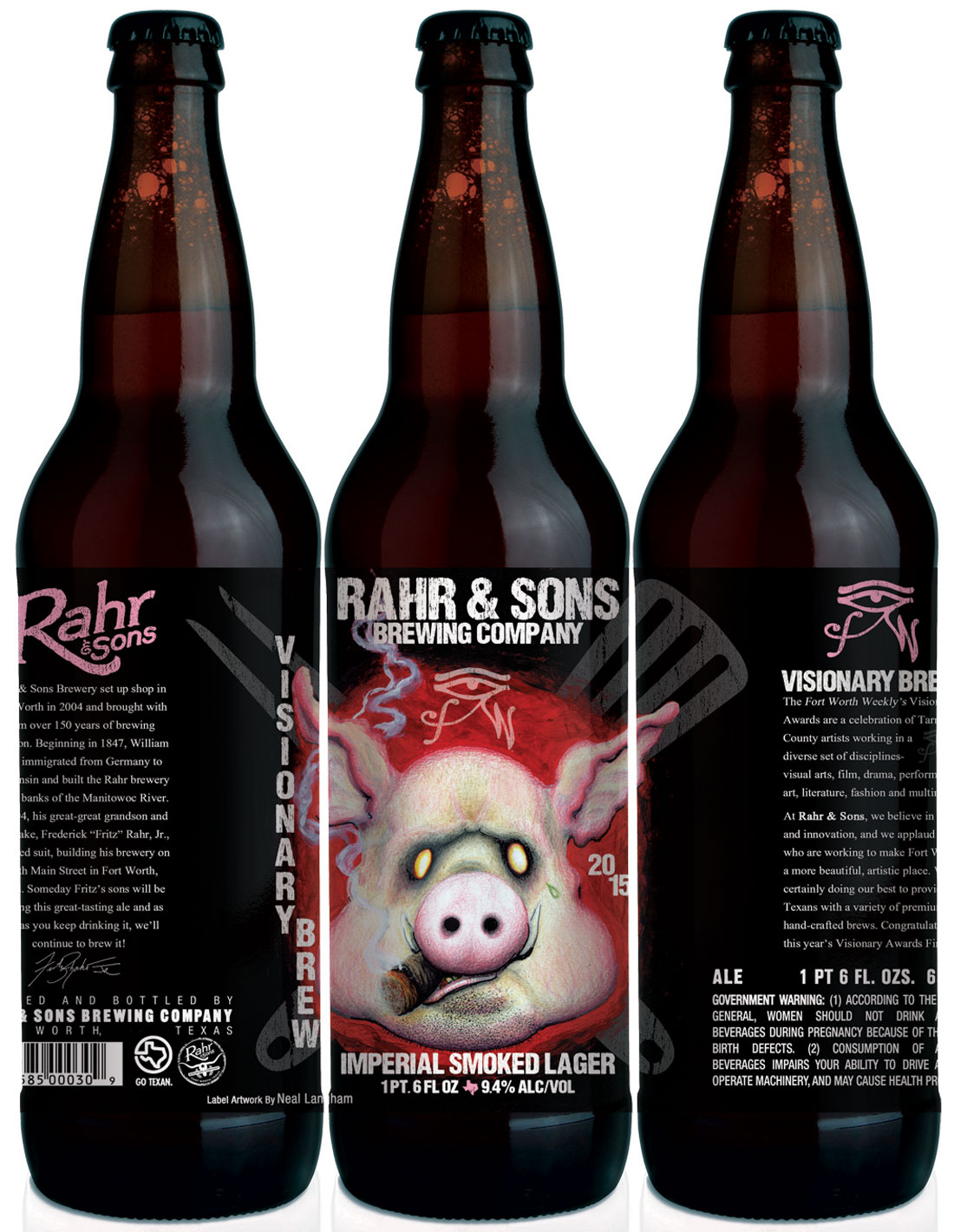 You can’t beat the cigar-chomping pig.

Langham’s painting of a swine with a lit stogie in his mouth beat out about a dozen other submissions.

The 37-year-old married father of two young boys is thrilled.

“It’s hard to put into words,” Langham said. “It sort of feels like validation, but it also makes me want to be more aggressive.”

Langham, who has been working at Mouser Electronics in Mansfield for the past five and a half years, is untrained but has been drawing since he was 4, he said. He started painting only in January.

His first win helped him gain some exposure and feel better about his creative output. “I’m getting a lot of commission work,” he said, noting that his biggest so far has been designing the album cover and t-shirts for Fort Worth country-rockers The Paychecks.

“That’s been really cool,” he said. “It’s been a real big boost as far as confidence in my art and just making me want to challenge myself to become a better artist.”

Langham is excited to work with Rahr again.

“It feels great,” he said. “It’s about all I can say. Top to bottom, everybody there is salt-of-the-earth types, and I couldn’t be happier.”

We will launch the 2016 contest in late summer, and Fritz will choose the winning submission in the fall. Follow the Weekly for more. –– Anthony Mariani

In the entranceway of JPTGraphics, a super high-tech design firm in Irving, looms a piece of art that conjures up a vintage-tech era.

Commissioned by the company last year, “Impressions” is a gleaming 3-by-4-foot surface of possibly an alien industrial terrain where sprockets and gears have replaced trees and where a river of powder-gray washers flows past a central clock that turns several satellite gears in perfect synchronization. The piece represents Sue DeWeese’s foray into steampunk art.

“I looked at [a] photograph [of the piece] and thought, ‘My God, that’s complicated,’ ” the Arlington artist recalled jokingly. “When you’re in [the act of creation], you don’t think about it.”

Just another steampunk aficionado, right? Just another art lover overcome by the phantasmagorical blending of fantasy and science fiction with Victorian-era technology and aesthetics that spans genres but is most visible in comics and film (The Adventures of Baron Munchausen, The League of Extraordinary Gentlemen, The City of Lost Children). Not quite. DeWeese is in her 70s and has been a professional artist for decades, producing mostly nature-inspired oil paintings and sculptures. She has exhibited her work across North Texas at art festivals and fairs and has collectors as far away as New Mexico.

Her shift into steampunk began as a joke of sorts between her and her two grandchildren. For Christmas two years ago, she bought each boy a steampunk-style pocket watch.

“I told them this [style of art] is what I’m going to do for the rest of my life,” she said.

Soon after, the kids returned the favor by buying her a book on steampunk culture.

The mechanical imagery captured her imagination and appealed to her sense of aesthetics –– throughout the 1970s and ’80s, she worked as a graphic designer and mechanical draftsman for several local manufacturing companies.

“All I knew was there’s always gears, which appealed to me for some reason,” she said.

DeWeese now specializes in steampunk for all of her private and corporate commissions, but she is quick to point out that she is no authority on the idiom. She had to buy a book on steampunk art to learn the rules. Yes, there are rules.

“You can’t use Phillips head screws, for instance,” she said. “Steampunk is historically accurate, and yet it’s a fantasy. Steampunk is a glimpse into a fantasy world that developed along steam power instead of electricity. With this art, I’m basically building machines that don’t do anything.”

As devoted to steampunk as DeWeese is, she’s not ready to don a petticoat and leather goggles and start showing up at steampunk-themed conventions.

“I’m Grandma Steampunk,” she said with a laugh. “Folks can come to me.” –– Edward Brown

A Fort Worth Treasure Returns