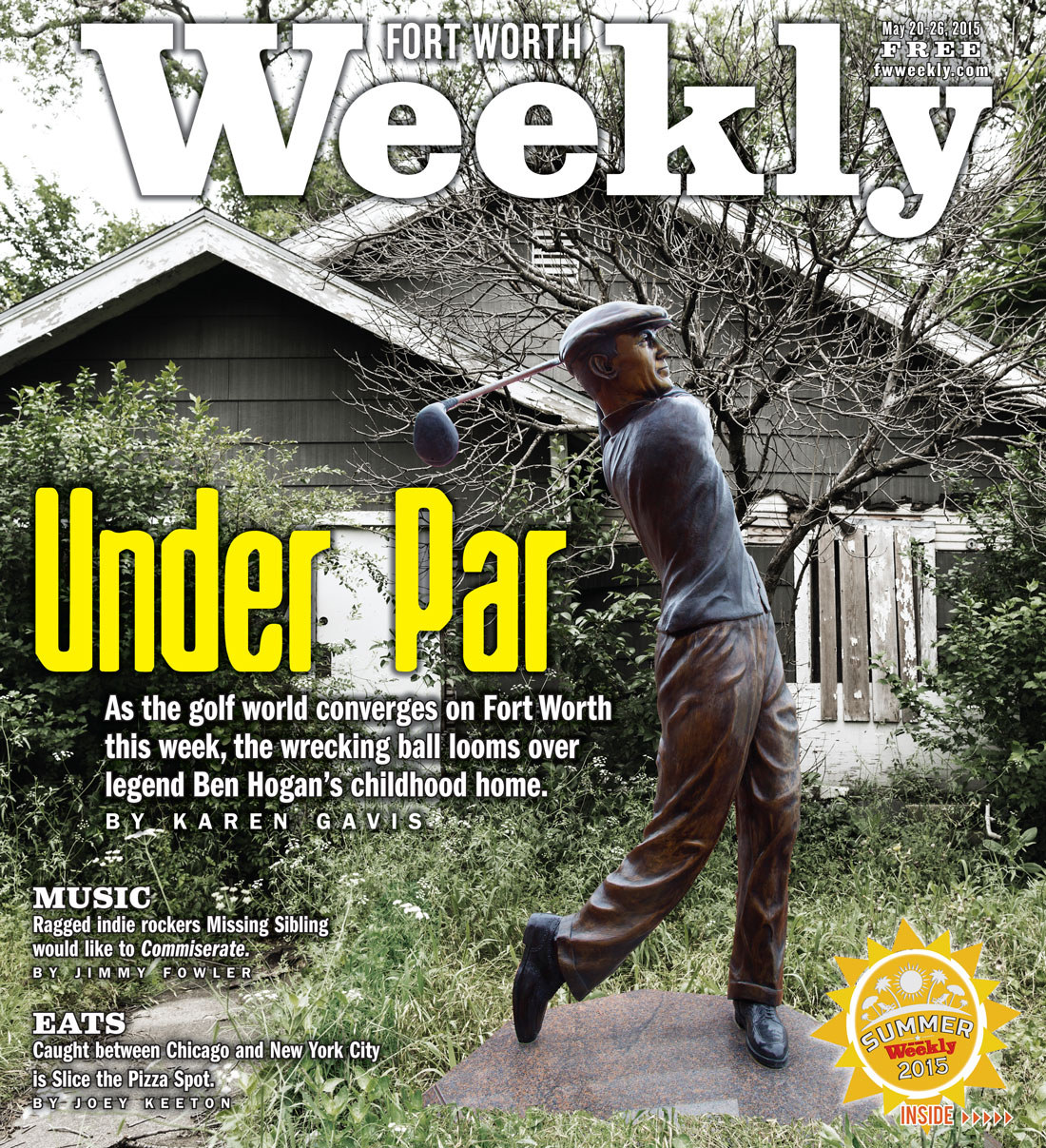 Fort Worth is the center of the golf universe this week. That’s because the Crowne Plaza Invitational at Colonial, one of the oldest stops on the PGA Tour, is in full swing. But while everyone will be keeping an eye on defending champ Adam Scott’s drives and the multimillion dollar purse — and, of course, on all of the pre- and post-parties all over town — the childhood home of one of the world’s best known and most beloved golf legends remains vacant and covered in weeds.

Ben Hogan won the first Colonial National Invitation Tournament, in 1946. He would win again in 1947 and three times in the 1950s, making him the only golfer to win the event more than twice.

Born William Ben Hogan on Aug. 13, 1912, the future sports legend lived with his family in Dublin, Tex., before moving to Fort Worth in the early 1920s. After his father’s suicide, Hogan spent part of his childhood in a bungalow in the 1300 block of East Allen Avenue. Its windows now boarded up and sometimes flanked by towering weeds, the structure remains among other notable properties on Historic Fort Worth, Inc.’s most endangered list.

“It’s more of a cultural landmark than it is an historic building,” said architect John Roberts, HFW board chairman. “The house is not architecturally significant, but because Ben Hogan lived there and played such an important part in Fort Worth’s history, it has cultural significance.”

Historic Fort Worth began its endangered list in 2004 to help historic buildings dodge the wrecking ball, and being on the group’s list means increased awareness for a property. Kate Stephens, HFW preservation resource center manager, said of about 60 individual listings, 15 structures have been saved so far.

Historic properties can be challenging to maintain, and endangered property can be nominated by anyone in the community, Roberts said. Hogan’s childhood home was nominated for the 2013 endangered list by Marty Leonard, whose father, local businessman Marvin Leonard, founded Colonial Country Club in 1936.

Dennis Roberson, tournament manager and unofficial historian for the Crowne Plaza Invitational at Colonial, said Marty Leonard has been a lifelong friend of the Hogan family.

“Her father became a father-figure to Ben,” he said.

Answering the door of his well-manicured home, retired Fort Worth fire inspector Ed Young worried aloud about the condition of the home he grew up in on East Allen. He said he planned to drive over on the weekend and check on things.

“I heard [the grass] is really overgrown,” he said. “And people have been dumping trash over there.”

Weathered planks now cover the white-trimmed windows of the modest charcoal gray home. The mailbox has been stolen, and thieves rifled through recently and carried off the footed bathtub. A sidewalk paves the way down the street to a corner church. Meanwhile, empty lots stand as visible reminders of past neighbors.

But the pecan trees still produce, and crimson roses still bloom outside the home that his parents, Alvin and Cornelia Young, bought in 1955, said Alvin Young, Ed’s brother.

At that time, the neighborhood was interracial, and nearly all of the homeowners who were not black were elderly, Alvin said. Their father a Baptist preacher, the six Young children were taught that, when going to the store, always ask their neighbors if they needed anything and to always count their change back to them aloud when they returned.

“If [the neighbors] needed anything, we would be there to assist,” he said.

Alvin said he and his siblings grew up surrounded by books, and he knew as a child that their home had also been the boyhood home of Hogan. He recalls walking the distance to Glen Garden Country Club just because he knew Hogan had done the same.

“We actually watched Ben Hogan play [fellow golf legend] Sam Snead,” Alvin recalled. “He had a following with us.”

After Alvin became an adult, he began trying to verify that the home had also once belonged to the Hogans. However, people did not believe him, saying things like, “Oh, I don’t think there’s any truth to that.” Alvin said Marty Leonard later helped the family verify through old photographs that Hogan had indeed lived there.

Alvin’s parents have since died, and the home has stood vacant since the mid-1990s. Many of the older neighbors have died as well. Alvin said there is no sign or marker proclaiming that Hogan once lived there, and the newer neighbors aren’t aware of the home’s history.

“We’ll probably eventually just have to tear it down,” he said.

The home’s foundation is sagging, and the place is in such disrepair that Alvin estimates its repairs might cost $25,000. However, it is financially difficult for his family to maintain more than their own residences at one time, he said. As a result, there have been discussions about hiring someone with a backhoe or tractor to come and push the place over.

“We would definitely like to save it,” he said, adding that the family is not looking for any type of financial gain.

“Our gain would be pride in the fact that we were able to send forth our father’s legacy,” Alvin said. “Keep in mind, in 1955, for a black man to purchase a house … was phenomenal in itself. When he passed, that house was free and clear. We never had a hungry day in that house.”