Roberts, who also served on the city’s Historic and Cultural Landmarks Commission Designation Committee, said a lack of funds is basically why nothing has been done with Hogan’s childhood home since making the endangered list.

“We did look to try to find someone to assist [the Youngs] in that,” he said. “I don’t think our efforts have been successful at this point, but we are always looking, and we’re always out there to raise awareness for these structures.”

Roberts said public monies are available for restorations. However, he was unsure if any have been earmarked for the Hogan house.

Liz Casso, historic preservation officer with Fort Worth’s Planning and Development Department, wrote in an e-mail that of the few state and federal incentive programs she is aware of, most apply to income-producing properties or could be applied for only by local governmental or nonprofit groups.

Owners of historic residential properties could possibly get a tax exemption or tax freeze that might help, she said, but obtaining money up front for repairs and restorations is another story.

Hogan’s childhood home does not have a local historic designation.

“This means that we would not be involved in the renovation planning,” Casso wrote. “There is no historic design review required for this site. Also, this means that this property is not eligible to participate in our local Historic Site Tax Exemption program.”

County tax records indicate the Youngs’ property, including Ben Hogan’s childhood home, as having a taxable value of $1,100.

Casso said code enforcement has been reluctant to do anything with the property. She also said that the file she has for the East Allen property doesn’t contain much information and hasn’t seen much activity.

“It has been so long since anyone has asked about it,” she said. “I know it has been on our radar in the past.”

“They have had budget cutbacks,” he said. “That is one of the reasons right now we are having so much trouble with preservation.”

“Due to general budget cuts, a memo from the city manager dated March 4, 2014, outlines the cuts to the city’s preservation program, including staffing,” a post on HistoricFortWorth.org reads. “Rather than 2.5 staff assigned to preservation programming, the city currently has only one full-time staff member in preservation.”

Casso said her department cannot help, either. “In the preservation and design section, we do not really have the staff or funding or resources to take on restoration projects of historic buildings,” she wrote. “It isn’t a function of our section and hasn’t been.”

In addition, Casso wrote that the Hogan home is privately owned, so the city cannot legally just go in and restore or alter the property.

Roberts explained that while no historic conservation districts, which allow more freedoms for homeowners, exist in Fort Worth, there are local historic districts. Historical designations are determined not only by history but also architectural and cultural significance and can be designated individually.

“The reason we always go with historic districts is that it guarantees protection,” he said. “Local is the only historic district that has legal ramifications for demolition without permission, or if I go and remodel my house that is against all the guidelines, then the city can come back on me.”

Casso also said there was some discussion in the past about possibly relocating the home. The Colonial’s Roberson said he also recalls some past discussion about restoring or maybe relocating the East Allen Avenue property but hasn’t heard anything lately.

“Great golfers can actually spin the ball and make it go left to right or right to left,” Roberson said. “Ben was one of the best at that, [and] this golf course requires that.”

You could say no other golfer knew the course as well.

“There were a lot of great players from that era,” tournament director Michael Tothe said, “but he was cream of the crop.”

But no matter how much money is paid out at the Colonial, Hogan will remain the champion in perpetuity.

After a fire destroyed the original clubhouse in 1953, the current clubhouse opened in 1955.

“That’s when the Hogan trophy room was incorporated as well,” Roberson said. “By the time the new [clubhouse] was built, Hogan had become a legend.”

Hogan’s room features a museum housing memorabilia from his career, including videos, gold medals, trophies, and a recreation of the golfing legend’s locker as well as displays of Hogan’s business and writing skill.

“Hogan’s Five Lessons: The Modern Fundamentals of Golf is one of the greatest sports books of all time,” Roberson said.

In a corner of the club’s golf shop, Hogan’s working office from the Ben Hogan Company can be seen.

“If you open his desk drawers, all the stuff is still in there,” Roberson said. “He had an alter ego. He always called himself Henny Bogan. He had a nameplate in his office, and the nameplate [Henny Bogan] is on his desk.”

Roberson described Hogan as a perfectionist who once ordered his company’s first assembly-line production of golf clubs destroyed because they did not meet his standards. Roberson said Hogan bought out the investor and started over.

“He was completely self-made and determined,” Roberson said. “Everything he did, it had to be excellent.”

Roberson said that during Hogan’s retirement, he would come to the tournament and championship dinners occasionally but was kind of a “reclusive, private” person.

“He didn’t do a lot of public speaking,” Roberson said. “He mainly kept to himself.”

“In 1945, [Nelson] won something like 18 tournaments and said, ‘Now I can afford to buy my ranch,’ and he bought his ranch, and he retired. If he ever had a chance to speak [to Colonial brass], he would say, ‘Well, if you hadn’t waited to start your tournament ’til the year I retired, I might have won it.’ He used to love to tease us about that.”

Beneath a poster in the Hogan room lies another relic, a folded silk robe.

In 1949, Hogan was in a vehicular accident with a bus. The 1951 movie Follow the Sun was based on his comeback efforts. The silk robe was given to Hogan as a gift during his recovery and was signed by Bob Hope, Bing Crosby, Dick Powell, Clark Gable, Jack Benny, Groucho Marx, Harpo Marx, Danny Kaye, and Leo Durocher.

After the threat to his career, Hogan went on to win the Triple Crown of Golf in 1953, winning The Masters, the U.S. Open, and the Open Championship for one of the greatest sports comebacks of all time. Tiger Woods won what is referred to as Tiger’s Triple Crown in 2000.

And while the Hogan room at Colonial, the Ben Hogan Museum of Dublin, and other organizations proudly display and maintain artifacts from Hogan’s legacy, for more than half a century, the Young family has proudly kept a small portion of the famed golfer’s early history.

“I’d hate to see just a marker there,” Alvin Young said. “But we’ve been going on 20 years trying to do something with it. This has been a long tenure keeping hope alive.” 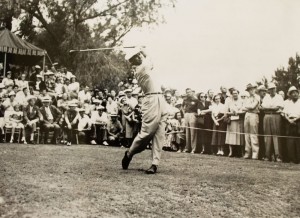