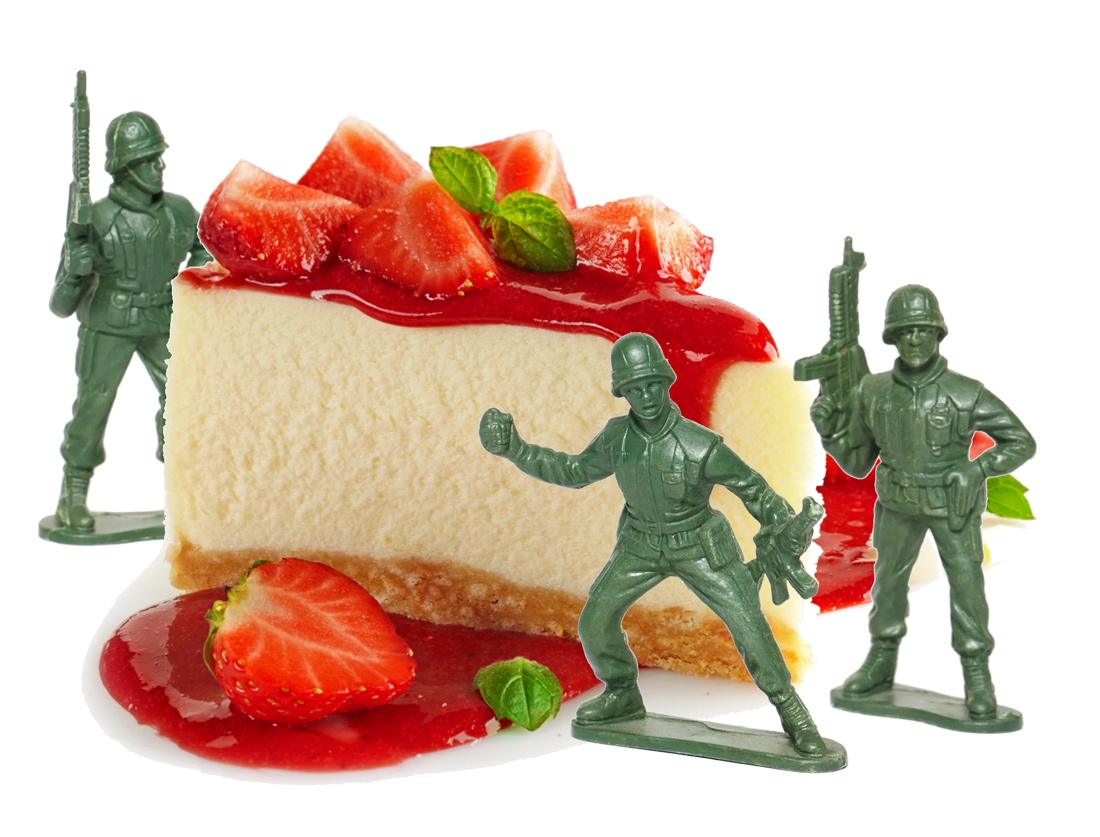 I was sitting in the dining room of The Cheesecake Factory (455 Commerce St., 817-348-0810) along with 200,000 other diners when I became paralyzed by its vastness. The place itself could house an aircraft carrier, and its 21-page menu –– 21 pages! –– must have been written by Leo Tolstoy. Or, for you whippersnappers out there, William T. Vollmann.

And who were all of those people? I guessed most of them were out-of-towners spending the afternoon learning how to use a linen napkin. And to be sure there were a lot of fanny-packed blue hairs bobbing like buoys in the endless sea of humanity streaming in and out of the place. But the Vegas casino-sized eatery was also filled with families, downtown workers on break, and people like me, who were there to discuss business.

I hate that the Factory is so popular, but I get it. The typical entrée is less than $15, and the menu has something for everyone. The décor is fancy, in an accessible, Disney-cruise-ship sort of way: swirling light fixtures, generic food murals, black-and-white tiled floors. And the food?

Not bad. Not bad at all.

Don’t get me wrong. I’d rather spend my hard-earned dollars at Angie’s Bikkles Caribbean Restaurant (1704 Galveston Ave., 817-443-5757), Campestre Chula Vista (1950 Menefee Ave., 817-740-7899), or any of the dozens of other outstanding independent restaurants around town. But as my mother would say, a mammoth chain is better than a sharp stick in the eye.

Everything except (ironically) the cheesecake is made in house from scratch. And though the fare I sampled on a recent weekday lunch visit suffered from lack of sophistication, it was just good enough to satisfy me and bland enough to attract the fanny-packed hoards.

The appetizer of sweet corn tamale cakes ($10.95) was covered in sour cream, bits of fresh avocado and tomato, and a mildly spicy salsa verde. The taste of the sweet little cakes was mostly obscured by their ample toppings, and the whole dish was a mushy mess.

I didn’t know what to think about my guest’s entrée. The size of her chicken marsala and mushrooms ($17.95) was cartoonishly large. There were enough chicken cutlets, pieces of bowtie pasta, and ounces of wine sauce to fill the trunk of a Buick. The herbaceous sauce had a lovely zing, and the pasta was cooked perfectly al dente — I’m sure it made for a nice dinner that night for her, and hopefully she donated the rest to Haiti.

The caramel pecan turtle cheesecake ($7.95) was a passable if unspectacular ending to my meal. The Factory’s namesake dish was a little heavy for my taste. I prefer the airier offering at a place like The Capital Grille (800 Main St., 817-348-9200), another popular chain just a few blocks away.

If I had one complaint about my visit (other than the psychic harm of having to admit the food didn’t make me retch), it’s that the service started off agonizingly slow. We had to wait about 15 minutes to order our drinks. Had we been in a rush to get back to work, the slow start to our lunch might have been upsetting. As it turns out, the extra wait gave us time to peruse the ads (I’m not kidding) in the seemingly never-ending menu. Once our server appeared, things ran smoothly.

I was a little struck by the irony of a mega-chain restaurant that purveys in hillocks of affordable fare occupying the space that once housed one of the city’s few remaining bookstores. The only other “bookstore” downtown is Thompson’s Bookstore, and it’s not a bookstore at all. It’s a bar –– but it has shelves filled with real-life books. And only some of them are longer than The Cheesecake Factory’s menu.