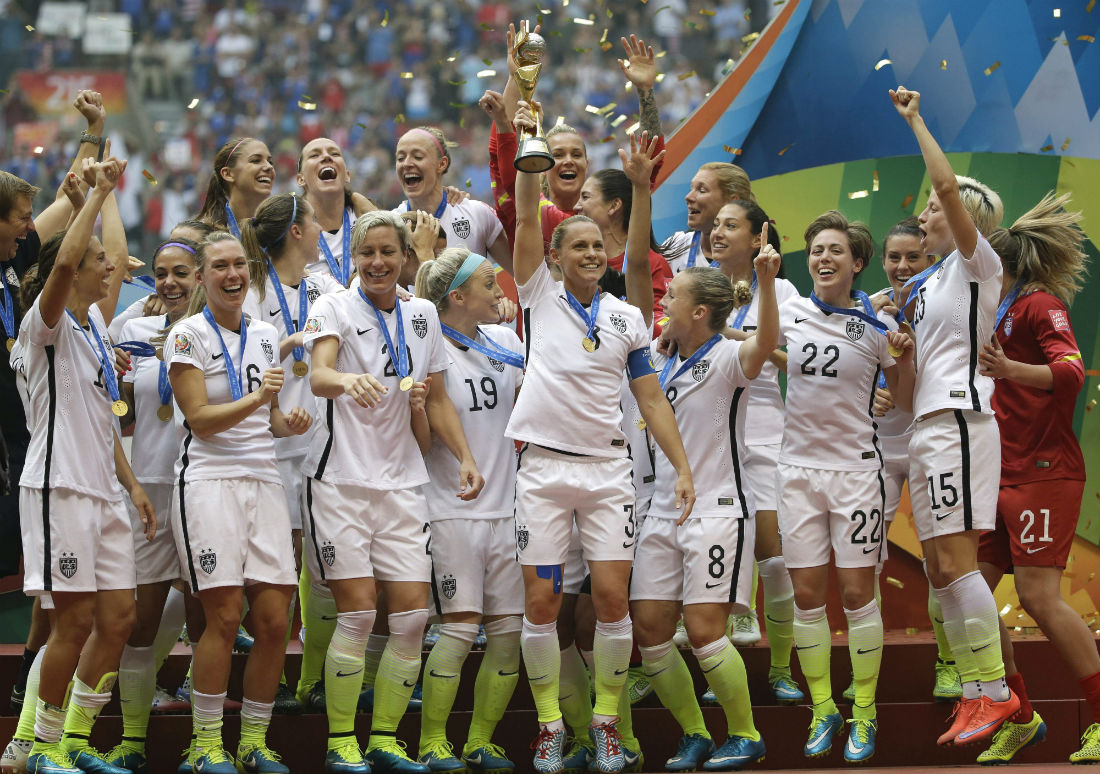 As you’ve no doubt heard by now, Team USA won the Women’s World Cup last night, smashing Japan 5-2. Carli Lloyd scored three goals, won the Golden Ball trophy (the tournament’s MVP award), and generally looked like Messi, Ronaldo, the other Ronaldo, and Pelé all rolled into one. The win marked the end of USA’s long, torturous 16-year World Cup drought, and those last words just made all the Dutch soccer fans curse at me and throw things. Let’s cover this last, triumphant round of questions and answers.

Tell us honestly, O high and mighty soccer expert, did you see this final result coming?
Not really. I figured USA would win. I figured Japan’s inability to finish chances and trouble defending set pieces would come back to haunt them. I figured Ayumi Kaihori looked less than stellar in Japan’s net. I figured an early lead for USA would put the Japanese at a huge disadvantage. But four goals in the first 16 minutes? Only in my rosiest possible predictions.

How spectacular was that last goal that Lloyd scored from the halfway line?
It’s the goal of the tournament (see below). It’s the greatest goal in Women’s World Cup history. It completed a hat trick, making her only the second player ever to score one in a World Cup final, the other one coming on the men’s side when Geoff Hurst bagged three for England against West Germany in 1966. And it might be the greatest goal in the history of World Cup tournaments, male or female. I can’t remember a player on the men’s side scoring from halfway in the World Cup, though longtime soccer fans may remember that USA’s Claudio Reyna came close in the 2002 quarterfinal defeat to Germany. Such plays are slightly more common than you might imagine thanks to goalkeeper errors and shooters thinking, “What the hell, I’ll try this,” but such a goal has never been scored on a bigger stage. By itself, that goal would have made Lloyd into a soccer legend. Along with the five other goals she scored in this tournament, she staked a claim to being one of the sport’s greatest-ever players. What a far cry this is from the ineffectual Lloyd we saw in the group stages.

Yeah, how did she turn into the unstoppable monster that we saw?
It was down to Jill Ellis’ lineup change in the quarterfinal against China. Losing Lauren Holiday and Megan Rapinoe to suspension for that game made her reconfigure the midfield and trust Morgan Brian, the youngest member of the squad, to act as a defensive shield. Brian did that and tallied an assist into the bargain, but the real difference-maker was to push Lloyd higher up the field, where her natural position is. Yes, this change was essentially forced on Ellis (and no, she wasn’t playing rope-a-dope like one writer for The Guardian speculated), but part of coaching is reacting to shifting circumstances, and once Ellis saw how much more effective the new midfield made USA, she stuck with her personnel. Then, when Holiday and Rapinoe returned, Ellis relegated Abby Wambach to the bench and let USA run other teams ragged. The result was three dominant victories to close out the tourney.

How sad should we be for Wambach?
Just a little bit. She remains stuck on 14 World Cup goals for her career, one short of the all-time record held by Marta. (She would be tied with the Brazilian if she hadn’t decided to take that penalty against Colombia left-footed.) Aside from her game-winning goal against Nigeria in the group stages, she didn’t contribute much to USA’s attack. Still, after all the previous times she carried Team USA, there’s some justice in the rest of the team carrying her this last bit of the way. A World Cup winner’s medal was the only award in the sport that was missing from her résumé, and I’m sure she’d gladly take that over any individual record. Team USA allowed her and fellow veteran Christie Rampone to perform the ceremonial trophy lift together at the end, and for players who have given everything to the cause, it was a sweet capper to their careers. On top of all that, Wambach made an unexpectedly moving moment right after the final whistle blew, when she ran to the stands and hugged her wife, Sarah Huffman, a scant nine days after their marriage became legal in all 50 states. #LoveWins.

How did it go so wrong for Japan?
I mentioned Japan’s trouble defending set pieces, which has caused them problems all tournament. USA was the first opponent that was able to make them pay for it. However, even from open play USA was dominating, and that’s partly because coach Norio Sasaki seemed unprepared for USA’s 4-2-3-1 formation. This is mystifying given that he’s one of the sport’s sharpest coaching minds, and doubly so given that USA had used that formation to such devastating effect against Germany. Japan’s excellent midfield kept the pressure off the defense until now, but USA brutally exposed their defenders. Sasaki wound up making two substitutions in the first half (including removing the shell-shocked Azusa Iwashimizu) and his team outscored USA 2-1 after that, but the damage was more than done. Give Japan credit for not packing it in after they went 4-0 down, and contrast their spirit with the way Brazil’s men gave up during their 7-1 flaying at the hands of Germany last year.

Is this the greatest USA team ever?
One of the reasons USA was so keen to win a third World Cup title was the mystique created by the Mia Hamm-Kristine Lilly-Julie Foudy USA team from 1999, which won the trophy on home soil and captured the public’s imagination. The burden of living up to that team’s legacy had begun to wear heavily on the American players. This year’s team dominated defensively long enough for their offense to catch up, and by the end they looked like a team that beat the whole world. No disrespect to the ’99ers, but if you invented a time machine and pitted them against the current team, they’d get trounced just as surely as the Japanese did.

What topic was trending on Twitter following USA’s victory over Japan?
“Pearl Harbor.” All of you who made that happen, you should be ashamed of yourselves.

Did you see the third-place game?
Yes, I did, and it was inspiring. Laura Bassett came back from her massive stroke of bad luck and played tremendously. The German defense eventually wilted, and Tabea Kemme pulled down Lianne Sanderson in the penalty box. You can call that a soft penalty (the Germans certainly did), but it was the right call, and much like USA had done in the semis, England outplayed the Germans and deserved its win. They can also take consolation in knowing that neither they nor anybody else would have beaten USA in the final, so destructive were the Americans. There’s still progress to be made in Britain, as this patronizing celebratory tweet from England’s own soccer association makes clear, but Coach Mark Sampson (a Welshman coaching England!) and his charges made history for their country.

What were the best goals of the tournament?
The killjoys at FIFA are still keeping highlights off YouTube, so check this post in a few months when I will have embedded YouTube clips of the goals.
10) Dzsenifer Marozsán (Germany) vs. Sweden
9) Wang Shanshan (China) vs. Cameroon
8) Laure Boulleau (France) vs. South Korea
7) Ange N’Guessan (Ivory Coast) vs. Norway
6) Amandine Henry (France) vs. Mexico
5) Lieke Martens (Netherlands) vs. New Zealand
4) Maren Mjelde (Norway) vs. Germany
3) Lucy Bronze (England) vs. Norway
2) Mizuho Sakaguchi (Japan) vs. Netherlands
1) Carli Lloyd (USA) vs. Japan

What grade do you give Canada as tournament host?
B-plus. It goes without saying that the venues were clean, well-run, and welcoming to the fans. Teams were scheduled to play in cities that were easily reachable for their fans: Japan played a number of games in Vancouver, France had a key game in Montreal, and USA had most of its games in Vancouver and Winnipeg, cities close to the border. What keeps our neighbors to the north from an A grade are the artificial turf and the failure to use either Toronto or Hamilton as a venue, supposedly in deference to the Pan American Games going on in those cities.

Besides USA’s victory, what else will you remember from this World Cup?
The scary form of France and Germany in the tournament’s middle stages (though as USA showed, it’s better to peak at the end than in the middle). The unexpected joy for Thailand, Netherlands, Costa Rica, Cameroon, and Colombia, demonstrating the rising quality of women’s soccer around the world. The gut-wrenching grief for Canada and Christine Sinclair, for France and Claire Lavogez, for England and Laura Bassett. The sweet redemption that England found in taking third place, and the way a country that thinks of itself as the cradle of soccer came to embrace the women’s side of the sport. And yeah, that halfway goal by Carli Lloyd. Hope you had as much fun reading these posts as I had watching the games. See you soon, soccer fans.