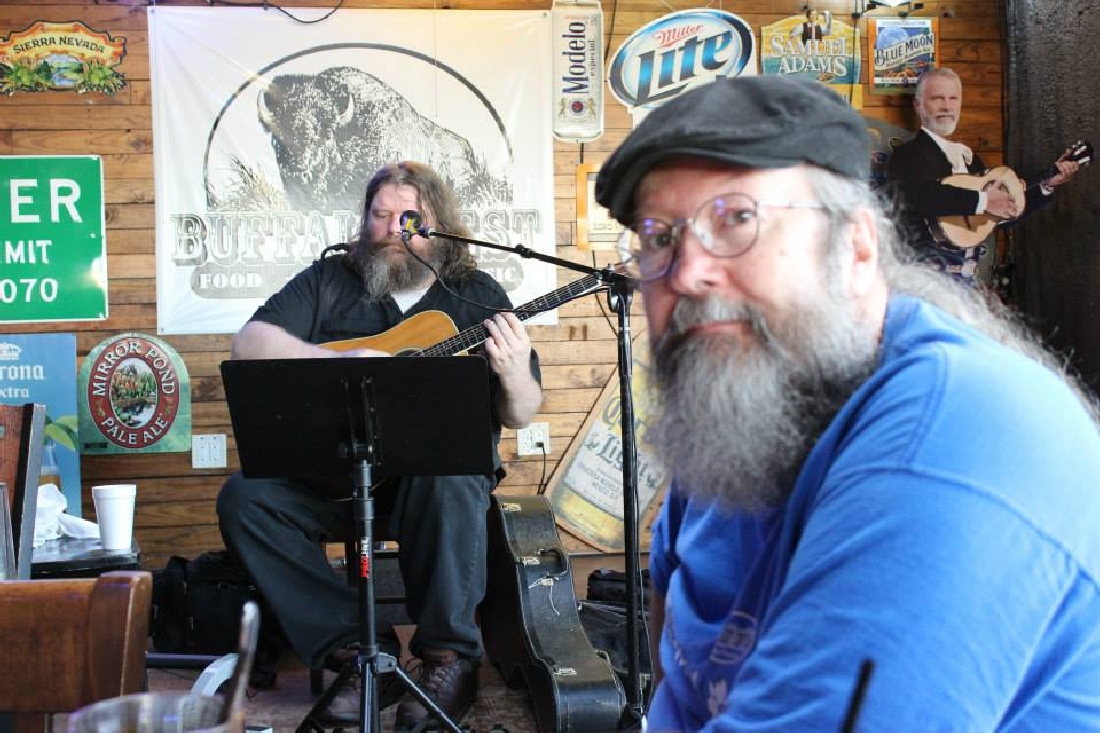 On June 22, Fort Worth lost one of its greatest music fans. Mike Woodhull, a gifted graphic artist, record collector, and music maven, died at home in Benbrook of a massive heart attack. A fixture at live shows at Lola’s, Fred’s, the Keys, and the Mule, Woodhull was also known to many from his days selling records at Peaches and Sound Warehouse.

I met Mike when I came to Fort Worth in 1978 to open Peaches at 6393 Camp Bowie Blvd. (The man that brought me here ran a record store at that address for 25 years, under four different corporations.) Mike was our back room man, which meant he was the hardest working person in the store. Besides handling all of our shipping and receiving, he used his artistic talent to create displays for the store. Being an obscurantist ass (think Jack Black in High Fidelity times ten), I looked askance at Mike because the things he dug were so commonplace: the Beatles, Mickey Mouse, M*A*S*H. But in later years, I came to realize that Mike was onto something a lot deeper than “I know something you don’t know.” It was the thing his hero John Lennon said was all you need.

The things and people Mike Woodhull loved, he loved wholeheartedly, and his greatest joy in life was sharing his enjoyment of those things with those people. At a gathering of his friends at the Winscott Road Funeral Home in Benbrook on July 2, several people remembered him as the guy that would always save seats for them at shows. (Woodhull’s widow Kristin requested that attendees wear jeans and their favorite rock band T-shirt.) Others recalled his skill as a digital artist (which is how he made his living after Sound Warehouse closed), his love of a good story, his enthusiasm for baseball. The bowling alley in Benbrook where he bowled closed down for an hour and a half so all the employees could come and say goodbye to their friend. Besides all the musicians and fellow fans, there was a contingent from the Benbrook Police Citizens on Patrol, and a man who’d known Woodhull in the Boy Scouts, 50 years ago.

And there was music. Big Mike Richardson took the stage with the other members of Me and My Monkey to play a selection of Beatles favorites, including “I Want You (She’s So Heavy)” (a perpetual Woodhull request), “In My Life,” “And Your Bird Can Sing,” and “I’ve Got A Feeling.” Then Big Mike sang Neil Young’s Buffalo Springfield chestnut “On the Way Home” and the Grateful Dead’s “Ripple,” accompanied by this writer on ukulele. After that I sang a Kinks and a Who song solo (bad programming – the lousy opening act is supposed to play first). Then Hanna Barbarians Blake Parish and Kris Luther joined Big Mike (on resonator guitar) for a couple of Rolling Stones songs – the trio’s Sunday night Stones cover gig was the last show Woodhull attended, the night before his death.

Woodhull’s cremated remains were placed in a replica of the Beatles’ Yellow Submarine, and his brother Bill told the assembled guests that “Mike [was] boarding his yellow submarine, about to depart on his magical mystery tour, with a little help from his friends.” Then Big Mike and Me and My Monkey returned to play their friend on his way with the obvious song selection. There wasn’t a dry eye in the house.

Woodhull and his wife had both been plagued by illnesses in recent years. An account has been established to help her with expenses. Anyone wishing to donate should make checks payable to BBVA Compass Bank, include “Mike Woodhull” in the Memo, and mail to: