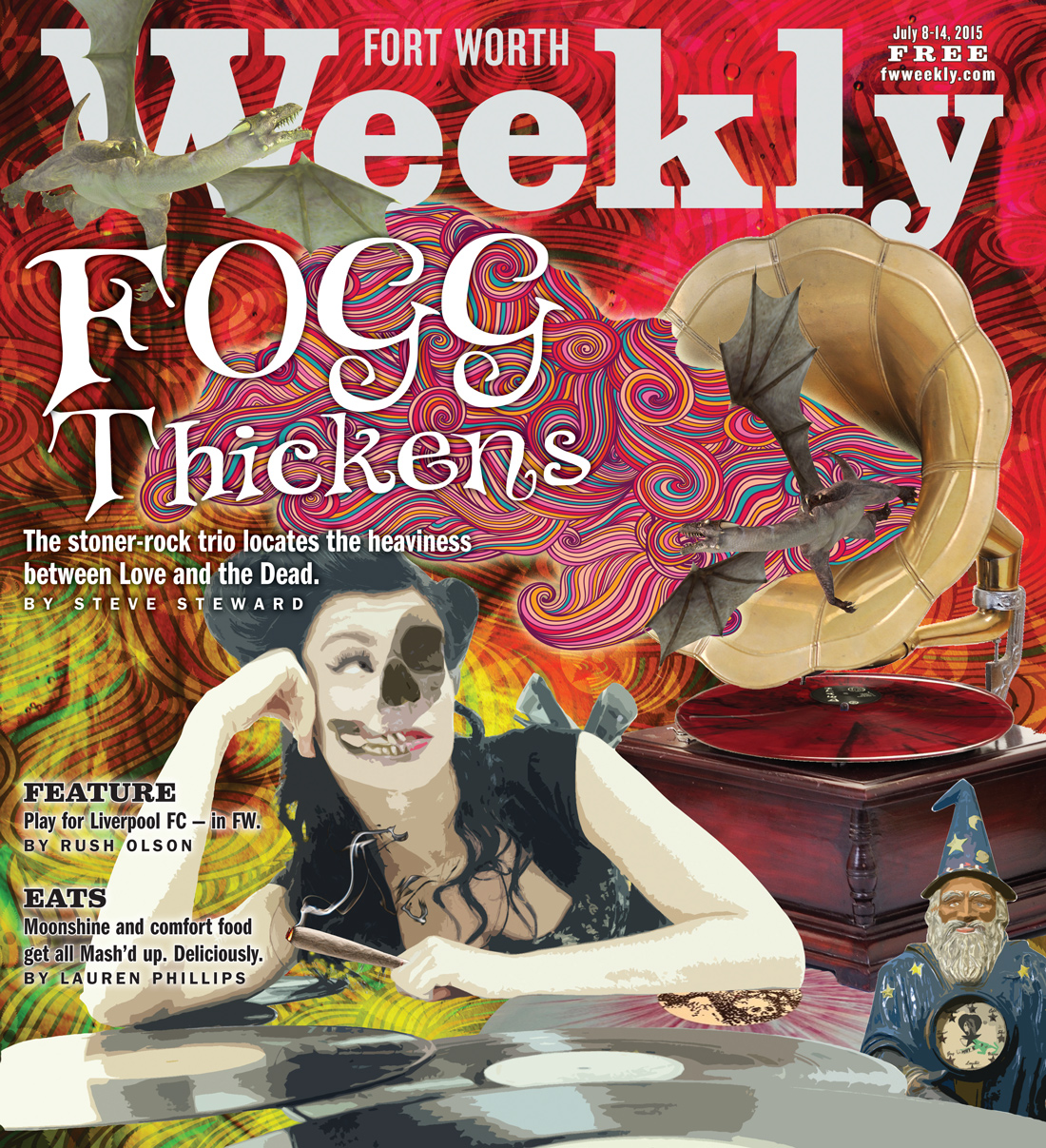 It’s amazing what can happen in two years for a band. Sometimes it’s a bunch of gigs around town that lead to more gigs around town. Other times, a band gets a record deal on a well-known indie label. You might be tempted to file that latter possibility into a dustbin along with other improbable circumstances like winning the lottery, but that’s actually kind of what happened for FOGG.

From videos and advertisements for C1RCA skateboards, FOGG’s tunes caught the ear of Dave Sweetapple, bassist for Sweet Apple, a critically acclaimed power-pop band notable for including both J Mascis from Dinosaur Jr. and Guided By Voices’ Bob Pollard in its recent membership. More importantly, Sweet Apple’s albums are distributed by famed New York stoner-rock label Tee Pee Records. By January, FOGG had drifted into the appropriate orbits and inked a deal for Tee Pee to put out their second record, the seven-song LP High Testament — a rock ’n’ roll fairy tale come true, made even more amazing by the fact that it was on the merits of their recordings alone.

“When we played the Tee Pee show at South by Southwest [months later], that was the first time any of those dudes saw us,” said FOGG drummer Ethan Lyons.

Recorded mostly live over a couple days in San Marcos by Ryan Lee (of Dallas stoner rock band Crypt Trypt), High Testament debuted on June 23, and anecdotally speaking, it’s quickly become a favorite among the local stoner and metalhead cognoscenti. The band’s bio on Tee Pee Records’ website describes the sound as “howling psychedelic metal and ’70s biker doom.” It’s not an inapt description, but it leaves out the nuances of beatific acoustic interludes that wouldn’t be out of place on a Dead Meadow album — or even one by ELO. That there is more than one Sabbath-cribbing, overdriven riff after another on their newest album suggests that High Testament may be a bridge between FOGG’s previous Pentagram homages and something that pushes the boundaries of what fans think stoner rock should be. In fact, the band is already evolving beyond its stylistic hallmarks — Jowell cites Love as a current influence that’s moved his interests away from doom metal. Bassist Brandon Hoffman is blunter.

“The new one … I don’t really like those songs anymore,” he said. “They’re nine months old. Our new stuff is definitely still heavy and very stony — the fuzz is still turned up all the way — but my whole trip now is exploring different sounds that can complement the heaviness so it’s not totally overbearing on a 10 song record. … The riff and the groove are still at the center of the band’s collective brain, but there’s these other peripheral ideas starting to creep in. We’re still a heavy band, just more of a Hendrixian proto-metal kind of attitude. And not doom.”

Yet part of the benefit to being part of Tee Pee roster is the attention of a built-in fanbase hungry for stereotypically Sabbath-oriented sonics and riffage, not to mention a particular image built on 1970s feel-good outlaw iconography like custom vans and denim kuttes.

“That scene is definitely a look and a sound,” Lyons said of the stoner rock scene that’s developed around labels like Tee Pee and Southern Lord.

Jowell agreed. “I don’t really identify with the macho, motorcycle stuff — dudes that have the patches of every single band on their jean vest. … We’ve met and become friends with a lot of cool people who are into that, but it’s hard to fake it when you’re onto other things, I guess.”

The scene is either Sleep or Sabbath, Hoffman said. “We haven’t even listened to Sabbath in a year.”

Jowell chuckled and said, “I think Grand Funk is probably the heaviest thing we’ve been into lately. I guess we’re going for heavy in a Jimi Hendrix way. We aren’t tuning down to B. … I think what happened for us … we started getting into The Band, Soft Machine … stuff that’s heavy in a different way than what we were used to. When you filter non-heavy bands through your own ideas of heaviness, it comes out its own thing.”

Lyons, who has recently become obsessed with Buddy Rich, is on board with the shift away from the plodding thud of doomy jams. “I think jazz drumming is the way you’re supposed to play drums,” he said. “It just feels better.”

Besides a dive into a different end of the classic rock pool, the band cites an expansion of their bills to include bands that aren’t typical, Sabbath-inspired stoner metal. “We got tired of bills where every band had this similar sound,” Jowell said.

Hoffman agreed. “Bills with a ‘theme’ kind of suck.”

He then said how his favorite shows of recent memory are ones FOGG has played with hardcore bands like Fort Worth’s Sin Motivo and Denton’s The Sentenced, in addition to a recent Chat Room lineup headlined by psych-surf punks Fungi Girls that had FOGG opening ahead of the Hall and Oates-ian Son of Stan. On Thursday night, FOGG will join Fungi Girls for the inaugural show at the 1912 Nite Club on Hemphill Street on the Near Southside.

If it sounds weird that a band with a new record out on a notable indie label would play a sketchy bar that looks like it has to scrape vagrants off its stoop, that’s kind of the reality of the music biz these days. Like most bands at their level, the guys in FOGG are aiming for a modest career that pays the bills. At the moment, Hoffman is gradually making his way through a history degree at UNT while working at a snow cone stand in White Settlement. Jowell recently started in the accessories department at the Guitar Center on Hulen Street, and Lyons works in the Dickies warehouse in Blue Mound. “It’s pretty much that and playing drums,” he said. “It would be way better if the band was it.”

Jowell knows they’re pretty fortunate, but he acknowledges that they have a lot to learn. “We’re not great at business. It’s our first serious band, and we’re figuring it all out. We’ve been fucked over a few times, so we’ve definitely learned some lessons.”

When asked if he thought a manager or booking agent would help the band reach that self-sustaining goal, Hoffman said it would require someone who was as committed to FOGG as he and his bandmates are.

“Basically, the ideal situation would be someone who cares about it almost to the point where it’s like he’s another member, but so far, we’ve been fine doing those [business] things ourselves. It’s limiting, sometimes, but we’re learning as we go.”