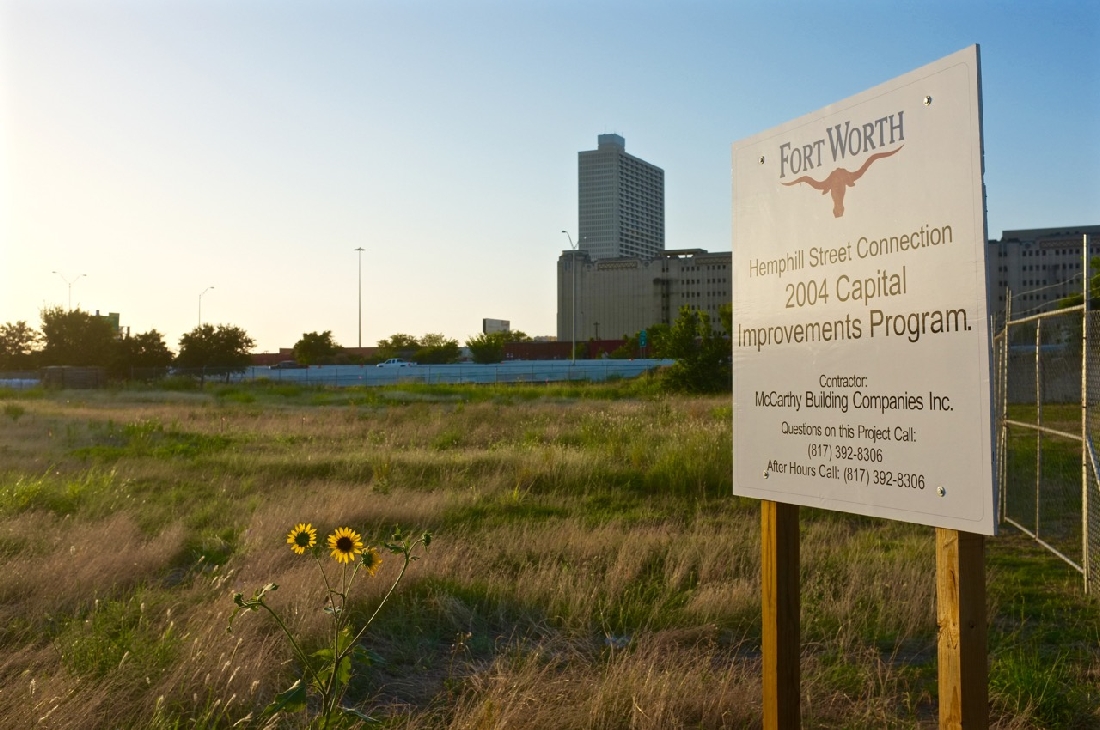 The Hemphill-Lamar Connector, a long-discussed tunnel between Hemphill and Lamar Streets that would add another link between the Near Southside and Downtown, has officially been underway since April. Though visible progress is hard to see at this point, it won’t be long before we start to notice work at the site. With the connector on the horizon, I feel it would be prudent to talk about the street it will be connecting to: Hemphill.

The name “Hemphill” has something of a connotation to longtime Fort Worth residents. It’s a street that has functioned as a physical and psychological barrier between neighborhoods and a depressing influence on nearby property. It’s wide and fast. Its narrow, treeless sidewalks bake in the sun, and as a result it’s not an especially pleasant place to spend time.

Near Southside leaders and neighborhood activists farther south have talked about their desire to make Hemphill into a better street for many years, and to spur re-investment in its many vacant lots and abandoned structures. There have been some efforts toward this goal, but progress has been slow in the few spots where it’s happened at all.

Looking at Hemphill on a map, its potential importance becomes obvious. It is a long, unbroken linkage that passes through the heart of the Near Southside, the Magnolia Avenue urban village, the as-yet unfulfilled promise of the Berry Street urban village, and several neighborhoods like Shaw Clarke, Ryan Place, Fairmount, and Worth Heights. It ties into a series of prominent east-west streets, from Seminary, Biddison, and Berry to Rosedale, Magnolia, Pennsylvania, and Vickery. Where it intersects built-up commercial centers, it could easily host similar development; where it adjoins the homes of neighborhoods, it could become a local “main street” to enhance them.

One of Hemphill’s problems that hurts this potential is its physical form. The aforementioned width, speed, inadequate sidewalks, and unappealing conditions depress the street’s potential revitalization and keep it in the holding pattern it’s in now. Development reacts to the form of transportation nearby, so it stands to reason that if we want to change the pattern of investment along the street, the street itself must change.

There have been some small moves toward this goal –– such as a recent project that would improve pedestrian infrastructure along the street for a small stretch on the blocks immediately north and south of Magnolia Avenue –– but the looming Hemphill-Lamar Connector offers an opportune time to start growing it into the place it could be.

Before the tunnel opens and unleashes a new wave of traffic, the time is right to start re-shaping Hemphill into a more humane, multi-modal street. Imagine a Hemphill that not only serves as a north-south backbone for car traffic, but for bikes and pedestrians, too, and one that keeps traffic at a safe pace and makes the street more appealing for the kinds of walkable, people-oriented development that Southside leaders and residents have been advocating for.

In the interest of budgeting smartly, it can start with the simplest of all infrastructure: paint. Now, before traffic picks up with the new tunnel, is the perfect time to re-stripe Hemphill to give it dedicated bike lanes and give all forms of traffic a safe place to be. Over time, as budgets allow, the street’s physical form can be re-shaped as well, with sidewalks widened, trees and lights installed, and better bus stops constructed. Hemphill could be a model for important arterial streets across Fort Worth, and such a makeover would both spur reinvestment along the street and remove some of the psychological barriers created by having a fast-moving, wide swath of pavement adjacent to neighborhoods.

If we do it before the new tunnel opens, we’d keep disruptions to a minimum and set expectations of what Hemphill will be from now on. The time is right to start making Hemphill the neighborhood-benefiting place we want it to be.