Talk about a dramatic plot twist –– the Lone Star Film Festival is less than four months away, and the organization that oversees the event is topsy-turvy. Most of the small staff at the Lone Star Film Society recently walked out, leaving the event with no movies or guests of honor currently selected. From the outside looking in, the future might look shakier than the final hour of Titanic. Nobody, however, is hurling himself into the swell just yet. The departing staff and board members left quietly and politely and without throwing stones. Interim director Chad Mathews says the ninth festival should be a great one.

Interviews with Mathews and current and former employees and board members offered little concrete explanation about the changeover. Perhaps the insiders worry that describing how the festival will change under the new leadership could be interpreted as criticism of the former staff.

The five-day festival is the signature event of the Lone Star Film Society, and it introduces films to local audiences and allows them to interact with the artists. The festival has grown steadily since its debut in 2007. Last year’s festival drew more than 60 filmmakers and screened about 40 films that might not have appeared locally otherwise.

You might read between the lines and think board chairman Johnny Langdon was concerned that the festival was getting too big and losing its Fort Worth identity. But it’s hard to say, since Langdon did not return phone calls requesting an interview.

Mathews said the festival should maintain a symbiotic relationship with its host community.

“My best festival experiences were in towns that embraced a film society and festival,” he said. “And then the town has something to offer that goes beyond the film.”

Mathews, who has directed the Hill Country Film Festival in Fredericksburg in recent years, praised Fort Worth’s active film community, its open-minded audiences, and the compatible infrastructure that make it easy for hundreds of people to gather for movies in a central location, Sundance Square. The TCU graduate wants to tie the event more closely to local organizations and community groups to broaden the festival’s appeal and audience. He mentioned aligning the festival with children’s hospitals, establishing film camps, and working with organizations such as the Boys and Girls Club of Greater Fort Worth.

“We’re going to try to showcase Fort Worth,” he said. “One of the big reasons I wanted to be a part of this organization is I love this town. Fort Worth is this perfect place for the arts and the film festival and the film society. If we can focus on showcasing how great Fort Worth is, all those other things will come into play. Filmmakers will really enjoy showing their films here and experiencing a part of Texas they might not have been aware of.”

The film society’s former executive director, Alec Jhangiani, along with former managing director, Ramtin Nikzad, did much to make the film festival what it is today, although Langdon is the primary financier. In the past few years, MovieMaker Magazine’s annual list of the 50 best film festivals has included the Lone Star. (There are about 5,000 festivals worldwide.) And films included in the local fest have gone on to earn more than 50 Academy Award nominations.

Jhangiani and Nikzad worked to connect the film society to the community by establishing a year-round repertory film series and a mentorship program for local filmmakers.

Jhangiani and Nikzad initiated the partnership with Boys and Girls Club a few years ago and were “expanding it,” Jhangiani said. “It’s true that we wanted to grow the festival. There’s no reason it couldn’t be one of the best in the country. … Fort Worth should have the best possible film festival. Period. Community engagement is a part of that, of course. That said, when people think of the Kimbell [Art Museum] or The Modern [Art Museum of Fort Worth], they first recognize the international relevance of the architecture, collections, and exhibitions. That is excellence in the arts, that is what Fort Worth is capable of, that is what we should always be striving toward.”

Jhangiani wouldn’t discuss details of his departure, other than to say his decision “developed over time.”

Some observers speculate that Jhangiani and Nikzad wanted to make the festival bigger and bolder, with more activities and sponsors, while Langdon wanted to keep things comfortable and simple.

Jhangiani said that he and Nikzad wanted “very much” to continue working with LSFS: “There was a difference of opinion on how best to ensure the sustainability and growth of the organization and its activities.”

After the split, neither side is looking back.

“I don’t know what this means for the future of the organization or the festival, but of course I am hoping only for the best,” Jhangiani said. “I have to assume the board of directors has a vision for the film society. As I am no longer involved, I do not know the details. It will reveal itself in time.”

Mathews has never overseen a festival as large as Fort Worth’s, but he’s hardly a rookie. He said he’s not sure what led to the turnover of staff. He’s looking forward, not backward.

“They’ve asked me to be a part of the organization for a short amount of time,” Mathews said. “If they’re happy with what we deliver, we can talk about whether we’re willing to work together” in the future.

First things first. The festival is in November. Mathews needs to find a staff. And line up some movies. And guests of honor.

“There’s a short list of options,” he said. “That’s being worked on right now.”

Longtime board member Tina Gorski was recently replaced, but she remains a staunch supporter.

“I’ve met [Mathews], and he seems like a really nice fellow,” she said. “It’s going to rock on. I think everybody is committed to keeping it going.”

Anger and divisiveness had nothing to do with the switchover, Gorski said.

“There wasn’t any big drama,” she said. “The guys that were running it were great guys, and they had all kinds of ideas, and the board had ideas. And they decided to go in different directions. It was peaceful.”

Mathews has another strong supporter. His former TCU film professor Richard Allen has served on the board of directors for a couple of years.

“I’m thrilled it’s” Mathews, he said. “I go way back with [him]. He was a student of mine, really active, and very involved when he was here in our department. It’s sad that we had to have the parting of the ways with [Jhangiani], but I’m glad it’s [Mathews].”

The turnover surprised Allen. Film society employees and board members seemed to be in agreement on most issues, he said. It makes sense that the employees would leave en masse, he said.

“They were very tight-knit and moved as a unit,” he said.

Mathews will be expected to carry on that tradition but also to help make it a warm, fun event, Allen said. The Hill Country Film Festival has a family feel to it, a sense of place, in large part because it reflects the friendly, open, and enthusiastic vibe of its director.

Mathews “may focus more on the local aspect,” Allen said. “As far as the professionalism and quality of films, it will be in the same place.”

In her five years as a board member, Gorski saw the community and the film festival feeding off each other and helping each other grow culturally. She wants to see that continue, no matter who is in charge.

“Fort Worth is a very open-minded place, and the Lone Star helped that,” she said. “They pushed the boundaries and brought in edgier films, and the audience responded. The new leadership has a good foundation to build on.” 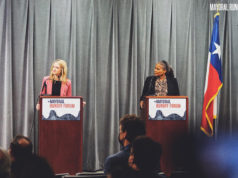