Bennett got out of the Army a year before me. He had joined out of high school and was deployed twice to Iraq. He operated multiple launch rocket systems that looked like 18-wheelers with 10-foot rocket launchers on the back. He holds the record for the most confirmed kills with his system. He was honored in Washington, D.C.

Bennett is a personal hero to me. Not because of how many people he killed but because of how many Americans he saved. Bennett was diagnosed with depression and severe PTSD during his second deployment. The Army doctors over-prescribed him pills and treated him with stress counseling.

On returning home, Bennett got married, had his first child, and he enrolled at Texas Wesleyan. Then his mother died from cancer, and he stopped taking his pills. He became depressed, and he shut down emotionally.

“I did not leave the house for weeks at a time,” Bennett said. His wife was unable to deal with his issues and soon divorced him, taking custody of their daughter. He was left with no family, no job, no advanced education, and severe PTSD.

Bennett’s situation is not unlike many other veterans suffering with PTSD.

There are currently 21.8 million U.S. armed forces veterans living in America. Many of them, or around 30 percent, are seeking medical marijuana as treatment for PTSD, according to Veteransformedicalmarijuana.org.

According to thefreethoughtproject.com, a hub for conversations about government accountability, early clinical research shows that medical marijuana is highly effective for treating PTSD, and it does not have the any dangerous side effects. Also, the FDA approved randomized controlled trials on cannabis and PTSD that will begin this summer.

In states where marijuana is legal, veterans can choose to treat their PTSD with marijuana. But self-medicating veterans living in non-legal states are defined as criminals and subject to harsh punishments. A Marine Corps veteran in Oklahoma who served three tours in Iraq and Afghanistan is facing a life sentence in prison for growing weed. Kristoffer Lewandowski is 100 percent disabled because of severe PTSD. The Department of Veterans Affairs had him taking up to 13 pills a day to treat his symptoms. After realizing the meds were killing his liver, Lewandowski decided that it would be a good idea to replace the pills with marijuana. He began by growing six plants for his personal use.

In June 2014, Lewandowski’s wife called the police after her husband had a severe PTSD episode, which frightened her enough to also take the kids to the neighbor’s house.

The police searched Lewandowski’s home. All of the plant matter together weighed less than one ounce. However, Oklahoma’s draconian laws say that growing marijuana is a felony cultivation charge, regardless of the weight.

Many believe the FDA’s summer study will spur increased acceptance of veterans using marijuana, a political shift that’s already led more and more states to add PTSD to their lists of conditions that qualify for medical marijuana.

“The truth is that marijuana can treat the whole spectrum of PTSD symptoms with this one medication,” said Dr. Suzanne A. Sisley, who is widely known for her research into potential medicinal uses of marijuana to treat veterans diagnosed with PTSD.

“Patients suffering with PTSD respond to stimuli that remind them of their initial trauma,” said Dr. Mechoulam, an Israeli scientist who studies the marijuana policy and the ethics of research with human subjects. He believes the effects of marijuana may have benefits for PTSD in addition to Alzheimer’s and Parkinson’s diseases.

“By aiding in memory extinction, marijuana could help patients reduce their association between stimuli and the traumatic situations in their past,” Mechoulam said.

Bennett said his main issue was lack of sleep.

“This was causing my anxiety issues and my depression to get worse,” he said.

A trip to a civilian therapist soon opened the possibility of using marijuana as a treatment.

“He recommended that I get to a green state, like Colorado, that offers medical marijuana for PTSD patients,” Bennett said.

Bennett moved to Colorado with the rest of the unit after his 2008 deployment. After he was discharged in 2010, he began smoking weed to help him relax. He smoked it reluctantly. However, he quickly realized his anxieties were reduced, and he felt happy for the first time in a long time. He began to smoke late at night after work. His behaviors began to change for the better. He found a job and new place to live. He used the marijuana to keep his PTSD under control. He was soon promoted and is now living happily. He also gets to see his daughter a lot.

“Smoking weed started helping when I came back from my second deployment,” Bennett said. “I was overmedicated and was unable to function. Marijuana helped me in ways that the pills couldn’t.”

It soon became apparent that my Army training was useless for civilian work. The medical field was no longer an option because of the PTSD. I had seen too much. Working dead-end jobs for crap pay kept me depressed. Working in hot factories and making parts on large, dangerous machines was a nightmare. There was no retirement plan and nowhere to go in the company. It was like being trapped for the rest of my life. It was time to take my butt back to school.

But first I had to get better mentally.

Medical marijuana was working for Bennett, so I figured it could do the same for me. In January 2014, Colorado legalized marijuana for recreational purposes. It was like God saying, “Smoke weed and cure yourself.” 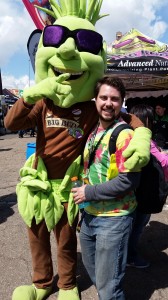 I traveled to Colorado during the first week of recreational weed sales. Being over 21 and having a Texas driver’s license gained me entry into my first dispensary. Though all of the dispensaries in Denver are amazing, the Kush Club was magical. It smelled of great marijuana buds, and everywhere I looked were smiling faces, from the staff to the customers. The bud-tenders helped me pick the best bud for my PTSD.

One bud-tender recommended Amnesia Caviar and OG4 for me. The buds looked, smelled, and tasted amazing. They glistened in the light. They smelled fruity and tasted sweet.

I felt safe in Denver. There were police patrolling the streets, but they weren’t looking for stoners.

Colorado is an incredible place. I will never forget the good feelings that came from buying pot legally. Every dispensary was clean, like a doctor’s office, and the atmosphere was warm and cozy. The weed calmed my nerves and allowed me to sleep like before the war.

Marijuana is a great treatment for PTSD.

NORML agrees. The National Organization to Reform Marijuana Laws has grown nationally since it was created in 1975. This group hopes to shift public opinion to legalize marijuana federally, advocating for adult access to marijuana for any purpose.

Larry Tally, retired Navy veteran and DFW NORML member, said Texans should support marijuana legislation and tax the sale, production, and distribution of marijuana like we have done with alcohol.

“It is about being free, because we are Americans, and we want to be free,” Tally said.

I started smoking weed as a kid. Taking my first hit off the pipe, inhaling the smoke, and changing my mind’s thinking frightened me the first time.

Some friends and I often climbed to the roof of Miller Elementary School in Arlington to smoke cigarettes or bad cigars we’d found left over in public ashtrays. But this one day during the summer of 1998 was different. My buddy Austin had “borrowed” some pot from his older brother. The sun was hot. We stared at the sky. We watched the clouds. And we got stoned.

We were smoking Mexican swag. It was brownish, seedy, and smelled like a dead skunk that had been lying in the street for a few days. We made our pipe out of a soda can.

“Take marijuana, and then you will want cocaine and heroin,” they said. “Once you start, you will never quit. You’ll become addicted.”

On the roof with my friends, D.A.R.E.’s words flew out of my mouth. “Drugs are bad,” I scolded my friends, “and they make you dumb.”

My friends laughed at me and took their hits. Feeling foolish, I bit my lip, grabbed the pipe, and inhaled deeply.

The smoke was harsh and thick, and it tasted like burned coffee beans. A tingle ran up my spine. The next few hits made me feel relaxed and giggly. The world seemed magical. The birds were singing symphonies and flowers smelled better than ever.

The rest of the summer was filed with aggressive in-line skating and smoking weed. My friends liked to hang out at Austin’s house because his parents were never home. His older brother and his friends, however, were home all the time. Soon we were getting high every day. We were like The Little Rascals on weed.

Having fun and feeling invincible, I was playing a dangerous game that I eventually lost. Pulled from school, stripped of friends, and treated like a prisoner by my own mother left me feeling depressed and angry.  My psychological addiction would advance and soon lead to harder drugs, sending me down a dark and dangerous path. But there’s no way that my mother or teachers or even I could have known that cannabis would one day become my savior.

While researching possible PTSD treatments, I discovered that the side effects tetrahydrocannabinol or THC include happiness, euphoria, and sleepiness. This was exactly what I needed.

College graduation is approaching, and I am looking toward a bright future. Although this means leaving Texas, I am confident that one day my home state will open the laws to commercial hemp and medical marijuana. When that magical day comes, I will return to North Texas with love in my heart and a huge sack of weed in my hand.