Trying to move past my Iraq war experiences left me with some strange, scary thoughts. Hopelessness. Never wanting to get off the couch. Thoughts of driving my car off a cliff. Everything seemed pointless, useless. I wanted to find a way to escape everything, especially my own thoughts.

I wanted to hit someone, particularly my ex-wife. We screamed at each other for little reason. Once we threw dishes at each other during an argument over how silverware should go in the dishwasher.

Luckily, I found a cure.

Now I am about to graduate Texas Wesleyan University, go to work, find hope. A career in social media marketing beckons. Life’s worth doing. Before long, I also hope to be a licensed river raft guide. Goals have been set, met, and surpassed.

Things are almost perfect. The problem is, my cure can cost me everything. I could be fired from my job, put in jail, become a felon, or worse.

Like thousands of other veterans, I have discovered that marijuana is better for treating Post-Traumatic Stress Disorder than prescription pills. And it’s maybe the best option out there. Pot can only be safer than pharmaceuticals in the long run.

But pot is also illegal in Texas and many other states. But for me, the risk is worth taking because without it, I’d be a short-fuse cannon on the verge of exploding.

Taking my father’s advice, I joined the Army in 2007 when I was 22. Smoking weed was never an option. If you fail a drug test in the service, you can lose rank, benefits, and freedom. The promise of an honorable discharge and its benefits motivated me to stay clean.

During my combat medic training at Fort Sam Houston, I got married. We were sent to 4th Infantry Division, 7-10 Cavalry at Fort Hood, in Killeen, Texas. Shortly after arriving, my unit was deployed to Iraq. My new wife was devastated and scared. My unit deployed to South Baghdad at Forward Operating Base Falcon in March 2008. Upon our arrival, my unit was escorted to its temporary quarters –– fabric tents surrounded by large concrete barriers. Around 3 a.m., I heard sounds like loud whistles buzzing just above my head. The top of the tents swayed as the incoming missiles just barely missed us but hit with a devastating force that blew my t-shirt back.

My comrades jumped out of bed in their underwear and grabbed their boots, helmets, and rifles: 30 guys squeezed into a 5-by-5-foot concrete bunker.

This was my first night in Iraq.

My medic duties took me to several different platoons while stationed in Iraq. I was placed with a mortar platoon and a tactical response platoon, and I even drove my company commander’s vehicle. As a medic, it was my job to take care of the injured, the bleeding, the dead. We were lucky not to have lost any friends, but death was everywhere and often. You woke up every day wondering, “Am I going to die today?” The odds were 50-50 every time you left your post. We would talk about returning home and getting out of the Army a lot. “What are you going to do when you get home?” became the most frequent topic.

Coming home was like a dream come true. At first, our mission was completed in March 2009. The feeling of relief was almost indescribable.

The days of pure joy didn’t last. I soon noticed a change in myself. I couldn’t shake the shadow of death that I’d picked up during my deployment. The feeling of constant danger was permanent now and left me not wanting to be around large groups. My temper got bad and my fuse short. My wife and I fought constantly, often over small issues, and we would have to separate to keep from getting physical.

After only four months, the Army consolidated the 4th ID to Fort Carson, in Colorado Springs, Colorado. It was beautiful there. My wife and I loved taking long hikes in the mountains with my dogs, and we tried to stay active. 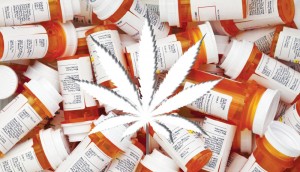 Although the scenery had changed, my anxieties were getting worse. The doctors identified my PTSD symptoms and offered me pills.

In 2009, the State of Colorado allowed medical marijuana use for PTSD. The Army said no way.

In 2009, Colorado Springs had nine dispensaries in the city. By 2010, there were more than 100. This industry boom first drew my attention to the medical marijuana industry. One year later, I was honorably discharged.

After returning to Texas, my wife and I got divorced. She did not want a pothead for a husband.