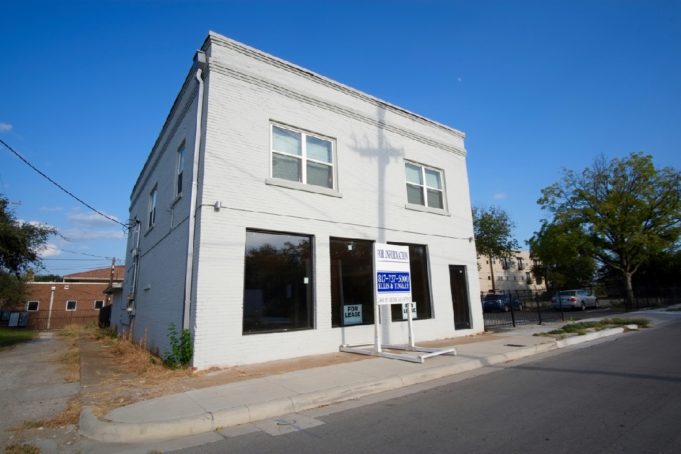 With Fort Worth’s track record of protecting historic buildings being, shall we say, inconsistent at best, it’s always nice to see one of those old survivors get a new lease on life. That’s exactly what’s happened to the unassuming building at 919 Alston Avenue in the Near Southside.

This small two-story building sat vacant and boarded up for as long as I can remember, and I half expected it to eventually get flattened by a new large apartment or medical development at some point. Happily, that’s not what has happened. Instead, the building has recently been restored.

The process of restoration has seen the building cleaned up, the storefront windows re-opened, and a fresh coat of paint has been slapped on the building. The ground floor is up for lease as a medical office, and the second floor houses two residential units.

This building is in a part of the Near Southside that sort of stays under the radar, when people talk about the hot and trendy parts of the district. The large swath of land between Rosedale Street on the south and Vickery Boulevard on the north has mainly been home to medical facilities of various sizes, but the number of vacant historic buildings and even greater number of barren, vacant lots has presented a lot of opportunity for new development to move in and create new neighborhoods. Thanks to the Near Southside’s forward-thinking zoning (often requiring residential components to any development) and progressive design codes (ensuring new projects put the pedestrian experience foremost in the design process), we’re seeing a lot of new construction and restoration projects that are adding some very cool spaces to the area and opening up more opportunities for new residents.

Over time, as the areas away from Magnolia Avenue add more residents, they’ll also add more commercial space, and we’re likely to see different sorts of characters emerge to differentiate the various sections of the Near Southside (like South Main Street’s gritty, industrial warehouse/factory vibe). It’s not hard to imagine a time in the future, when all of these vacant lots, historic buildings, and old commercial streets have been brought back to life, and there’s a place like Magnolia Avenue every five blocks or so between downtown and the Fairmount area, giving all the new residents places to walk to.

Buildings like 919 Alston Avenue help keep the fabric of a neighborhood interesting as it redevelops, ensuring that not everything is consumed by brand-new construction. Variety is important, and in an urban neighborhood there’s opportunities for it to occur block-by-block, and each individual lot at a time. It’s also a great example of how to re-use small buildings like this, rather than knock them down for new development, and can show developers in other areas of the city how to do the same.