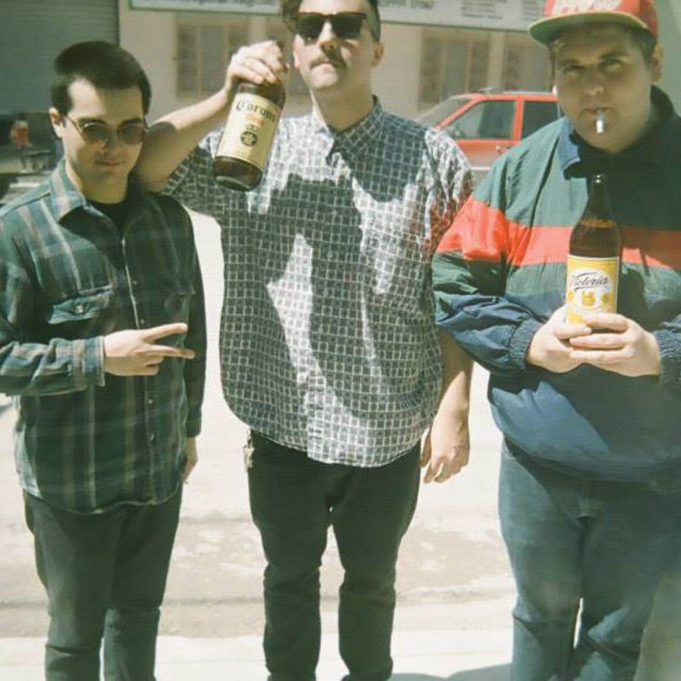 I’ll be honest. Interviewing a band by group text is sort of a bit, but seeing as how the three dudes in the Fungi Girls are only a few years out of high school, an interview via texts seems less like a clever conceit and more like a way people should do interviews more often. Hitting “send” is way easier than getting four schedules to convene at a somewhat distant location. Even with the miraculous humdrum of wireless mobile devices, I mostly got only Fungi Girls drummer Skyler Salinas, who was having a slow day manning the counter at Doc’s Records and Vintage. I asked him if he had sold anything cool. Apparently, his day was filled with “old folks buying oldies CDs.”

Salinas had his first cell phone when he was 11. I wondered if having a cell-phone starting at adolescence colored his creative vision at all, but Skyler doesn’t think so.

“The internet obviously has influenced us, just like any other young person living in 2015,” he said. “But texting is something that we do and don’t really think about.”

If you’ve ever seen Fungi Girls live, you’d get the idea that playing music is also something they do and don’t really think about, simply because they’ve been effortlessly bashing out their reverberating, shroomy take on psych rock for nearly a decade, jamming together before they could drive. In 2008, Salinas, bassist Derryk Barrera, and guitarist/vocalist Jacob Bruce debuted as the Fungi Girls, somehow emerging as fully-formed indie rock wunderkinds who garnered raving praise from media outfits like Pitchfork and even the notoriously finicky local media blog WeShotJR.

But as these things go, Fungi Girls have sort of drifted out of that critical orbit, though not for lack of output.

“We haven’t released anything super proper through a label with distro/press since [our debut full-length] Some Easy Magic in 2011, so I don’t think we’re on the radar like we used to be,” Salinas said. “The internet age moves fast. You have to constantly keep people’s interest.”

In his experience, it’s kind of impossible for a band in 2015 to be fully functioning without the internet. It’s a very present-day observation that seems at once obvious and prescient, but maybe that’s because Fungi Girls have always sort of been ahead of the curve.

It’s hard to identify where that kind of foresight comes from, though the band’s origins in Cleburne explain a little. When you don’t really like where you’re from, being outside can be an urgent motivator.

“Boredom, hatred, and general apathy for our hometown was a frequent topic in our old lyrics,” Salinas said. “I think today it still influences us, though indirectly, more so live than on recording.”

Some Easy Magic is full of these tropes, all of them bathed in Bruce’s reverb-washed voice, the lyrics riding a wave of surf-inspired guitar leads that trail into the stratosphere like a Mylar balloon, powered by a rhythm team tighter than a waterproof Rolex.

And yet, over the course of the band’s seven years, the Girls’ sound has noticeably evolved. Their last release, a self-released tape-only full-length called Place Unknown features songs recorded between 2012 and 2013 that subtly reflected a period when they were into ’70s hard rock.

“We were listening to a lot Sabbath and Blue Cheer, and I can maybe hear it in a couple tracks, but obviously we’re not a metal band, so it’s not a very obvious thing,” Salinas said. “I think even though we have changed our sound up a few different times, we’ve always managed to make it sound like us still. Our newest stuff that we’re recording is pretty damn different from anything from the past, but I still think it’s familiar in a way.”

Salinas cited a broad sonic sampler as influences on the band’s new material.

“Reggae, rap, hardcore, dream pop, house music, Grateful Dead –– I’d rather not disclose our biggest influences for it because we’d like the change in sound to be a surprise, and it’d be cool if people guessed ’em,” he said. “It’s not psych/garage. I’ll say that.”

Moreover, they’re a band that’s nearly universally liked by a wide swath of music fans. To kick off their summer tour in June this year, Fungi Girls played the first show at 1912 Club, a Chicano bar on Hemphill that’s been hosting shows ever since (including more Fungi appearances), booked by local drummer Grant Baird and defined by a willingness to cross genres, which suits Fungi Girls handily.

“We hang with the Dreamy Life crowd, the punk/hardcore kids, noise and techno dudes,” Salinas said. “Obviously, not all bands work together on a bill, but I think us and Grant realize the importance of diversity and stepping outside of your comfort zone or scene.”

Place Unknown has yet to see a proper release. Currently, the record is queued in the nebulous limbo of the now-always-busy vinyl printing process, eventually to be pressed by Los Angeles-based Gnar Tapes, with a release date potentially in the spring. As for their newest material, Salinas said they aren’t yet sure how they’ll be packaging it, but it’s clear the band is amped about their change in course.

In the meantime, the band has on its long-term wish list a trip to Europe, once the logistics and means are adequately sorted out. But beyond that, Fungi Girls keep it pretty simple.