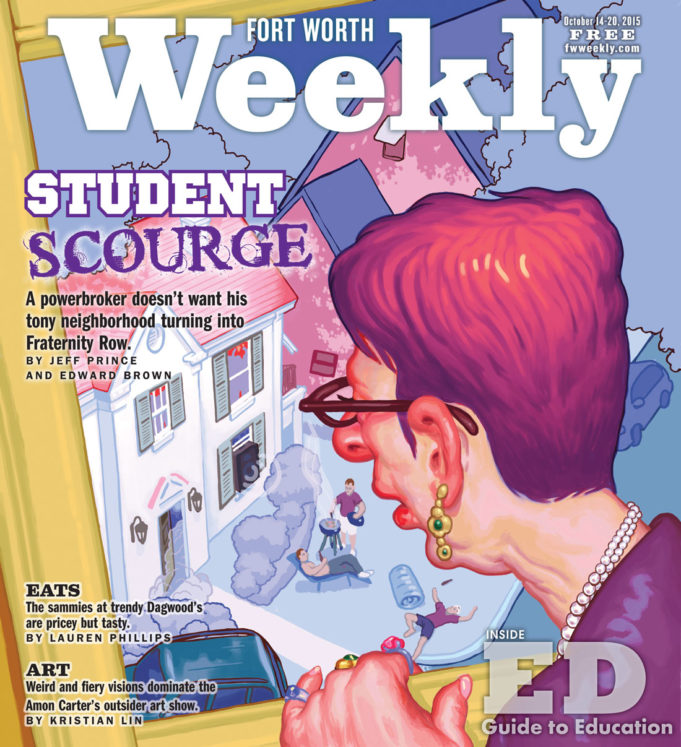 The couple sitting in the front row of City Hall looked more than a little pissed off. Talk about body language. Stephen Buttram had his arms folded, head cocked, and eyes narrowed. His wife’s arms were also folded. Ansley Buttram swiveled around to avoid having to look at their adversary, the short, immaculately dressed man speaking at the podium –– political consultant Bryan Eppstein.

The Buttrams accuse him of trying to push them out of an exclusive neighborhood just west of Texas Christian University’s Amon G. Carter Stadium. The Buttrams say they’ve been on the receiving end of a long campaign of harassment. Eppstein, Stephen said, is “doing anything he can to try and force us to sell our house, and the reality is we’re just not going to do it.”

The two camps were squaring off before the Board of Adjustment, whose members hear cases when building officials have been accused of making a mistake in a decision while enforcing ordinances. Eppstein said the Buttrams have allowed their house to be turned into a boarding house at best, a frat house at worst, and a nuisance to neighbors no matter what it’s called. Taking up his case before the board is just one of many avenues he’s pursued over the past two years, resulting in a swell of e-mails, phone calls, meetings, disputes, a decision, an appeal, a postponement, and on and on.

Eppstein is representing neighbors along Alton Road. The three-lined street is not only close to TCU and the Trinity River but just a few miles from I-30 and downtown. Houses are in the $1 million range. Yards are groomed. Old-growth trees provide beauty and shade. The street is narrow, however, and gets congested when cars park alongside both curbs. The front lawns are lush but don’t have sidewalks. Congestion creates safety hazards for motorists and pedestrians.

The Buttrams own a five-bedroom Colonial-style house in the 2800 block of Alton Road. The home’s exterior is nice –– except for the half-dozen missing or broken tiles on the front porch, testament to the large amount of foot traffic.

For the past couple of years, the Buttrams have leased their home to five TCU students at a time. The first bunch was rowdy, playing loud music, hosting parties, littering, parking on both sides of the street, and upsetting the nearby homeowners.

Who could blame the neighbors for gritting their teeth? Own a million-dollar home in a fashionable area, and you don’t expect a bunch of fraternity students living next door.

Eppstein lives a block away, but his neighbors chose him to lead the fight. Few people know city hall better than he does. The professional strategist and lobbyist has spent three decades pulling the strings of power. Some of his biggest clients are police and fire unions, local, state and national politicians, and lobbies for clients such as Verizon Communications and the Texas Medical Association.

Few people keep a lower public profile doing this than Eppstein. Usually he’s content to run the show from behind the wizard’s curtain. Now with this Alton Road dispute, he’s gone from peeking through the curtain to practically bursting out in his birthday suit. And it hasn’t been pretty.

“His irritation level may have reached the point where he says, ‘If it’s the last thing I do, I will see that you are kicked out of here,’ along with a dose of ‘Do you know who I am?!’ ” said a local developer who requested anonymity for fear of offending Eppstein. “Taking this issue to these extremes seems shortsighted and out of character.”