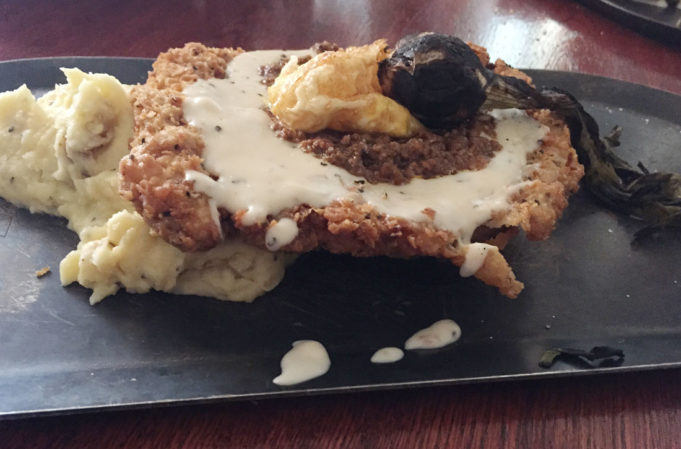 When sports writers use the word “enigmatic” to describe an athlete, that’s usually code for someone who had the world by the cajones but continually, inexplicably made career-damaging mistakes.

I’ve heard that word used a lot to describe Grady Spears, who became the city’s first real celebrachef back in the ’90s during his long, successful run as head honcho at Reata Fort Worth. His professional life after that celebrated stint at the downtown eatery has, dare I say, been enigmatic.

It’s almost impossible to write about the man without discussing his many failures. Fort Worth Weekly’s Jeff Prince wrote a cover story (“Grady Spears’ Last Shot?,” May 27, 2015) expounding on a number of his here-today-gone-tomorrow restaurant ventures, pissed-off former business partners, and angry associates. Almost everyone in Prince’s story, with the notable exception of  Chef Lou Lambert, conceded that for all of his personal and professional calamities, the guy is an excellent chef. I’m not sure I agree.

I don’t think he’s bad, but I’ve always found Spears’ haute cowboy style a little too gimmicky and simplistic. His most recent failed venture in Fort Worth, Grady’s Restaurant, had a good-not-great menu of upscale comfort food –– bacon-wrapped this, chicken-fried that, grits and grits for days. After the place closed, he went on to open Grady’s Line Camp in Tolar. It served the same schmaltzy fancy cowboy cuisine –– which, to his credit, he made popular years earlier. But it felt like a one-hit wonder trying to recapture past glory –– the Chubby Checker of local chefs.

Spears’ new restaurant, Horseshoe Hill Café (204 W. Exchange Ave., 817-882-6405), sounded like more of the same style. If Chubby Checker were to sing a song about the eatery, it would be called “Let’s Chicken-Fry Again.”

Kidding aside, the chicken-fried steak-focused menu at Spears’ Stockyards café may not be worthy of three Michelin stars, but the food fits the setting. If you can forget the chef’s starry, sordid past and simply judge the restaurant on its own merits, there’s a lot to like.

The place has a laidback, unpretentious vibe. The interior looks like the kind of West Texas roadside gem you’d stop at for a quick lunch on your way to somewhere more glamorous. On a recent weekday visit, the tiny, multilevel dining room was packed with mostly men in starched blue jeans and boots. It’s like Spears went to Central Casting and hired extras to help him set the scene.

The menu behind the walkup counter was written in chalk and featured several varieties of battered meats, breads and spreads, and a couple other gussied-up versions of Tex-Mex classics.

My guest and I started with cornbread and housemade orange jam ($6), which tasted like a hearty breakfast. The fresh-tasting jam wasn’t cloying at all, and the cornbread had crisp edges as though it had been cooked over an open flame.

Since the eatery bills itself as a chicken-fried steak joint, we thought it only fair to judge the kitchen on its signature dishes. Though both of the steaks we enjoyed were well-portioned, tender, and delicious, the prices verged on horse thievery. The Cowboy Way ($17) steak was thinly battered and slathered in a peppery gravy, and it was topped with a whole fried egg that looked like a deflated balloon. The goliath sat atop a hillock of fresh-tasting mashed potatoes. The Farmer’s Way ($18) had the same preparation but also came with a spicy salsa that the menu calls “chile gravy.” The egg didn’t add much to the dishes, but the cream gravy, crisp batter, and rich mashed potatoes made for a warm, comforting, and filling combination.

Even if Fort Worth’s first cowboy chef isn’t taking many chances on the menu, at least he gets another chance to have his name on a restaurant. And maybe that’s risky enough.