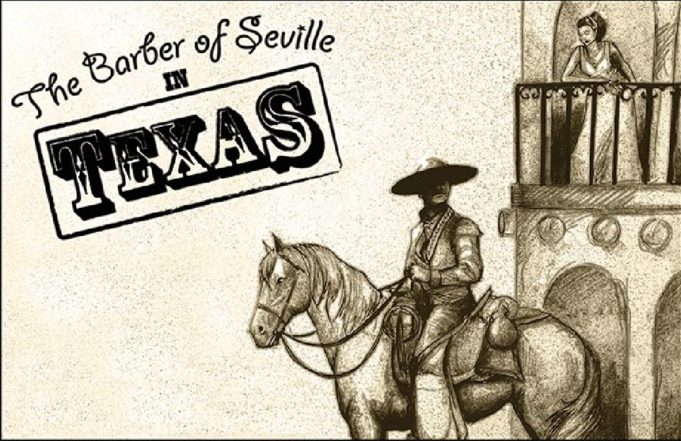 At first glance, Rose Marine Theater seems like an odd venue choice for performing Gioachino Rossini’s The Barber of Seville. The historic Northside performance hall is best known for a near-century of hosting Hispanic speakers, artists, and Latino cinema. Plus, the area around the theater has a bigger reputation for bustling taquerias and Tejano dance clubs than high opera.

But Fort Worth Opera staff did their homework. After several months of consulting with Latino community leaders, the opera company settled on a bilingual adaptation of the bel canto classic that premieres this weekend.

The revised operetta is 50 minutes in length and places familiar characters Rosina (mezzo-soprano Anna Laurenzo), Almaviva (tenor Brian Wallin), Aunt Bartolo (soprano Maren Weinberger), and Figaro (baritone Trevor Martin) in 19th-century West Texas. Whereas Rossini’s version was conceived in Italian, the FWO production will alternate between English and Spanish. And, the star-crossed lovers now have a language barrier to overcome. Rosina only speaks Spanish while Almaviva only knows his native English. Figaro must use his bilingual abilities to translate flirtatious messages between the two before Aunt Bartolo marries off her niece Rosina to an older, wealthier man.

The re-envisioned Figaro is now more responsive to Fort Worth’s changing demographics, said Estela Martinez-Stuart, an advisor on the project. The bilingual aspect of the work reflects everyday experiences for many Latinos. As a native of Mexico and current tourism director for Fort Worth Convention and Visitors Bureau, she knows what it’s like to jump between her first language and English hundreds of times a day.

She said the response from the Hispanic community towards the opera has been overwhelmingly positive. Rather than impose a top-down production on Fort Worth’s Latin community, FWO staff have consulted closely with her and other leaders to ensure the production meets the needs of the Northside community.

“As a genre, opera is a natural fit for the Hispanic community,” she said. “If you watch Latin soap operas you see many of the strong emotions and colorful characters that you find on stage with opera. Latinos are very passionate people.”

Hannah Guinn, FWO managing director, said the new venture began early this year when frequent FWO festival performer and baritone Michael Mayes pitched the idea to her after seeing the original concept produced by Portland Opera. Guinn reached out to Kristine McIntyre, whose mixed English and Spanish version of Barber of Seville seemed perfect for Fort Worth audiences.

Guinn said several tweaks had to be made before it was ready for Cowtown. The setting for the program was changed to West Texas to appeal to natives here, and new cowboy-themed costumes were created. Also, the educational show needed to be updated with terms and historical references that fit Fort Worth school district requirements. The student enrichment nonprofit Imagination Fort Worth helped ensure public schools were interested and willing to see the show. Two morning shows are already booked for Fort Worth school district students the weekend of the premiere.

Developing an ongoing relationship with the Latino community has long been in the works, said FWO general director Darren Woods. That effort began bearing fruits with the 2014 production of With Blood, With Ink.

“With Blood, With Ink showed our staff how natural partnerships can come together so easily,” he said. “We immediately began an internal dialogue to see how we can make wonderful partnerships and deep relationships with this community. The Barber of Seville in Texas is just the beginning.”

The Barber of Seville in Texas