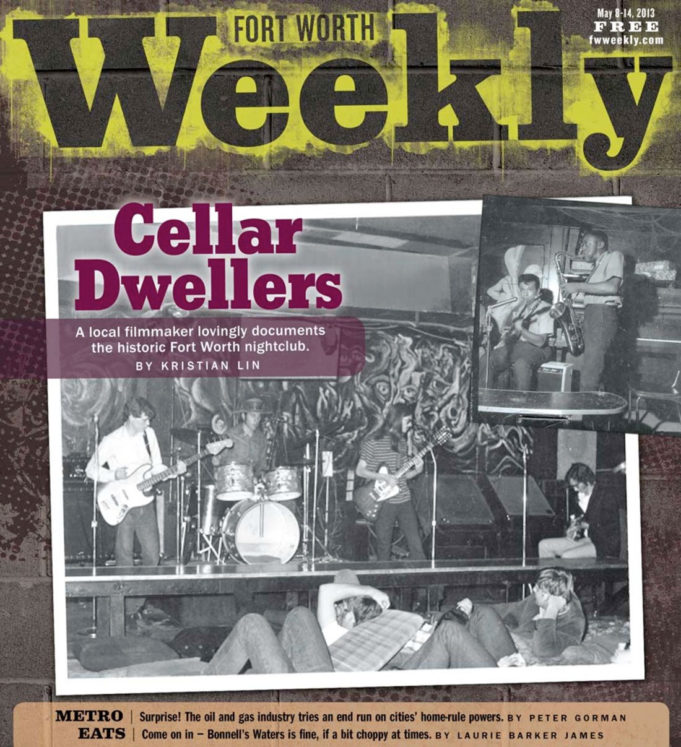 How old was the Cellar? Because when I first went to it in the fall of 1999 (the semester at TCU when I was newly 21), I’m pretty sure it was still called the Hi-Hat. I had only been in Fort Worth for a few years prior to that first visit, and I have no idea what it was before it was the Hi-Hat. I presume the bar has existed under a longer succession of names, but seeing as how its very recent closure happened with such short notice, I simply haven’t had time to dig up more of its history.

Oh, by the way, did you know the Cellar closed for good on Saturday? I’d guess the answer to that question is “yes” (because Facebook), but if you ignored social media over the past week, the storied Berry Street dive bar shut its doors for the last time as Halloween came to an end. What will become of the building is subject to conjecture, but if I were to ask a Magic 8 Ball about it, I suspect that all signs would point to “New TCU parking lot.”

What essentially happened was this: The building, which was also home to the long-defunct Stay Wired Coffee shop, was purchased by an LLC last year. No big deal, except that the new owners went through the bar and made a list of must-do repairs –– replacing 70-year-old tile, raising the ceiling in the Cellar’s downstairs bar –– that were impossibly expensive to fix. Along with the mandated upgrades came the threat of monthly inspections and fines. The short of it is that, one way or another, the business was gonna be out, and whatever long-term Berry Street/TCU development scheme would be in and free to continue changing the neighborhood. If another pizza place pops up in its place, I might find myself questioning reality, because it’ll make me feel like the lot of us are the clueless butts of some Truman Show-esque joke.

Unfortunately, the joke isn’t funny for the people who worked there, suddenly having their employment yanked out from under their feet. The staff were notified on Wednesday, and according to bartender Chris Harris, the building’s owners wanted to shut the doors that day, though Cellar owner Max put his foot down enough to keep the bar open through Saturday night. As one might imagine, the bar’s last five nights broke both sales records and hearts. “Our karaoke night on Thursday was the biggest one we ever had,” said Harris. “But man, I kinda teared up a little after it was all over.”

Personally, I didn’t cry over the Cellar’s ultimate fate, because my TCU-neighborhood haunts of choice were the University Pub and the Oui Lounge (RIP) in my 20s and the Moon Bar in my 30s  –– my face leaked more than a bit over that one. But that’s not to say I didn’t spend plenty of nights guzzling macrobrews and trying to get good at shuffleboard. Looking back, I’d say the Cellar was probably the staging ground for some of the most awesomely terrible nights of my adult life. If I’d had one of those days where the only way I could feel marginally good about life was by reveling in making stupid decisions that night, I’d make a beeline for the Cellar, where the vintage vibe, low lighting, and grimy linoleum basically invited me to leap, liver-first, into soul-walloping mistakes. One of those nights started with singing Huey Lewis songs with my buds at the Cellar’s karaoke night and ended with my then-girlfriend chucking my keys at my face and telling me to find my own ride home if I was so fucking smart, and peeling off into the night for emphasis. Wish I remember what we were arguing about! I bet it was hilarious.

That the Cellar would inspire me to make my girlfriend super mad at me isn’t really its fault. I guess the bar’s atmosphere was preternaturally suited for amplifying whatever trouble-getting-into instincts a given person was feeling on a given night. But lots of bars offer that service. I guess what really gives me frowny face about the Cellar’s ultimate fate is that there is one fewer scuzzy spot near TCU’s campus –– another lovable blemish scrubbed away in the name of neighborhood improvement and/or campus expansion. Whatever its future is, at least the Cellar’s history will live on in the smoke-choked memories of a lot of people.