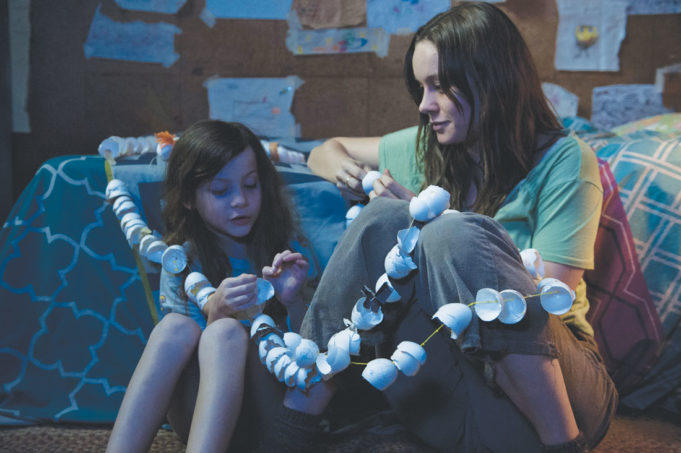 Brie Larson has been around. You probably saw her as Amy Schumer’s sister in Trainwreck or as the token girl in the movie version of 21 Jump Street. Fine as her performances in those comedies are, they don’t hint at the extraordinary resources that this 26-year-old actress possesses. Ten years ago, she was seriously trying for the music career that Taylor Swift wound up having, but instead this unremarkable-looking performer has developed into a fearsome dramatic presence. She stomped around forbiddingly as a rock star in Scott Pilgrim vs. the World, and she underplayed to miraculous comic effect as a texting-obsessed sister in Don Jon. Her performance as a damaged, determined social worker in Short Term 12 should have won her the Oscar that year. (Not a nomination, the trophy that went to Cate Blanchett.) If you’re still smoldering about that last one like me, you can take comfort in knowing that she’s more likely to win such recognition for Room, which is the year’s best prison movie, among many other things.

She plays the mother to a 5-year-old son named Jack (Jacob Tremblay), whom she lives with in an 11-by-11-foot gardening shed with a locking door, a skylight, a TV, and some rudimentary furniture. To Jack, the shed that he simply calls “Room” is the entire world, because Ma hasn’t told him that a rapist and kidnapper whom she calls Old Nick (Sean Bridgers) has imprisoned her there for the last seven years. However, now that Jack is old enough, she has a plan to use his help to spring them.

The Irish author Emma Donoghue adapted the screenplay from her own novel, though unlike the book, the movie gives us Ma’s proper name. As with the source, she does a remarkable job of telling this story from Jack’s point of view, as he struggles to wrap his head around the idea that there might be things and people outside Room. Her work is complemented by director and fellow Irishman Lenny Abrahamson, who previously helmed the uneven but wackily inspired black comedy Frank. He goes about his work unspectacularly, eschewing flourishes in Room’s cramped space while capturing the slow, monotonous flow of time in captivity.

I’m not spoiling anything by revealing that Ma and Jack escape halfway through, with Abrahamson using a variety of techniques to convey the sensory overload that Jack feels on his first exposure to the outside world. Somehow the action becomes more stressful once they’re free, as the shock of readjusting to society and the media attention that comes with surviving such an ordeal only worsen Ma’s periodic fits of depression. “I don’t know what’s wrong with me!” she sobs after lashing out at people. “I was supposed to be happy!”

Abrahamson and Donoghue conjure a wounding scene at a dinner table when everyone realizes that Jack’s grandpa (William H. Macy) can’t bring himself to look at the boy. Moments like this are balanced out by the sweetness of Jack’s interactions with his grandma (an excellent Joan Allen) and her boyfriend (Tom McCamus), who cagily draws out a little boy who spends his first days in their house instinctively hiding from other people.

Tremblay, who was actually 8 when the film was shot, holds up well in a demanding role. This movie doesn’t work without Larson, though. She brings great warmth and kindness to the showy part of a mother who’s continually on the verge of snapping both inside Room and out of it. Those qualities are what makes it so heartbreaking early on when she tries to convince Jack that the world outside exists, maintaining a calm face while her eyes pool with frantic desperation as the boy screams that she’s lying. Later, too, after an initial escape attempt fails, she waits until Jack falls asleep before she lets the despair come rushing in and covers her mouth so her son won’t hear her.

The deeply moving bit when Jack offers to cut his back-length hair so his Ma can borrow his strength encapsulates where this movie’s heart lies. It’s the love that these two have for each other that keeps Ma anchored in the world when everything else seems lost. For all they’ve been through together, Ma and Jack aren’t so different from other mothers and sons. Showing that is perhaps the uncanniest achievement of this uncanny film.