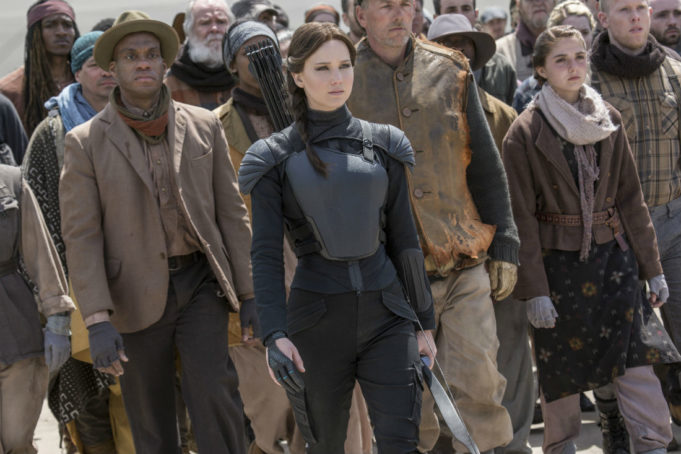 We come to the end of the Hunger Games saga with The Hunger Games: Mockingjay Part 2. The last book of Suzanne Collins’ trilogy is generally considered to be the weakest, so I was interested to see how or if the filmmakers would deal with it. Well, they’ve fixed some of the book’s issues, only to replace them with new ones. Like the first part of Mockingjay, the second doesn’t stand up on its own, and if you smashed the two halves together, I don’t think it would work that much better. Still, like a great many people, I was invested enough in these characters to follow them to their end, and it made me reflect on this series’ legacy.

Picking up where we left off, with the rebels set to launch a big offensive against the Capitol to topple President Snow (Donald Sutherland), Katniss (Jennifer Lawrence) goes off on her own because she wants to take down the murderous bastard herself. She’s not exactly alone, accompanied by Gale Hawthorne (Liam Hemsworth), the military commander (Mahershala Ali) who took her in in the previous movie, the documentary crew headed up by Cressida (Natalie Dormer), and the newly freed Peeta (Josh Hutcherson), who’s a wreck and in no real shape to fight, but has been placed with their unit on the orders of rebel leader Alma Coin (Julianne Moore).

Back when I reviewed the very first chapter, I noted all the elements of Collins’ original that the film had left out. Three films later, pretty much none of those things has improved. The novels’ satire about how these teens’ behavior changes because they’re aware of the cameras on them has gone just about untouched. As the books’ narrator, Katniss is an eagle-eyed observer who tells you about what people are eating or wearing, what the mood of a room is, whether the place that she’s in is hot or humid or stuffy or dry. The movies have never captured that tactile sense of her surroundings, nor have they ever looked all that good. (Oh, what Guillermo Del Toro could have done with this series!) The demonic ingenuity with which Collins kills off her characters is mostly gone, too, a casualty of the films’ PG-13 ratings. Like the books, the movies have addressed PTSD as a subject, with both Katniss and Peeta permanently scarred from their experiences in the arena — Hutcherson does pretty well depicting Peeta’s combat fatigue in this last chapter. However, the movies go no further than observing the behavior from the outside, instead of making us feel what PTSD is like. Specific to this movie, Katniss’ journey through enemy territory feels more streamlined than it did in the book, but the narrative still stops dead for tedious discussions of how she feels toward Peeta and Gale.

On the plus side, director Francis Lawrence does fairly well by a sequence where our heroes flee a booby-trapped train station. This last chapter also rather brings home how many tough women there are around Katniss. Jena Malone, with a shaven head and a hard-bitten attitude to match here, continues to fascinate me as a former Hunger Games victor who palpably dislikes Katniss but fights on her side anyway. Patina Miller is a rousing presence as a military commander who rallies the rebel troops, while Michelle Forbes goes atypically and memorably grungy as a hardass soldier in charge of Katniss’ unit. Gwendoline Christie comes on for one scene, too, as a local rebel leader. With all this, I can almost overlook Julianne Moore’s Coin not being much of a match for Katniss.

Still, what this series will be remembered for is cementing Jennifer Lawrence as a star. She has never half-assed her work in this popcorn franchise, and it only takes a few minutes into this last installment for her to remind us of her awesomeness — when a government loyalist disguised as a refugee grabs Katniss and puts a gun to her face, she just dares him to pull the trigger in a low voice, and you believe her when she says she’s tired of fighting. The carnage in this movie is on a far larger scale than in the previous three, and witnessing it all seems to shake Katniss still deeper than she’s already been rocked. There’s also a scene late in the film that lets Katniss mourn after someone close to her is killed. It was notably missing from the novel, and Lawrence is predictably great in it, too.

Compare her work with the other girl-centric blockbusters. The Twilight series had a great actress giving terrible performances, while the Divergent series has a very good actress giving mediocre performances. The Hunger Games series has a great actress giving great performances, and not only does Lawrence’s work lift this series above the other two, it holds together a tetralogy of films that would have fallen apart without her. That’s some kind of power right there. In fact, if you wiped away all of Lawrence’s movies except these ones, I’d still consider her a great actress. She has done better films than the Hunger Games ones and will almost certainly continue to do so, but in Katniss Everdeen she has created a heroine who has resonated with a wide public. That’s a special achievement, and she can be very proud of it.