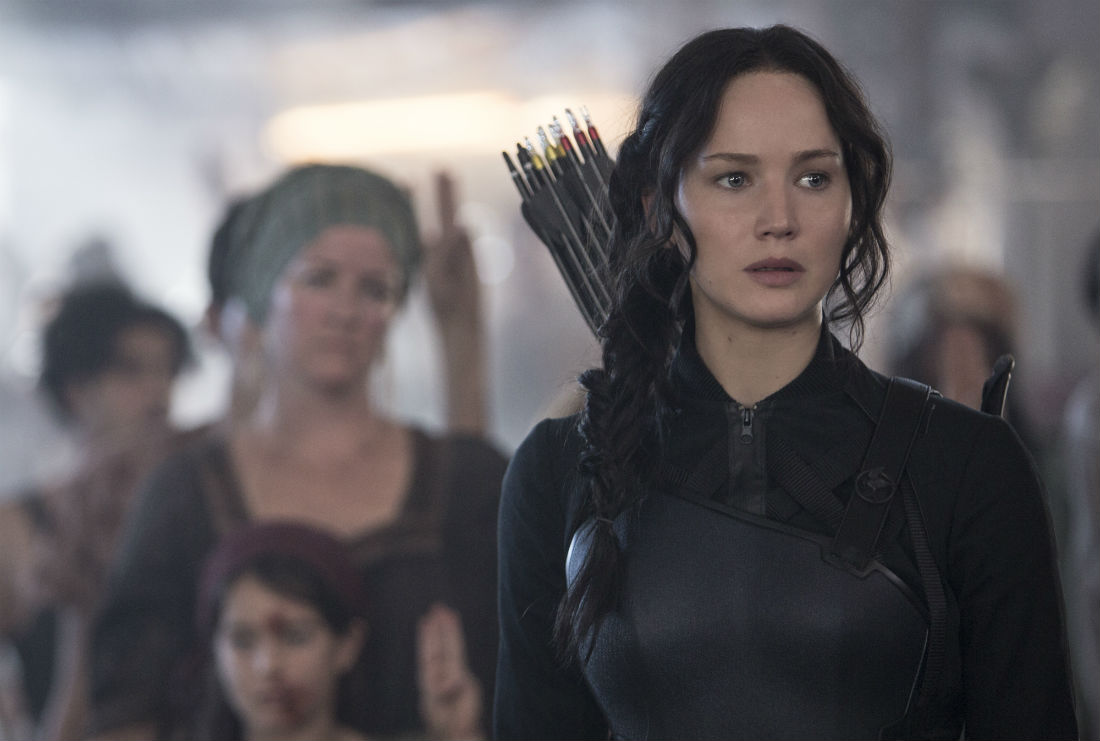 Here I find myself in the same position I was in with the seventh Harry Potter movie. Like that next-to-last film in a series, The Hunger Games: Mockingjay Part I isn’t really meant to stand up on its own, so when I say there’s problems with the pacing early on in this movie, or that I find Jennifer Lawrence subdued here compared with the previous two movies, those things matter less than they would in a stand-alone film. Mockingjay I is just meant to set us up for the big finale, and it does a fine job of that.

The plot of this installment mostly concerns Katniss (Lawrence) as she’s been taken into the custody of the anti-government resistance in District 13. Peeta Mellark (Josh Hutcherson) and a few other Hunger Games winners are in the hands of the Capitol, and Peeta is being used as a mouthpiece for the government, telling the rebels to lay down their arms. Since the rebels want to use Katniss as a rallying point for the movement to overthrow the government, she uses her leverage to demand that they rescue Peeta.

This film is written by Peter Craig and Danny Strong, who are the third set of writers to tackle this series. One thing I like about the film series is that it continues to leave Katniss’ point of view. Unlike the novels, this movie shows us Effie Trinket (Elizabeth Banks) bearing up in exile without her wigs and makeup. We also get more on the rebels’ president Alma Coin (Julianne Moore). She’s something of a dim figure in the books, but here she comes off as a leader who doesn’t have much in the way of natural charisma — her rallying speeches always have a stilted quality — but who wins followers because she’s a crack military tactician who keeps her head when chaos unfolds around her. We see that in a sequence when the Capitol launches a surprise bombing attack on District 13’s headquarters, and Coin figures out that she needs to bunker down rather than take on the attackers. The scene is pretty much all Moore, though it also reveals that Plutarch Heavensbee (Philip Seymour Hoffman, to whose memory this film is dedicated), whom we saw in Catching Fire as a smooth political operative, turns out to be something of a weenie when there are bombs falling around him. These additions act as supplements to Suzanne Collins’ novels and broaden our understanding of the world of Panem.

I do think director Francis Lawrence botches the climactic sequence intercutting between the soldiers going in to rescue Peeta and a dirt-spilling rebel broadcast jamming the Capitol’s communications. The movie also has only one truly rousing moment, when Katniss sees the Capitol bombing a hospital in District 8 and turns to the cameras around her to issue a defiant statement to President Snow (Donald Sutherland). Having been shunted to the periphery in the last two movies, Gale Hawthorne (Liam Hemsworth) comes to the fore here, and Hemsworth isn’t up to it, or a monologue where he describes the carnage in his home district. He’s incurably dull in the role; I’m considerably less high on this actor than I am on his brother Chris. (On the other hand, Hutcherson is considerably better here as the chemically altered Peeta than he was in the previous installments.)

Still, we can enjoy stuff like Natalie Dormer ditching the pretty dresses and the ladylike attitude that she sports on Game of Thrones for an American accent and a much more rough-and-tumble character here as a documentarian who follows Katniss around with a camera crew. Everyone is already on board with this saga or they’re not, and this movie won’t change anybody’s minds. Since I’m one of the people who’s on board, I’ll be sticking around to see what the filmmakers do with the series’ end.

Oh, and here’s the Lorde song that’s played over the movie’s closing credits. I’m including it because I can, and because I like it.