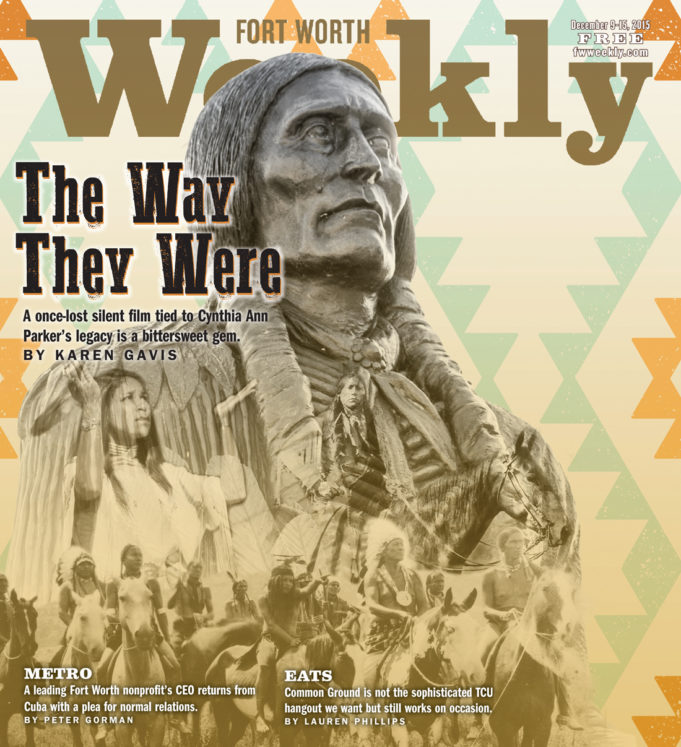 White Eagle has fallen for the Daughter of Dawn.

But the prettiest child of the Kiowa chief has more than one suitor. Black Wolf, despite Red Wing’s love and devotion, can offer plenty of ponies to the beautiful maiden’s father. All that White Eagle can give is himself, his bravery, and his love. The Daughter of Dawn must choose between the two men.

Sounds like a soap opera, but it’s actually a 1920 silent film.

The Daughter of Dawn was thought lost until 2005, when the 83-minute feature was discovered and restored. After screening at colleges all across the country and now becoming available on Netflix, the film written and directed by Norbert A. Myles comes to University of Texas-Arlington in February, prior to the school’s annual Powwow, a celebration of Native American culture.

The Daughter of Dawn “is not red face,” said Stephanie Vielle, president of the Native American Student Association at UTA. “It’s a very accurate portrayal of a life I don’t even know.”

Though full of action, The Daughter of Dawn is basically a love-triangle story, which isn’t entirely unexpected –– two of the stars, White Parker (White Eagle) and Wanada Parker (Red Wing), are descendents of the main character in perhaps the greatest real-life love-triangle story in early-American history.

But instead of choosing between two men, Cynthia Ann Parker had to choose between two cultures: her adopted Native American community and the “civilized,” white society of her birth.

We all know how that story ended.

Fort Worthians can be reminded of it pretty much every minute of every day. In the Stockyards is a statue of Quanah Parker, one of Cynthia Ann’s three children. The last Comanche chief, Quanah had 25 kids, including White and Wanada. Why the Stockyards? In 1909, Quanah, who performed in Wild West shows after his and most other tribes acquiesced to “The White Trail,” or life on the reservation, led 38 Comanche in full regalia as part of what is now the Fort Worth Stock Show and Rodeo. Quanah also led raids in Mexico and Texas, including Tarrant County as late as 1871.

At Log Cabin Village, a nonprofit living history museum near TCU, sits The Parker Cabin. Built in 1848 in Birdville, formerly the county seat of Tarrant County, the double-pen house was acquired by Amon G. Carter in 1927, restored, and then relocated to Log Cabin Village in 1959. The cabin played a large part in Cynthia Ann’s last few years. Though she was with her birth family, she was distraught and desperate.

Her story goes back to 1836, when she was 9 years old and taken captive by Comanches. When she was a teenager, she married one of her captors, Peta Nocana, and had two sons with him, Quanah and Pecos, and a daughter, Topsannah. In 1860, a company of Texas Rangers attacked a band of Comanches that included Cynthia Ann and her family. The Rangers forcibly took her and Topsannah to Camp Cooper, on the Clear Fork of the Brazos River, northwest of Abilene, to be identified. To her uncle, Isaac Parker, Cynthia Ann confirmed that she was the long-lost Parker girl. Against her will, she and Topsannah were taken by Isaac to his Birdville home, now The Parker Cabin. In her extreme despair to return to her Comanche family, she would wander off into the woods and slash her breast.

She stayed only briefly with her Uncle Isaac before being sent to other Parker relatives in East Texas. Topsannah died of pneumonia, and Cynthia Ann never got over her longing for Peta Nocona, her sons, and the life that she had grown accustomed to. She lived just four years after being returned to her Anglo relatives, whom she no longer considered her people. Brokenhearted and often refusing to eat, Cynthia Ann became ill and died in 1870.

From Ron Parker’s 160-acre ranch near southwest Oklahoma’s Wichita Mountains, where The Daughter of Dawn was filmed, the 73-year-old said he is proud that Cynthia Ann is his great-great grandmother.

“It was a hard life for her, a tragic life, to live in two worlds like that and be taken so young and live with the Comanches and become wife of the chief,” he said. “But she loved them. And she didn’t want to leave them.”

The Daughter of Dawn is important because it captures things as they actually were in early Native American communities, ways that some local Native Americans believe are dying out.

Cindy Famero, one of Ron’s two daughters, explained how, like in The Daughter of Dawn, teepees once stretched across the land.

“When things began to be acculturated, we started losing a lot of ourselves,” she said. ”We stopped being so connected. When they started putting fences up, it started tearing our families apart, because we lived in groups, we lived in tribes, we lived in clans, and we stayed that way. But then, they started saying you had to live in a house and, ‘Here’s some land.’ ”