I am not a Star Trek fan. I hung out with a lot of them growing up, but I managed to miss all the TV shows and most of the movies through the years. Next to the whiz-bang appeal of the Star Wars series, Trek‘s more cerebral approach to sci-fi seemed hopelessly uncool to me. Well, no more. 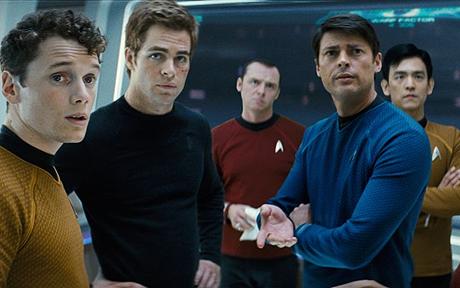 J.J. Abrams’ restart of the famous saga is a slick, well-produced piece of entertainment that blows the cobwebs off the venerable series. Diehards will flock to this movie regardless, so I’m glad to report to my fellow non-fans that this movie is a lot of fun.

The story reveals the origins of the series’ iconic characters. In the 23rd century, James Kirk (Chris Pine) is the son of a Starfleet captain (Chris Hemsworth), whom we see in a prologue dying heroically to save his crew, including his pregnant wife and the unborn James. The young Kirk is stuck as a troublemaking dead-end case in a small town in Iowa until a starship captain who knew his father (Bruce Greenwood) encourages him to make something of his life. Meanwhile, on the planet Vulcan, Spock (Zachary Quinto) enlists in Starfleet as an act of rebellion when he realizes that his fellow Vulcans will always treat him as a second-class citizen because of his human ancestry. Kirk and Spock meet at the academy and become none-too-friendly rival students until a rogue Romulan (Eric Bana) attacks Spock’s home planet, pressing Kirk, Spock, and the other cadets into action and forcing them to work together.

Without a doubt, the most surprising thing about this movie is how funny it is. Historically, science fiction and comedy haven’t always been best friends. The original TV show didn’t lack for humor, and the movie is a veritable laugh riot, with jokes ranging from little throwaway gags (the starship-shaped salt shaker that Kirk finds at a bar) to big set pieces (Kirk ostentatiously cheating his way through an unfair combat simulation at the academy). The crew of the U.S.S. Enterprise is played by a supporting cast stuffed with comic talent – John Cho as Sulu, Simon Pegg as Scotty, Karl Urban as McCoy, Anton Yelchin as Chekov – and they all contribute to the hijinks.

So do the lead actors. Quinto plays deadpan straight man to Pine’s antic, high-energy Kirk, and even their smallest interactions are rewarding, like Spock’s unamused reaction when Kirk gives him a jocular pat on the shoulder. They’re a well-chosen comedy team, which is good because Quinto does rather too much when he’s unmoored from Pine, arching his eyebrows and giving broad line readings that don’t suit a character whose impassive façade hides deep emotions. The supporting actors do their share of mugging, too, but when Urban and especially Pegg do it, it’s funny. Quinto needs to dial it down. (Then again, overacting is relative. Next to William Shatner, all the actors here look like minimalists.)

Pine carries his co-star and the rest of the movie as well. The tall, dewy-eyed 28-year-old actor is best known for starring in low-budget indies such as Bottle Shock and Blind Dating. This movie proves to be a near-ideal vehicle for his easy way with both action and comedy. Meshing well with the other cast members, Pine is brashly confident when he’s flirting with Uhura (Zoë Saldana) and calmly forceful when convincing his captain that the Enterprise is flying into a trap. Pine’s at his most winning when Kirk is made to look ridiculous, scoring big laughs from the indignities of an alien disease or losing a girl to Spock.

Of course, there are plenty of in-jokes for the fanbase, and all the TV show’s signature catchphrases receive an airing. (I could have done without them). It is worth having Leonard Nimoy return to portray the aged Spock, who time-travels into the plot from the future. Ingeniously, the time-travel element disengages this and subsequent films from the need to be consistent with all the other movies and TV episodes. The older Spock’s presence slows down the narrative’s momentum. Trek fans will be too busy shedding tears of nostalgia to care.

The film’s action sequences pale in significance beside these, though there’s a good one with Kirk and Sulu parachuting onto a massive drilling platform and then tangling with the Romulans guarding it. The space battles are done up with special effects far beyond anything Gene Roddenberry could have imagined, and Abrams (the TV veteran who moved into films with Mission: Impossible III) handles them deftly without losing sight of the characters.

We know that our heroes aren’t going to die, and in most movies that would only remove the suspense. Here, it adds to the picture’s general lightness. Perhaps this film is too light; it never duplicates the emotional impact of the prologue, when Kirk’s father dies hearing the crying of his newborn son. Regardless, so many recent summer sci-fi/action blockbusters have been dark and broody that it’s refreshing to find one that unabashedly sets out to entertain you and does the job without making you ashamed the next day. With the U.S.S. Enterprise staffed by such a fun crew, we can look forward to being with them the next time they boldly go where no one has gone before. l