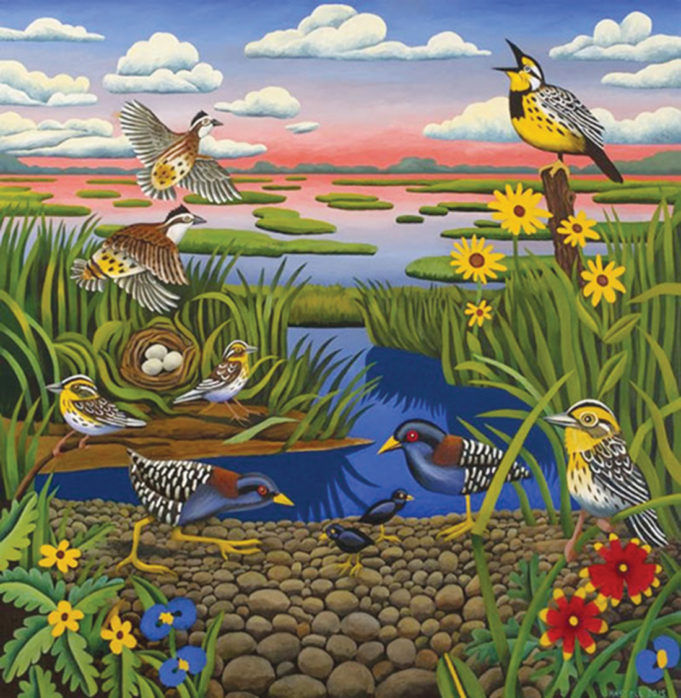 There is no substitute for being in nature. And there is no equivalent expression that translates nature into a satisfying two-dimensional experience either.

For as long as humans have stood in awe of it, we have tried to bring nature indoors, from caves to castles, cathedrals to chalets. When it’s been successful, it’s been because it was a new way of seeing (think camera lucida and later photography) or a new way of doing, like the paintings of the Fauves and Impressionists. With this rich history of both nature and landscape paintings, a lingering question remains: After all the questions about nature have been asked (National Geographic, Audubon Wildlife Society), why make nature paintings at all?

I’m not sure how to answer that question, so I looked for answers in the work. Locally.

If you live in North Texas and have gone out to see art locally at any point over the past 20 years, you would have come across Billy Hassell’s paintings, either at William Campbell Contemporary Art in Arlington Heights or the Conduit Gallery in Dallas. In Hassell’s new exhibit, Compass at Bill Campbell’s, a gathering of paintings, lithographs, and monoprints plus a survey of the artist’s work over the years, the painter introduces eight new works on canvas and five color lithographs commissioned by the Texas Parks and Wildlife Foundation in conjunction with Keeping It Wild, an awareness campaign launched in 2003 “to address the growing conflicts between black bears and people.” These large, colorful paintings, along with the rest of the pieces in the show, are a stylized depiction of the Texas landscape and its native flora and fauna, except for “Broken Compass,” a monoprint from 2005 that depicts, among other things, a clipped wing and other layers of fauna in monochrome.

Based on published interviews and writings on his website, it’s easy to conclude that Hassell’s passion is the environment and that he paints it as a way of making a connection with nature, showing how connected and interdependent we are with all things. It suggests that nature, like The Force, is everywhere. Close your eyes and feel it. The compass guides us to roadrunners, mockingbirds, wildflowers, and the cliffs of Dover. These pastoral connections to nature become to seem inescapable. But at what point does the message of environmentalism merge with really well done paintings and get lost in the picture? To be sure, there are various approaches to caring about our great state, and about the global environment, and they require efforts on multiple fronts. You can imagine a choice between showing the ugliness of the destruction of fragile ecosystems in Galveston by wretched oil companies (who wants to paint that?!) or revealing what would be lost if we didn’t recognize the gravity of that destruction. Hassell’s work focuses on the latter.

In “Cliffs of Dover, Powderhorn Lake,” there is a sense of the sublimity of the Texas coast. The painting depicts a cascading flow of windswept lake swells approaching cliffs during a big sky sunset. The composition is built around a red crane in flight, with wildflowers at the edge of the cliff. In another work, “Powderhorn Ranch, Gulf Coast of Texas,” there is a menagerie of animals in a marsh: flying cranes, hens, a Texas horned lizard, all against a purple sky. These images, along with other birds and fauna of Texas, is typical of Hassel’s style and is the cornerstone of his great appeal. He developed this interest as a child. As he reveals in his autobiography on his website, his penchant for gazing out the window at school, and drawing in his notebook, didn’t go unnoticed by the monks at Cistercian Academy in Dallas. It’s with their encouragement and his mother’s that his interest in art was nurtured. And with a childhood filled with exploring the very nature and landscapes in his work, it’s easy to see how strong this connection is. In “Kingfisher,” four lithographs from the same drawing become a concentrated study of his subject, separated by changing colors in the background. There is the danger, of course, that a work this good tends to lose its impact and conservationist clout to collectors who want it for the wrong reasons. For the record, and for the sake of art, there should be no wrong reasons to collect the art you like. But the reality is that if anyone within a 30-mile radius of TCU sees a painting with a horned frog anywhere in it, they’re thinking more, “Go, Frogs!” and less “Where have all the horny toads in North Texas disappeared to?”