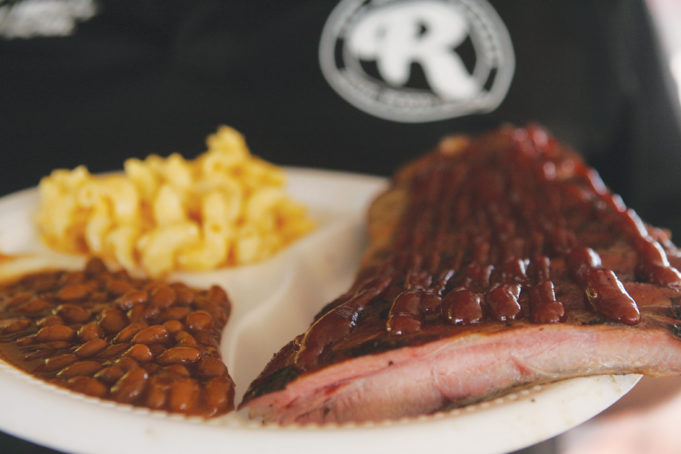 Rosako Bailey is a man who loves to cook. You can see it when his eyes light up talking about his vegetable sides. You might hear it in his conspiratorial whisper as he tells you about the signature twist he applies to his classic dishes. You’ll catch it in the way he and his staff tease customers about a new special that isn’t quite ready to roll out: “It’s amazing,” the young lady at the register said about a fried pork chop sandwich, still in the testing phase. “Come back Friday and check it out,” Rosako added with a wink.

The vibe was playful on a recent Tuesday night visit to Rosako’s Soul Food & BBQ, when my guests and I converged on the Bedford eatery, ravenous appetites in tow. Located in the repurposed shell of a former Taco-whatever, the tiny restaurant was broadcasting warmth and pecan-wood smoke out to the parking lot to welcome us in from the cold. Inside were about as many staffers as there were diners, joking and laughing across the open counter. Our host presided over the company and ushered us in to take our order.

Rosako’s is not a Texas barbecue pit house, nor is it a mainline greasy-spoon Southern kitchen. Instead, the menu features fresh and flavorful interpretations of traditional favorites. Though the owner has lived and cooked in the area for many years, he originally hails from Gary, Ind., and there are some items on the menu — like the bologna and cheese sandwich with a fried egg — that may be unfamiliar to Texans. Keep an open mind. He won’t steer you wrong.

We started with an order of fried green tomatoes, tart and tangy with a cornmeal shell that wasn’t too salty. The sunshiny disks were drizzled with an herb aioli that tasted like a backyard breeze.

If you show up expecting chicken and waffles, you might be disappointed — but only until you’re directed to Rosako’s rejoinder: the Thanksgiving 365. In the showpiece dish: tender cubes of smoked turkey with a crispy “waffle” made of cornbread stuffing. There have been some clever applications of waffle irons making the rounds lately, but using it for stuffing was transformative. There was texture, flavor, smoke, and fire — and the whole thing was drowned in homemade gravy and chunky cranberry sauce. The best chicken and waffles can’t compete, and neither can your mom’s Thanksgiving dinner. Sorry.

My guest ordered the pulled pork sandwich topped with coleslaw and grilled onions. The meat was smoky and not over-sauced and piled high on a toasted ciabatta roll. The thick-cut fries served alongside were pretty good, too, but the other side dishes are where the kitchen really struts.

One of the great puzzles of macaroni and cheese is how to get a smooth, creamy texture without using processed American cheese-food. The chef had it figured out, somehow creating a decadent, silky sauce with all of the punch of extra-sharp cheddar.

The collard greens were spicy but not greasy or salty, despite being cooked down to a paste. They retained a garden freshness that wasn’t obliterated by pork fat.

Black-eyed peas took on new life in a crisp salad spiked with tricolor peppers and red onions, lightly coated with a lemony vinaigrette. The peas had a perfectly al dente texture more reminiscent of Israeli couscous than mushy canned beans

Perhaps the most unexpectedly delightful side dish was the watermelon salad. Seedless chunks of the fruit were tossed with feta cheese and Kalamata olives. If a treat like this doesn’t sound like your idea of soul food, then by all means leave more for the rest of us.

Now about the meat: If one can lay aside a Texan’s natural predilection for beef brisket, there is a lot to enjoy at Rosako’s. In addition to the succulent pulled pork, there are rib tips that fall off the bone and hot links that melt in your mouth. What comes through in all the barbecue offerings is the wholesome, mild taste of pecan smoke infusing a meat that holds its juices closer than a full house.

Try to save room for dessert: The sweet potato spice cake was dense and luxurious, and the banana pudding with chessmen cookies had a homemade hint of scalded milk. If your host offers to drizzle them both with marshmallow cream, let him do it — you’re in good hands.