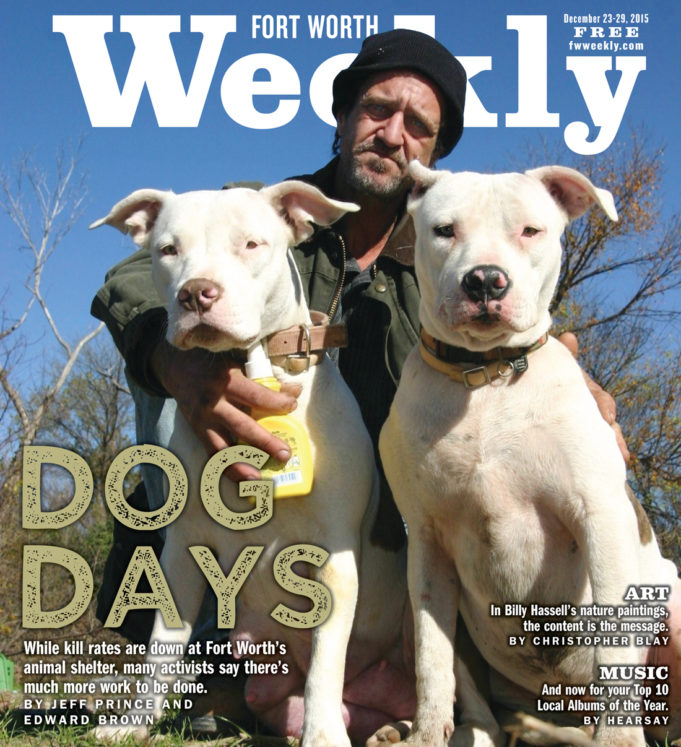 Figuring out why the Fort Worth Animal Care and Control shelter is packed with hundreds of animals is as easy as driving around town. The Eastside neighborhoods are a good place to start. Suzette Watkins, who owns an Eastside kennel, sees problems develop all around her on a daily basis. Last week, we drove along street after street lined with small houses. “Beware of Dog” signs hung from many fences, with pit bulls of various lineages appearing to be the watchdogs of choice. It’s no coincidence that most of the dogs sitting in cages at the shelter appear to be pit bull mixes.

Lawbreakers abound all over town, particularly in poorer areas. Owners chain their dogs to trees and fences, or allow their pets to run loose or bark at all hours of the night, or don’t spay or neuter them or bother to pay $50 for the city’s intact pet permit that allows owners to breed animals. Police aren’t proactive in enforcing the pet laws. Officers respond to complaints but give negligent pet owners numerous chances before hitting them in the pocketbook with a citation.

City figures don’t break down pet citations by individual offenses. Code compliance officers issued 7,274 citations during the past two years to residents failing to get intact pet licenses, city pet licenses, or rabies vaccinations. That figure breaks down to less than .0005 percent of residents.

Watkins is a frequent complainer. She’s frustrated by police inaction and is the shelter’s loudest critic. Six years ago, she created No Kill Fort Worth, a loose-knit group of animal advocates pushing for lower kill rates at North Texas shelters. On the group’s Facebook page, members toss anecdotal grenades at the shelter and share videos of Watkins confronting hapless pet owners. In one video, she knocks on a door, and a Hispanic woman answers.

“Is that your dog?” Watkins says testily.

“Why is that dog out on the street?”

“Because she came out to poop.”

“You let a dog out to poop without a leash? That’s against the law. That dog ran in front of my car, and I came within one inch of hitting your dog.”

The homeowner begins calling her dog to come inside while being harangued by Watkins. The dog finally comes but gives wide berth to Watkins before sprinting inside.

“She doesn’t like you,” the woman says with a smile before shutting the door.

In another video, Watkins berates a couple after finding their pregnant dog standing in a roadway.

“Fix your dogs,” Watkins barks, cutting him off, “so they don’t have puppies and create more homeless dogs.”

“Yes, you are. Yes, you are. What are you going to do with all your puppies? You don’t know. You can’t control one dog much less …”

“We have people that want them,” the man says with forced politeness. “Thank you. Have a nice day.”

Watkins is gentler on a recent visit to a homeless camp. She’d seen a stocky white pit bull almost get run over on Riverside Drive a couple of days earlier and watched the mongrel head down a dirt road toward an abandoned drive-in movie screen.

“Most dogs will run right back home,” she says.

We drive down the bumpy, muddy road until we come upon the screen that can be seen from I-30 near the Riverside Drive exit. Homeless people rely on the screen as a windbreak in winter, setting up their campsites at the base. A mama pit bull who’s obviously birthed a litter recently is rummaging through the trash strewn around the site. A smaller pit bull stands nearby. Another is chained to a post and barking at us.

A man appears from underneath the screen and walks toward us while eating. He is holding a hot dog bun in one hand and a squeeze bottle of butter in the other. Another stocky white pit bull follows him.

“This is why our shelters are full,” Watkins says to us in a low voice. “These homeless people pimp out their dogs for money. The city doesn’t give a crap. They do not enforce intact dog” rules.

When the man walks up to us, Watkins is direct as usual but speaks with a friendly tone.

“Where are her puppies?”

“They are inside my place,” he said. “I’ve pretty much got them all given away.”

“Given away or sold?”

“I’m giving them away. Would you like one? Unfortunately they are mixed.”

“How come she isn’t spayed?”

“I was wanting to breed her once. This is Sassy.”

The other white dog is Sissy, the proud aunt of Sassy’s brood. Sissy belongs to the man’s girlfriend.

“My girlfriend had an appointment for her dog to get spayed, but she checked herself into rehab and missed the date.”

We ask if the dogs are for protection.

“I protect her more than anything,” he says, hugging Sassy, who licks his face in return. “I fell in love with her. She’s just a bundle of joy. She’s my baby.”

A woman hollers that we’re on private property as another man approaches us from underneath the screen. Watkins has visited this camp several times in the past while alone. She remains cautious but says she doesn’t worry about her safety.

“Y’all have too many dogs here,” she tells the new guy who is approaching her. “You can’t take care of them.”

Within minutes, Watkins has both men agreeing to get all the adult dogs spayed and neutered. The men say they’ll take the dogs to the Humane Society of North Texas, which is within easy walking distance, if she’ll get them free vouchers.

Watkins climbs back in her car and heads toward the Humane Society’s clinic. People who want free vouchers need a computer and e-mail address to register. Watkins wants to cut through the red tape.

“They have those 10 puppies and probably six adult dogs,” she says while driving. “None of them are spayed or neutered. … The males will fight. Those 10 puppies will find 10 people who will breed them. This is why we have an issue.”

Animal enthusiasts have been bringing up numerous issues, most of them aimed at the shelter. They accuse shelter staff of mistreating animals, botching surgeries, and employing until recently a veterinarian with a history of state reprimands for failing to attend required training classes. The activists are angry that popular shelter superintendent Sandy Shelby and other employees were put on administrative leave for mysterious reasons and appear to be losing their jobs. But many volunteers and activists say those employees, led by Shelby, were addressing problems that began long before she was hired last year. Now people wonder if pointing out the shelter’s problems might have cost the employees their jobs.

The City Council recently created the Animal Shelter Task Force to investigate ways to improve the shelter and reduce the thousands of animals that are being euthanized and sent to the city dump each year.

Of course, shelter staffers aren’t filling the streets with stray animals. They’re simply charged with cleaning up the mess. The problem begins with irresponsible pet owners, and there are plenty. Some people –– maybe you –– don’t get their pets spayed or neutered and let them wander. A little friskiness goes a long way, leading to pregnancies and litters that perpetuate themselves into large numbers of trash-eating, sickly, pitiful car targets.