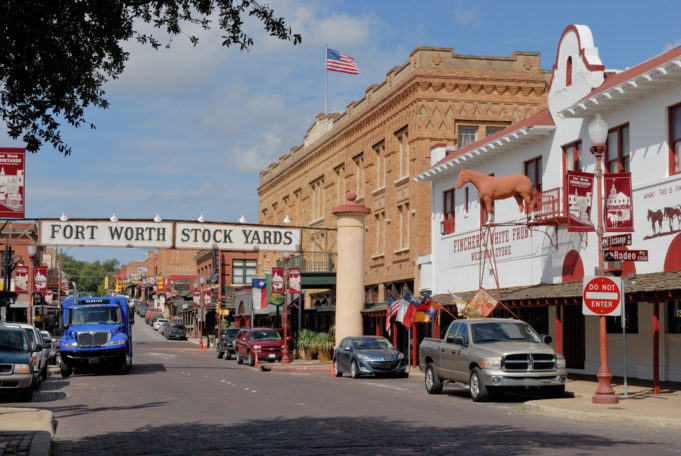 Thought the Stockyards was already “historic”? Think again. A large swath of it –– Exchange Avenue east and west of Main Street and north to Stockyards Boulevard –– is unprotected. It has been for decades.

This is important because construction crews are about to begin work on a $175 million project in the area. Featuring open-air green spaces, restaurants, and retail, the unnamed development by Los Angeles’ Majestic Realty may change the face of our Not-So-Wild West.

“I was shocked,” said Philip Murrin, son of the de facto “mayor of the Stockyards,” whose family owns several properties in the neighborhood, some falling within the shadow of the wrecking ball.

Last year, not long after Majestic announced its plans, Fort Worth City Council created the Stockyards Design Task Force. Consisting of 14 local movers and shakers, including representatives from Majestic and the city, the group recently agreed on a proposal to temporarily freeze demolitions in the Stockyards, nominate the heart of the Stockyards as a historic and cultural landmark, and recommend that city council adopt a form-based zoning code that could one day specify what types of buildings are eligible for construction.

Next month at 1000 Throckmorton St., Fort Worth’s 9-member Historic and Cultural Landmarks Commission will begin hearing public comments on the proposed historic landmark designation, a label that would protect buildings within the overlay from future demolition and add restrictions on how existing structures can be altered.

As recently as July, Majestic vice-president Craig Cavileer told reporters that his group is “going to take charge of [its] buildings. We’re going to do the right thing and [preserve] the storytelling of the Stockyards.”

He said there isn’t a “need” for a Stockyards task force.

Murrin said he respects Cavileer’s position but that area property owners and the community at large need to have a say in the Stockyards’ future.

“Majestic is a very successful retail development company,” Murrin said. But, he added, “if you don’t have rules in place ahead of time, the future can become a slippery slope.”

During a city council meeting last month, Councilperson Dennis Shingleton summed up the tension: “I truly believe there is a mistrust factor on both sides. If one side says it’s Tuesday, the other side runs to check the calendar. It’s that bad, as I perceive it.”

Several business owners, through comment cards and presentations at that same meeting, expressed concern over the task force proposals, which later passed unanimously.

One property owner told city council that he doesn’t want the building restrictions that come with a historical landmark designation.

“I believe in my property rights,” he told the council. “I don’t need anyone telling me what I need to do with my property.”

Murrin said he and his family are pro-development, but growth needs to happen with an eye to the future.

“Preservation is about this generation committing to future generations,” he said. “We pay our respects to our forebears, and we guarantee that future generations are able to learn from what happened here. The Stockyards represents this city’s first industry. It’s what took Fort Worth from being a prairie outpost to a metropolitan city. I think that’s important.”