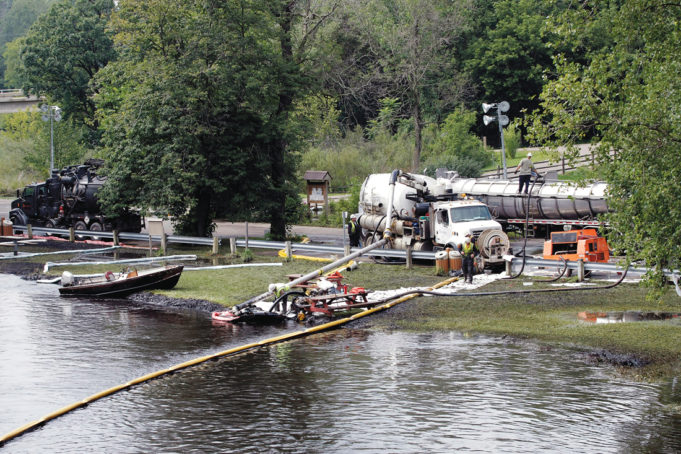 A new study of the hazards of tar sands bitumen to the environment rakes the filthy hydrocarbon over the coals. Released in prepublication form earlier this month, the study wasn’t conducted by just any organization. It was the National Academy of Sciences, the most prestigious scientific body in the United States.

In Spills of Diluted Bitumen from Pipelines: A Comparative Study of Environmental Fate, Effects, and Response, the academy makes it clear that tar sands spills have a disastrous effect on the environment, particularly bodies of water, and that there is no protocol in place to prevent worst-case scenarios. The academy also underlines the point that diluted bitumen spills cannot be treated like other oil spills.

Diluted bitumen, dilbit, is made from combining tar sands (tar mixed with sand and rock) and light gases to liquefy the bitumen enough to travel through pipelines or by rail cars to refineries. If sent through pipelines, the material moves under extremely high pressure to keep it from congealing into essentially thick tar.

The Keystone XL Pipeline, which was scuttled in November by President Obama on the recommendation of the State Department, would have carried diluted bitumen from the tar sands quarries of Alberta, Canada, down to Cushing, Okla., and from there on to Houston refineries. From Houston, the refined product would be shipped to the foreign free-trade, no-tax zone in Port Arthur to be shipped overseas. The public debate over the Keystone, as well as the disastrous 2010 diluted bitumen spill that poisoned miles of the Kalamazoo River in Michigan, were major reasons the U.S. Department of Transportation requested that the National Academy of Sciences conduct the study.

The findings were surprisingly clear. First responders to a diluted bitumen spill have a very short window of time in which to contain the spill before the gas used to dilute the tar sands separates, leaving basically tar, which sinks in bodies of water and then adheres to the bottoms of rivers and aquifers, making it nearly impossible to clean up.

“This situation,” the academy writes, “is highly problematic for spill response because 1.) there are few effective techniques for detection, containment, and recovery of oil that is submerged in the water column and 2.) available techniques for responding to oil that has sunken to the bottom have variable effectiveness depending on the spill conditions.”

The academy establishes without a doubt that if the response occurs within the initial window of opportunity, before the light gases separate, the spill can be contained via traditional methods. But the cleanup time for traditional crude oils, the academy says, is simply not long enough for cleaning up diluted bitumen.

A spokesman for TransCanada, the energy giant that owns a large area of tar sands and the existing Keystone 1 and the Keystone Southern Extension pipelines, told the Fort Worth Weekly that the company regularly works on emergency spill exercises. David Dodson, senior communications specialist with TransCanada, wrote in an e-mail that the company “conducts more than 100 emergency response exercises each year. Some of them are internal tabletop exercises, but … one conducted on the Missouri River near Yankton, South Dakota, at the end of September, 2015, involved more than a dozen contractors, emergency responders, state and federal agencies. … A key message to the more than 100 participants in [the exercise] is the urgency around any spill but especially around water.”

Josh Axelrod, a policy analyst with the Canada Project of the National Resources Defense Council, which released its own report on diluted bitumen in 2013, was happy to see the academy’s study. “No one has the technology to clean this stuff up,” he said. “They basically say that if something happens, you’re just out of luck.”

That something happened on July 25, 2010, when a pipeline owned by the Canadian company Enbridge Energy carrying diluted bitumen ruptured and spilled a little more than 1 million gallons of the material into Talmadge Creek, Mich., which runs into the Kalamazoo River. More than 35 miles of the Kalamazoo were contaminated, and more than 40 families who lived along the river had to be evacuated. Enbridge initially thought the spill could be cleaned up for about $5 million over the course of several weeks. The cleanup actually took more than five years and cost about $1 billion.

Rita Beving, an organizer with Public Citizen, a nonprofit devoted to environmental issues, thinks the same situation might occur in the Texas portion of the Keystone’s southern leg: “The pipeline makes 531 water crossings, including five major rivers here in Texas, so we’ve got an incredible amount of risk from that pipeline to our water supply.”

Jane Kleeb, founder of Bold Nebraska, an organization that fought TransCanada over the company’s right to seize land by eminent domain in Nebraska, said that she and her associates had waited anxiously for the academy’s study to come out: “The report that the academy did was very important, because companies can no longer deny the near impossibility of cleaning up diluted bitumen.”

Kleeb said that when TransCanada approached landowners in Nebraska to buy the rights to lay the Keystone XL, the company downplayed the risks: “TransCanada told landowners that if there was a spill they would not only clean it up quickly but that the land would be in better condition than it had been before the spill. That was a lie, and this report makes it clear that the company knew it was a lie. There simply isn’t any technology that can really clean it up.”

Ramsey Sprague, an environmentalist who was an important part of the tar sands blockade (“Drawing a Line in the (Tar) Sand,” Oct. 17, 2012), is glad the study has come out. But he’s upset that it took so long: “Until now, the only available science has been the false science that Exxon — the largest player in the Alberta tar sands — and TransCanada have put out. The people in Kalamazoo and the people in Mayflower, Texas — site of a major Exxon diluted bitumen spill in 2013 — who had this toxic sludge pouring through their river and yards, knew the problems with this material, but Exxon and the other companies acted as if they didn’t while they gambled with life and the environment to move this material. That it took so long to have non-biased scientists look into the diluted bitumen issue speaks to the degree of control these companies have over regulators and regulations.”

NRDC’s Axelrod feels there’s still lots of work to do: “The call for a new regulatory regime for the transport of this material, along with protocols for both preparedness and response to spills, is a major focus of this study, and we at NRDC would like to see those things implemented. But for it to happen will depend on public pressure. If there is enough pressure, the Obama administration could certainly put several agencies to work at creating those new rules. But all the regulations in the world will not clean up a spill if we don’t devise the technology that can clean this material up.”

TransCanada’s Dodson said that the energy giant spends “millions on research and development each year. … The focus is on preventing leaks and spills in the first place.”

He could not say whether TransCanada was conducting any research on how to actually clean up those spills when they occur.