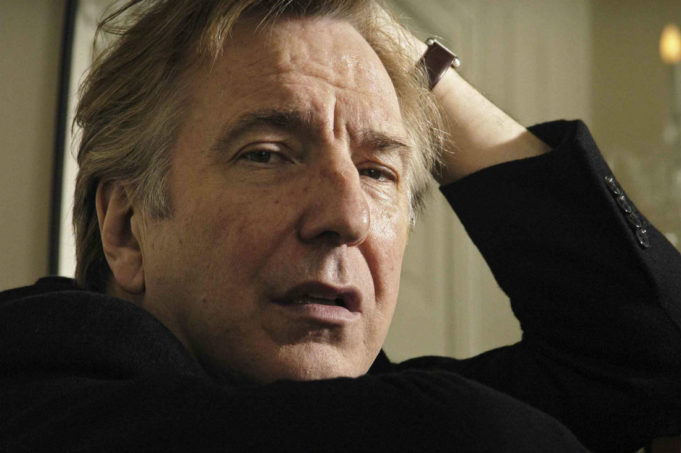 I remember the first time I saw Die Hard, there was one scene in particular that impressed me. It was when Alan Rickman’s terrorist leader, Hans Gruber, goes off by himself in the middle of the movie and finds himself staring down the barrel of a gun held by Bruce Willis’ hero. What does Gruber do? He pretends to be an escaped hostage, putting on an American accent and cringing in fear. I saw that and thought, “Oh, crap!” This is what makes Hans such a formidable villain. Of course, he’s in charge of a bunch of guys with guns, ruthless enough to execute his captives, and wears the sharpest suits available in 1988. But it’s his cleverness that makes him really dangerous, his ability to adapt to an unexpected situation, and his willingness to make himself look weak. All of that came through in that one scene. I thought of that moment when I heard the news that the British actor died yesterday at age 69 after a battle with cancer.

He often played cultivated types like Hans Gruber, thanks to that extraordinary sable-like bass voice he possessed, redolent of cigar smoke, dark chocolate, and English treacle. The thing is, he was born into a working-class family in London shortly after World War II ended. He studied to be a graphic designer and worked as one for three years before giving it up for an acting career. He came up the way so many other British actors have done, working his way through the ranks of local theater troupes until he landed with the Royal Shakespeare Company, playing Valmont in a 1987 production of Les Liaisons Dangereuses, getting nominated for a Tony Award.

He was 41 years old by the time he got to Hollywood, and he was offered the role of Hans Gruber two days after he arrived. His film debut got his career off to a roaring start, as he quickly became cast as the similarly evil Sheriff of Nottingham in Robin Hood: Prince of Thieves. However, there was an early role that proved he could do more than just play villains. It was in the great 1990 romantic comedy Truly, Madly, Deeply, where he played the ghost of a deceased boyfriend who appears to Juliet Stevenson’s heroine. He plays up the character’s neatnik fixations and reminds the heroine and us that this guy could be annoying when he was alive. At the same time, he’s a comforting presence to a grieving woman, and this scene illustrates why, as they sing an old Frankie Valli song and provide a burst of pure sunshine:

He spent a lot of time trying to get out from under Hans Gruber’s shadow, and to that end gave two sparkling comic performances in 1999. As an angel who serves as God’s spokesman in Dogma, he struck a great balance between his character’s grandeur and exalted position and his exasperation at dealing with puny humans and renegade angels. When the heroine sprays him with a fire extinguisher he says, “Do you go around drenching everybody that comes into your room with flame-retardant chemicals? No wonder you’re single.” Then in the ahead-of-its-time fanboy comedy Galaxy Quest he played a British actor who found his greatest fame portraying a space alien on a science-fiction TV show and did a variety of slow burns off this thespian’s “so this is what my Shakespeare training has come to” outlook.

He played the part of the libertine Judge Turpin in Sweeney Todd, and while many stage actors have played the character as a lecherous old man, Rickman portrays him as more of a thwarted romantic who brings flowers to Todd’s wife (raping her only after she refuses his advances) and sings “Pretty Women” with a faraway look in his eye. The approach makes the judge more human without lessening his evil. Even in an otherwise forgettable movie like the wine dramedy Bottle Shock, he could find a telling moment playing a British oenophile washing up in California in the 1970s. There’s one throwaway bit where he’s presented with a bowl of guacamole and you can see this Englishman thinking, “What’s this green goop they’re placing in front of me?” before he takes his first taste of the stuff.

Of course, many younger viewers remember him best as Professor Snape in the Harry Potter series. Initially, he seemed to fit the role a bit too snugly, but as the character became more than just a teacher who didn’t like Harry for some reason, Rickman grew into the part. J.K. Rowling told him about Snape’s hidden past before it was published in the novels so that he could adjust his performance accordingly. By the time Snape is killed in the last Harry Potter movie, he has become a figure of tragic proportions, a hero brought to his end by love, courage, and weakness, and it’s only after he’s gone that the student he tormented so much learns what he did.

Despite some stumping by Daniel Radcliffe for that latter role, Rickman never got an Oscar nomination. However, the outpouring of grief that greeted his death is testament to both the person he seems to have been offscreen and to the intelligence, pissiness, and sheer fun he brought to even the most detestable roles. He is gone, but his contributions are well appreciated.