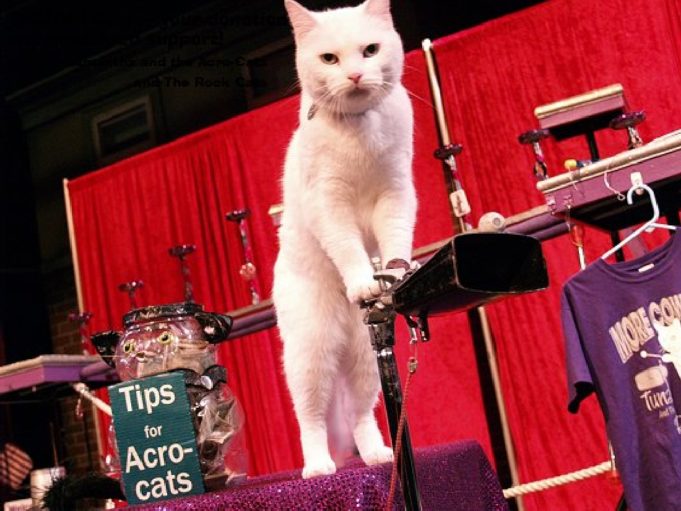 Before last evening’s production at Stage West theatre, songs like “What’s New Pussy Cat” and “Cat Scratch Fever” played from the speakers overhead. Everyone in the audience and on stage wore cat-ear headbands, and an array of cat toys and perches were arranged on a small platform. A woman with colorful dreadlocks wearing a corset dress took the stage and began spewing a ceaseless barrage of cat puns that continued throughout the night.

Then, a groundhog crawled out from a nearby cage and waddled up to a microphone –– the little critter was chewing so it looked like it was talking –– and an offstage voice announced the beginning of the show. With that, the atmosphere went from kitschy to wonderfully bizarre.

A woman clad in tight black clothes reminiscent of Catwoman appeared from behind a curtain. She told the audience her inspiration for the show, which is to inspire people to train their cats. She went on to admit that training a cat is not easy, which turned out to be prophetic.

The cats couldn’t completely quell their inner jerks. Some of the presentation’s most charming moments involved the felines obstinately disobeying their handlers, and straying off to some other part of the auditorium seeking attention from audience members.

Most of the cats took their time to stretch after being let out of its cage, which was equally cute and audacious. The trainers’ added another layer of yucks when they reacted with expressions like they were used to this kind of stubborn behavior from their furry circus animals.

When the cats did listen, their tricks were amazing. Each one had its own specialty, from feet weaving to long-distance jumping to climbing and rappelling. When several of the cats assembled to form a band, the music was terrible, but the aesthetic was adorable. The lead trainer, Samantha, said the audience was witnessing the only cat band in the world.

Every time one of the cats reached out its head out to brush against the trainers, the crowd ate it up like Fancy Feast. Samantha told the stories of how each cat was rescued, which further ratcheted up the cute factor, and made the show more poignant.

The humans responsible for the organization of the show did a good job making sure the audience always had something to watch –– although they shouldn’t get all of the credit, since the cats decided what was going on just as much as, if not more, than the humans.

The corny cat puns did end up getting old, but that just goes with the territory of doing all-cat production.

What was surprising was this performance wasn’t only about a bunch of cats doing tricks. The show featured other animals, like a chickens, that were trained to obey commands. Still, the main thrust of the show showcased some very well-behaved cats as well as well-trained humans, and supported the cause to adopt shelter kitties.

The show’s humor, though mostly corny, was endearing. The cat adoption cause is an important one, and the cats and other animals seem happy bringing joy to their audience –– whenever the audience cheered them on, they performed more obediently.

Going beyond first impressions of the overbearing cat humor, the show seems to be a rarity of an experience. It’s one worth gaining for the fun of it, if not just for the novelty.